This post is somewhat of a rant.  I take considerable care to make sure that I’m evenhanded in my opinions.  In this case I’m reviewing my attitude to the the BBC.  This is an excellent film (below) which shows the bias the BBC and their unwillingness to engage with those who disagree with them..  What I like about this interview is its measured page and thoughtful nature.

After watching this video I got the most enormous sense of relief because I realise that I was being fed the BBC’s version of the truth and unwittingly absorbing it. This never sat well with me but today is a seminal day when I finally realised this and how carcinogenic it is and distorting my mind set. This is another video about the ‘British Biased Corporation’.

The second video that I have been watching is of  one of my heroes, someone who goes round talking about his subject namely electromagnetic radiation.  He never takes a fee or travel expenses and is one of the few people around who dedicates himself unstintingly and without any wish for personal recognition. His name is Barrie Trower and I would like anyone who does any public speaking or any research to take good note of how this man works as well as what he says.  I admire his making himself available to anyone who wants to come round to his house,see original documents and question him, and take away copies of any material required.

A news item item that impressed me most for all the wrong reasons was this young madam (below) who screamed and kicked pilot of an aircraft because she was refused leave to take her buggy on the plane.  What are these people playing at?  What is in their mind? Do they have anything in their mind? 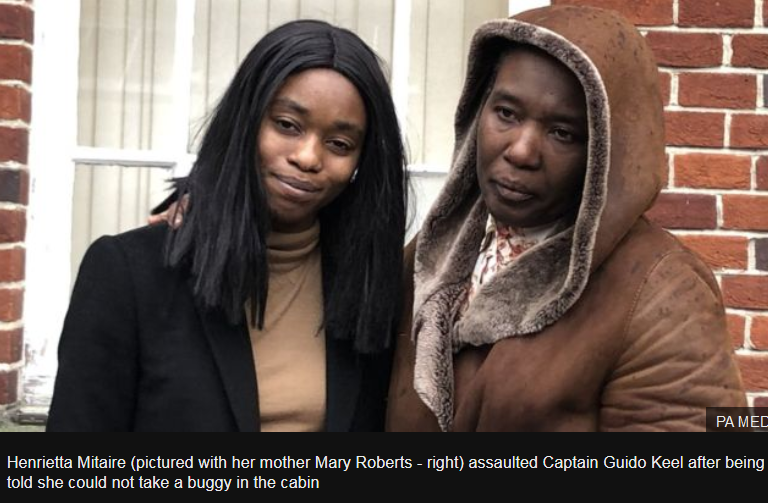 This is the lady concerned (below)  trying not to look embarrassed. I’m talking about the daughter on the left-hand side of the picture. She denied all the charges against her. Below, is another picture of them outside court behaving just like people who are innocent. 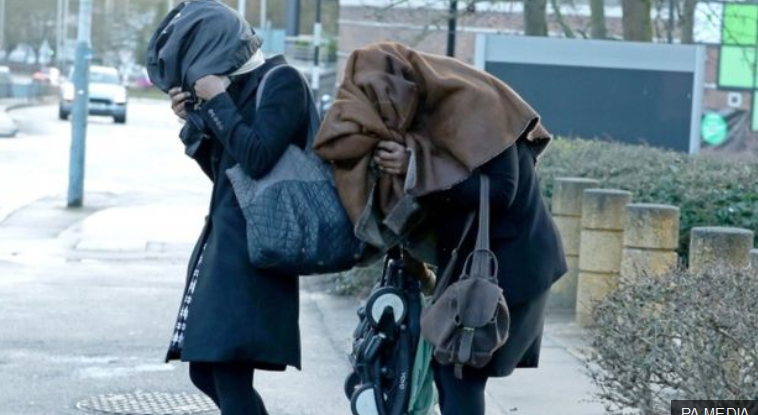 I mean, that’s the way you would behave wouldn’t you.  I find some of these people of colour surly, resentful, on the borderline of appearing stupid and attempting to use the race card when they possibly can. On this occasion it did not work, the judge found  accordingly. If people are visitors to this country or even living here they should respect the country and its rules. If I went to Africa and I behaved badly I would expect short shrift. I think we are so afraid of being seen to be discriminatory that we lose our minds and our courage. I don’t think we are helped by the judicial system and Political Correctness so maybe we deserve all we get. Page link here.

My local authority, Bath and West Somerset have set their own rates or shall I say council tax for the next year.  They have included in this an allowance for “addressing climate change”.  The sum?  800,000 pounds. It is amazing how people can be bullied and frightened into believing for one single moment that we can prevent the long time workings of this mighty planet and its dynamic reaction with the source of all life, the sun.

What with one thing and another, 5G, climate change, viruses, anyone would think that the powers that be are trying to frighten us into conformity.  They wouldn’t do that would they?

As wise man and long time observer David Icke has said, in order to be rational you need to be calm. if you look at the papers this morning you might think the world was going to end due to this Coronavirus.  Even the death of one solitary person in a country is a declaration of a forthcoming pandemic for some specific reason.  It is interesting to note that seasonal flu kills many times more people than the virus so why isn’t seasonal flu declared a pandemic?  Back in 2017, between 291,000 and 646,000 people worldwide die from seasonal influenza related respiratory illnesses each year.  My goodness that’s a tight statistic isn’t it.  Think of a number and double it. The authorities are not even quite sure what type of disease it is but don’t worry they will make something up.

Today I had a telephone conversation with a doctor in the practice that I’m registered with. These days, most of the contacted by telephone unless a visit is necessary.  As unknown patient, I do appreciate this and the savings in time.  You ring in first thing in the morning before 8:30 and you will get called in the morning and the same goes for the afternoon, you calling by about 2 PM.  I was complaining about the vomiting that I mentioned yesterday.  I was discussing whether it was due to a gastro virus,  bad eating habits or something dysfunctional in my digestive system.  I gave the symptoms to the doctor, tried to be as truthful as possible and got the answer that it was a bit too early to decide if it was something serious and that I should eat bland food, drink plenty of water and observe the situation.  I have done so, and I’m glad to say that today was much better.  I’m having to take my allopathic medicine but it’s a small price to pay for not throwing up.   On that note, I close.