I woke early and listened to snippets of business news mostly following the agenda of panic and fear.  Fear and insecurity is one of the best ways of controlling the population.  A discussion of how long business will take to recover and a suggestion that lockdowns would continue for six months but not in the aggressive form that it is at the moment.  Dozed in bed until 9 AM.

The temporary paperboy had a crumpled list and scrutinised it to see where my morning delivery should be.  Cup of coffee in hand, I rescued him from his misery and greet him in a cheery fashion.

I sent a letter out last evening to about 50 people in my men’s group and have had some sensible replies which I look forward to reading.  These times will be when mutual encouragement becomes very important and I hope the habit will continue after the hue and cry has died down.

To our local bakery to buy some sourdough bread. I mentioned to the server that another bakery had closed.  Evidently the woman who has taken it over recently has three young children.  They are difficult enough to deal with at the best of times.  Her husband is a lorry driver so she had to close the shop not for hygienic reasons but for family reasons we can say.

I telephoned Alan my tree surgeon to ask him if he was working normally.  Apparently, he is working normally and said that he thought there was a lot of hype by the government. We had a good-nurtured laugh and a joke. 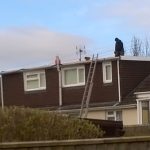 There was a tap tap tap  from an unknown source so I investigated and found that someone was doing roof repairs, a little bit eerie it was amongst the silence.

We are off to finish the gardening job and hopefully I can put a little bit of money in the bank that will help pay the council tax which is due tomorrow or the next day. In the mornings, Francoise  will not do anything without two cups of tea so I wait until she has finished, washed her hair -the usual routine and then off we go.

Whilst I was doing the gardening job I wandered around to see what was going on.  The chap next door opened up and came out of the door for some reason.  I said to him that I admired the work of the hedge cutter who lived adjacent and I was trying to speak to him.  Although I was outside his property he suddenly jumped and said “don’t get too near me”.  I realise that this man was traumatised from the news.  These are people who will do anything they are told.

I saw lying in a garden a “Titan” petrol hedge trimmer. One of the beauties of the Internet is you can find pretty much anything you want and I was looking for someone who had used the trimmer, which seemed to me to be pretty well-designed.  I don’t much care for electric trimmers.  They don’t seem to be as powerful as petrol models.  I found the right Youtube video which answered all my questions. I was attracted by the £99 price. When the season gets into gear, I will consider it.

Anyway, the lady was very pleased with our work, she paid accordingly and off we went to the post office to pay in the proceeds. The lady behind the counter is Chinese.  She is always smiling.  Today, I could not tell if she was smiling because she had a mask on no doubt under instructions. I teased her saying that I could not see her smile and she had promised that she was indeed smiling. 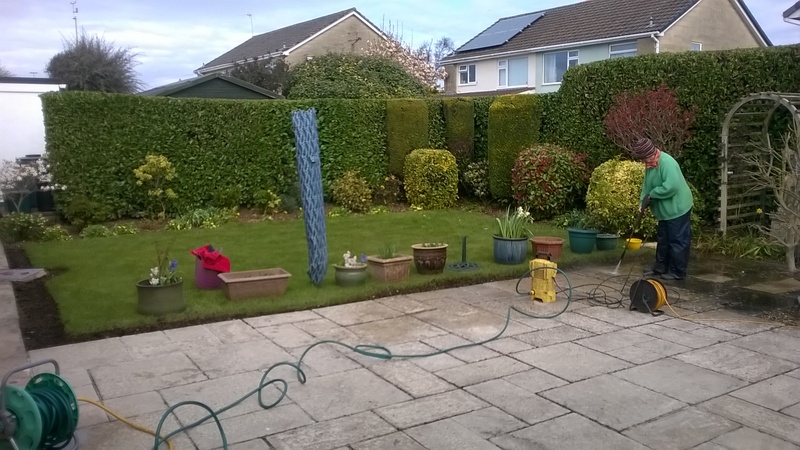 I went to The Green Shop which is bravely staying open on Monday, Wednesday, Friday, from 10 AM to 4 PM.  There is a rule that only three people can be in the shop at the same time.  Three people were in there, a mother and her two children lingering around, completely unaware that they were stopping other people from coming in.  A man was standing in the small queue and he said something that I’ve never heard said before.  “These people had the intelligence of a Bournemouth pig”.  This must be a very local saying because I have never heard of it.

What came across was his attitude, just giving up against the world. This is another ‘lamb for the slaughter’ when they ask us – for our own good of course – to have vaccinations and even to have microchips.  The end days have arrived.  This is not theoretical, it is practical, it is here now and being run out at lightning speed before enough of the population wake up. If people wake up we can do a push-back so take heart.

To Tescos. Petrol at £1.05 per litre!! A quick twenty Quid’s worth and then into the Supermarket about 6pm.  Very few people. Certain empty shelves but good order, no panicking. The worst of the madness is over?

Watching a great video by David Icke … Fiddling The Figures – The Magic Trick – David Icke ‘Virus’ Update. He gives facts from scientists.  Shocking. In Italy, 99% of those that have died from alleged covid-19 have had 1,2,3 or more other health conditions which has compromised the immune system.

Anyway I have been on the case all day, populating my website, so time to sit in front of the fire and chill.