My website has benefited in popularity by the fact that people have got more time at home in their isolation and that the subject matter, 5G and the coronavirus, is a matter of interest. My figures are nothing compared with the big sites which have hundreds of thousands of visits per day but I like to think that people who visit my site do so with a purpose. We are told to ‘cast our bread upon the waters’ and in a way be detached from the result but it is pleasing to see this rise. At 10 o’clock this morning I have more page views than the whole day, two weeks ago. 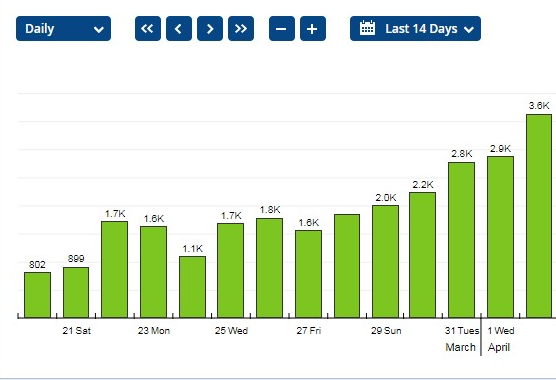 Last night, I did not sleep so happened to tune into BBC Radio Three.  I heard an exquisite rendering of the four ballades of Chopin by Marianna Shirinyan. This was such balm compared with the 24/7 alarmism about the you know what.

Francoise told me that on the Ile de Re in France people are not allowed to walk on the beach – the very activity that would bring health. This has gone crazy. There are no police where I am so I just go about my business.

I have a new problem in that YouTube are removing all the videos they consider ‘fake news’ i.e. those who tell the truth. This adds to my cost because I have to save a video on another platform which costs. No such thing as a free lunch. Also, I am using substantially more bandwidth.  In March I was using 80 GB and goodness knows what it will be this months with rocketing viewing rates.  I can’t really afford to see the costs escalate so I must find some way of getting people to actually donate.  With the state of mind that people are in at the moment that is like getting blood out of a stone so I might get them to buy me a coffee.

To Radstock to the bike shop to have Françoise bike repaired.  I did say to her that she should call but she said that she had called on Wednesday and they said they would be open.  Things change fast.  The shop was closed.  However, we went to a local supermarket called Proper Job and did some comfort buying.

To the allotment to find five or six people working away.  Someone told me that someone in a red car had come into the allotments, wandered around taking snapshots, and disappeared.  A little later on I discovered who it was.  A very irate man rang up saying that we were having bonfires, the third in his experience, his wife’s washing was out, we were going against the local council six o’clock rule, and you can be fined for up to 5000 pounds and he was getting fed up with the whole thing. Funny, I got that from his tone.

Clearly, he was upset but there is a golden rule here.  Before you fire bullets make sure you are firing at the right person and do give the benefit of the doubt.  His tone of voice on the answering machine message gave me no incentive to call him back so I will leave it for a bit.  In fact, the smoke comes from an adjacent garden over which we have no control.  The atmosphere on the allotment was lovely, the sun was shining, and I have a lot of good chats with people.  Tomorrow, we need to plant some potatoes.

I hope Boris Johnson doesn’t wait until people get immunity certificates before allowing people out of their houses otherwise will be sitting here all year.  They don’t have a testing capacity anyway.

My very good friend Andrew sent me a newly published book  called “a burst of conscious light”.  It includes discussion of Near Death Experiences, the Shroud of Turin, and the limitless potential of humanity. No one can accuse him of not taking on a broad remit.

Today, we installed an earthing sheet on our bed which is supposed to be good for sleep and for health.  The king-size was about 150 pounds but if it does the job I shan’t complain.  What price health?

I heard from my son Mark that he’s going to have to suffer a pay cut because of the number of children not wanting education or rather their parents not being able to be there in Thailand.  This Corona thing is affecting everyone.

The birds are singing their hearts out as I type. The sun is setting as the sun normally does in the evenings. Sometimes I state the blindingly obvious but never mind I will get over it I suppose.