I went to my favourite eating establishment, Hartley’s Kitchen‘  which is in the middle of nowhere but surprisingly busy. Paul, the owner, takes great delight in serving the public and as a result has a local following second to none.  As we arrived, he was off to do a delivery to someone who could not come to the restaurant. You may ask, in these days of lockdown, how the restaurant is open. The answer is that he is using the allowed takeaway  facility, closing the restaurant itself but allowing people to take food away or as in our case sitting outside and eating. We had the best fish and chips I’ve had for a long time, good quality fish and thin batter. I had bread pudding with orange and custard and Francoise had a roulade. 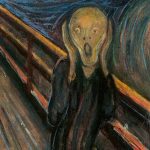 I don’t think we should underestimate the damage caused by this dreadful propaganda that everyone is infectious and should keep 2 m away from each other.. As I said before, the virus has come and gone and we are seeing a residual effect in a few corners. The way people are behaving you’d think we all had the bubonic plague. I notice that people are more nervous now about speaking, making eye contact, that when I walk along they get out of the way in exaggerated fashion. I think fear is something you can almost smell. I try to tell people that the worst was over and that herd immunity had taken hold of the vast majority but I might as well have saved my breath.

One of the waitresses at Paul’s is from South Africa; she had the most strange accent which I would not have identified as South African. This time I queried further and she said she was from Bloemfontein which is somewhat of the West of Lesotho. I asked when she had last gone back and she said last autumn and she had hoped to go to her mother’s birthday in June but since that is not possible she wanted to go as soon as possible.

We went to a place called South Horrington which is about 2 miles north of Wells Cathedral in our quest for nice walking places and we were not disappointed.  The valley is to the West of the B3139.  Here follows another installment of my “discovering the country” series of walks which we are taking full advantage of to mitigate the dreadfulness of the mind rape that the government is doing at the moment.

To the minor injuries clinic in Paulton which to my surprise was closed. The very apologetic nurse said she did not know when it would open again. She was beside herself with fear.  Off to the high street to talk to a very understanding and trauma free assistant about some pressure in my right eye accompanied by some bloodshot blood vessels. Optrex have produced something called “bloodshot eye drops” which sounds about right so I got some sort of service. Admittedly 6 PM on a Friday afternoon is not the best time to seek help from the National Health Service.