Last evening we went to a lovely summer solstice celebration with two friends. We had a barbecue and lovely rice bread which I haven’t had before. A couple of bottles of champagne can lighten the mood quite significantly. The host of the event proposed that we say something nice about other people in terms of our observations. She said that it was quite difficult to listen to positive stuff. I have some nice things said about me most of which I promptly forgot but it’s nice to know that I’m understood by someone.

The only problem was a persistent wind which eventually got to me and made me cold and we, having arrived at 6 PM left at 11 PM with the fire still going strong. I would have stayed longer on a warmer evening.

Today, up at about 8:30 in the morning and we decided to go to the Cheddar car boot sale about which I have written quite frequently. The weather was changeable so we were not sure a whether it was on and how many people would attend but as it happens the meeting did take place and there were I would say about half the number of stalls. They were placed much further apart to try and accommodate the crazy rules of everyone being 2 m apart. I watched a very good video yesterday showing that the virus is not a jumping bean and cannot go through dry air but needs a host to piggy-back on  for example water vapour and then it has to find its way towards an immune compromised person. All vanishingly unlikely. I did not notice many people avoiding each other. What a relief.

They had a half-hearted system in operation, to satisfy the rules and regulations, but in practice everyone was wandering around this way and that. They had made a bigger distance between the stalls. The public toilets were open. The restaurant was working on a one in one out basis but actually the whole thing was working quite well. The smaller crowds could have been due to 2 factors; the indifferent weather and possibly the fear of crowds.

On my return from the newsagents I notice someone was selling a collapsible bike actually two bikes so thinking that Françoise might be interested in having a bike which we could typically put in the back of the car and go cycling at our destination point. I invited her to view it and we ended up buying the model with gears. It was only £40. The person who was selling it had bought battery-assisted bikes so there was no need for them any more and evidently they have only done 10 miles since new when the bikes  were put in the back of the mobile home and left there. 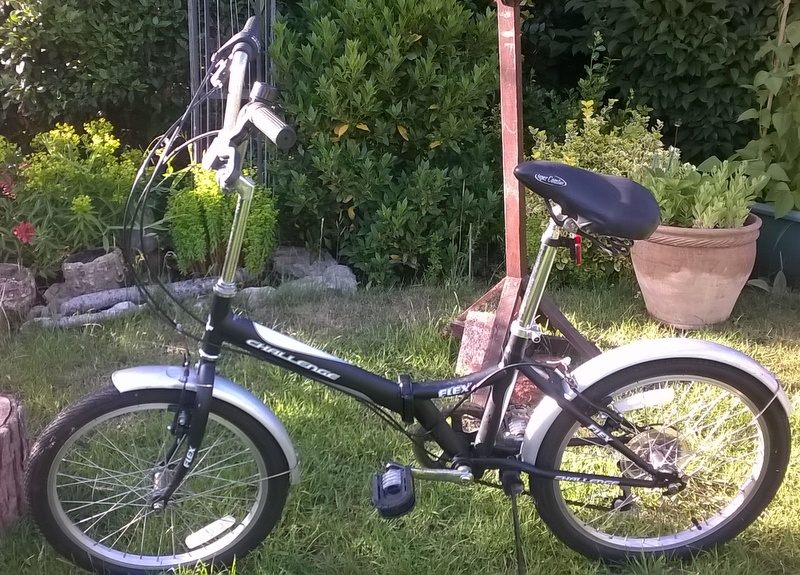