Today, a trip to Bath for my bi-monthly eye appointment.  Since wearing a mask on public transport is mandatory I have had to wear one. The drivers showed not the slightest interest in whether I had one or not so maybe I could have got on the bus anyway without being challenged but it was a risk I could not take because my eye appointment is valuable to me and my sight.

On to the bus without difficulty. Little did I know that I was going to find a graveyard of establishments that were not opening again. The Prince of Wales is a pub on the road to Bath slightly north of Peasedown.  There is no question that the closure of this pub is not temporary. They have closed for good. 11 weeks without a customer was just too much. 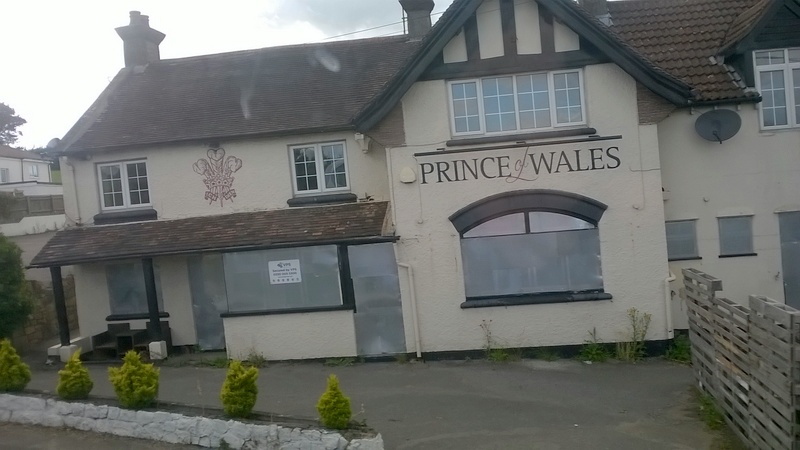 I arrived at Bath bus terminus about 1 PM. I was keen to see the effect of the recent loosening of rules.  The queue to get in the Bradford and Bingley building society must have been about 25 yards long with 2 m squares carefully marked out on the pavement. I did not see that many crowds in pubs. 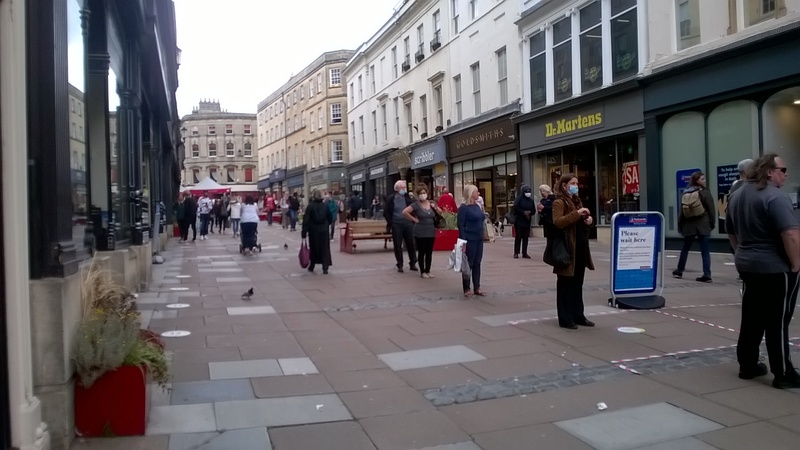 Gardens in the middle were as immaculate as ever, people just walked in without any need to pay as can happen during some holiday periods. 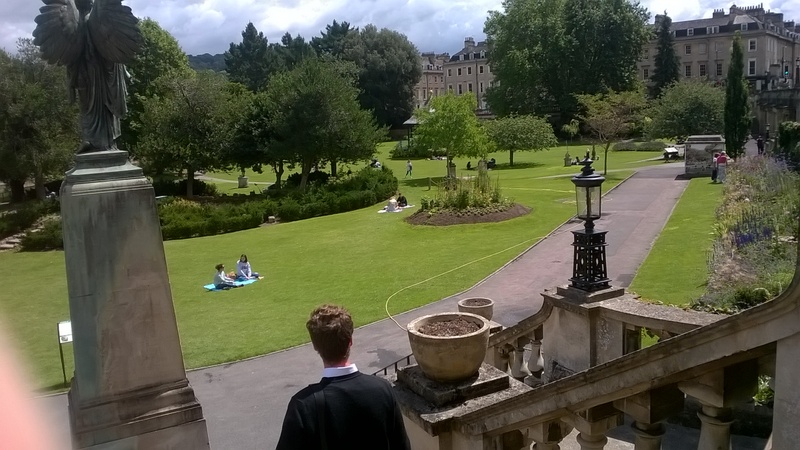 No one was wearing masks. I commented about that to the chap on the right of this picture but he did not say anything and merely nodded. On the other hand, a young girl with a child and a very funny – to me anyway – was wearing a Tshirt saying ‘Positivity please’.  I engaged with her about this and she said she wanted an antidote to the misery and negativity. Well done you. 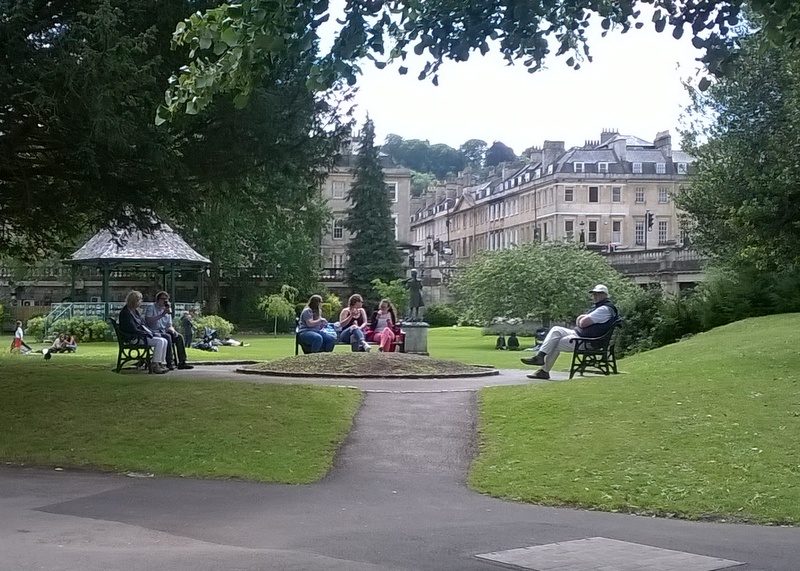 The bronze  of Mozart was interesting. I had not noticed that birds were a part of the sculpture. 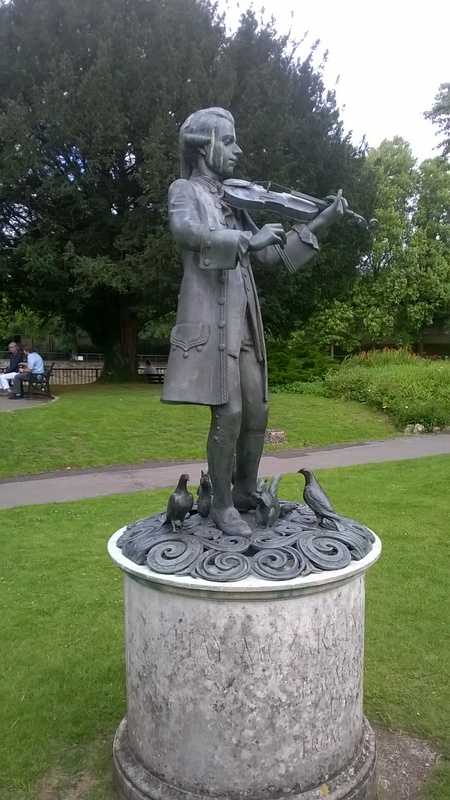 I was surprised by what was obviously a registrar office wedding. There were only a few in the party and the bridegroom looked very young but they seemed to be having a good time in their own way. 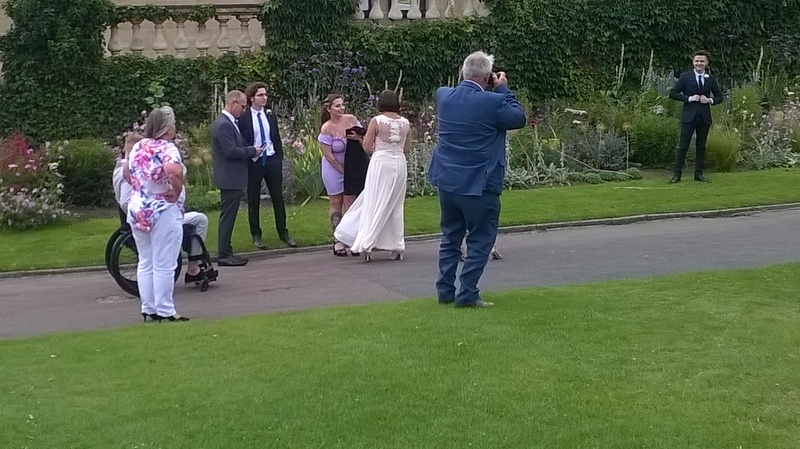 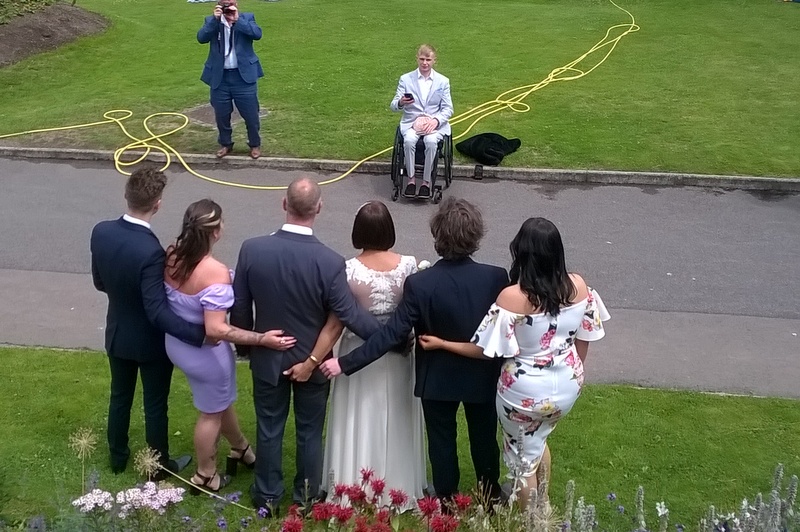 Onto an indoor market for perhaps a cup of coffee but although the coffee bar was open, the coffee machine itself was broken. The lady offered me a beer instead but I thought it was a trifle early in the day for that. 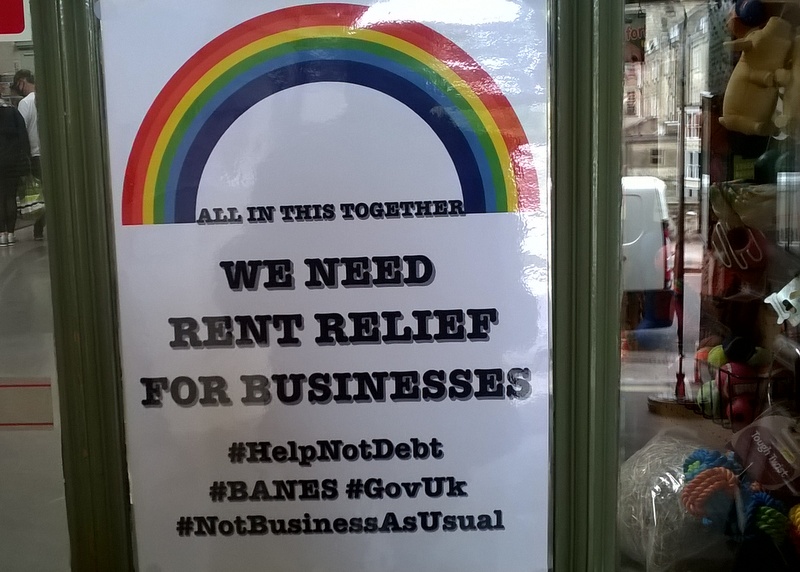 I saw too many of these signs for my liking, examples enclosed. 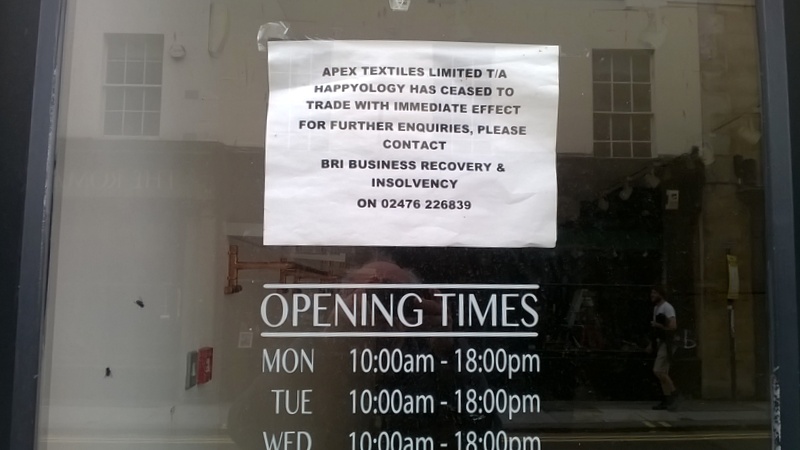 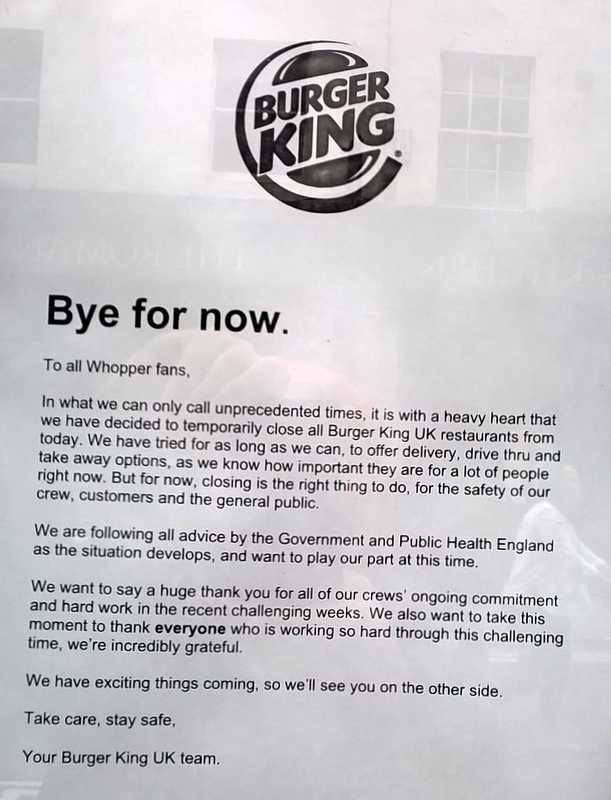 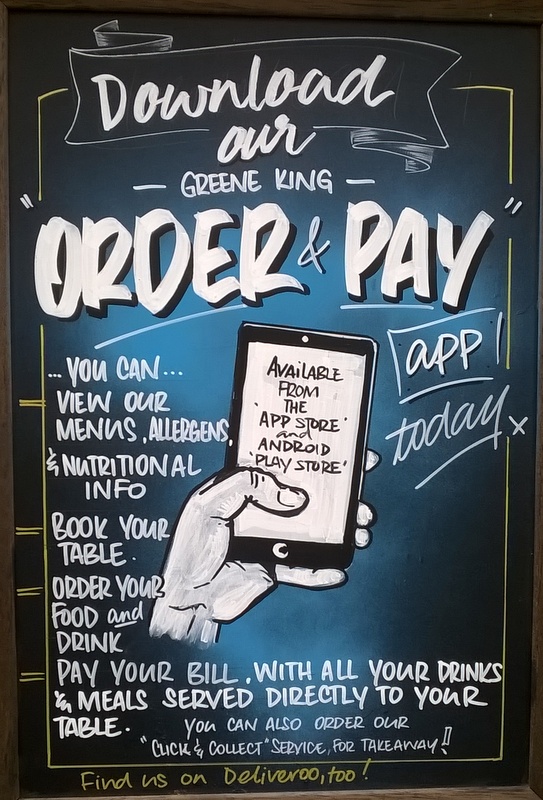 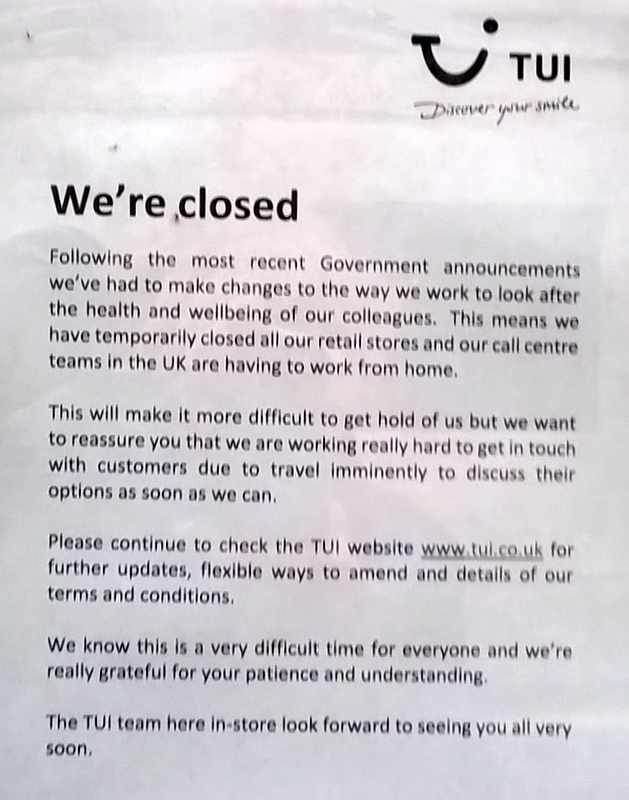 The markets were going (fairly) strong as ever, with an enhanced choice of vegetables and fruit that we are not used to obtaining  in Midsomer Norton. 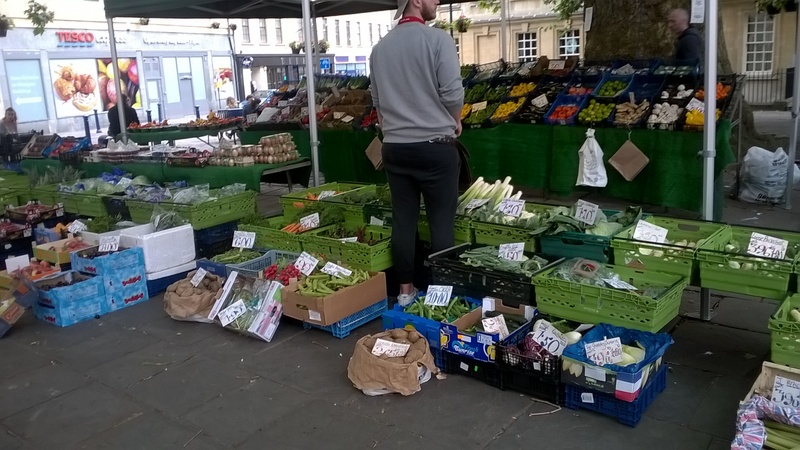 To Wetherspoons who had written a superbly worded  notice at the door covering everything. The extra plastic protection was not intrusive and I am sure I would have had a good drink experience had I chosen to stay. 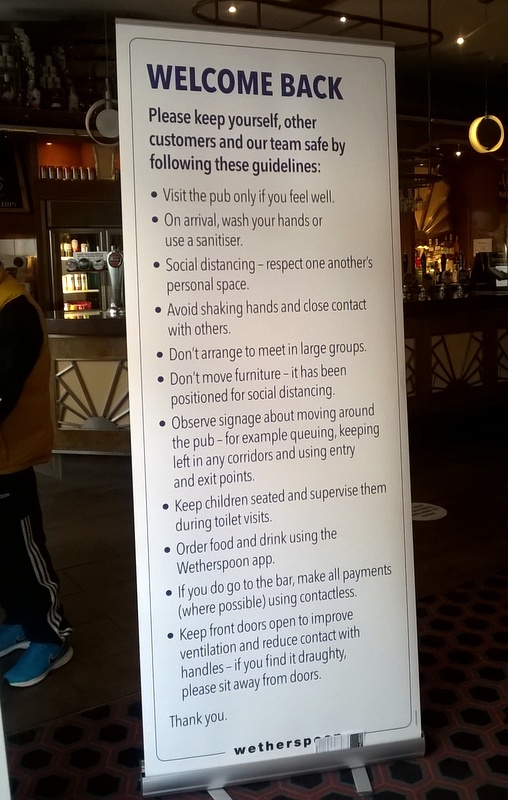 On the way to the hospital I saw this very depressing sign. Although there is absolutely no evidence that we need to avoid each other permanently, the roads are already being designed for this. 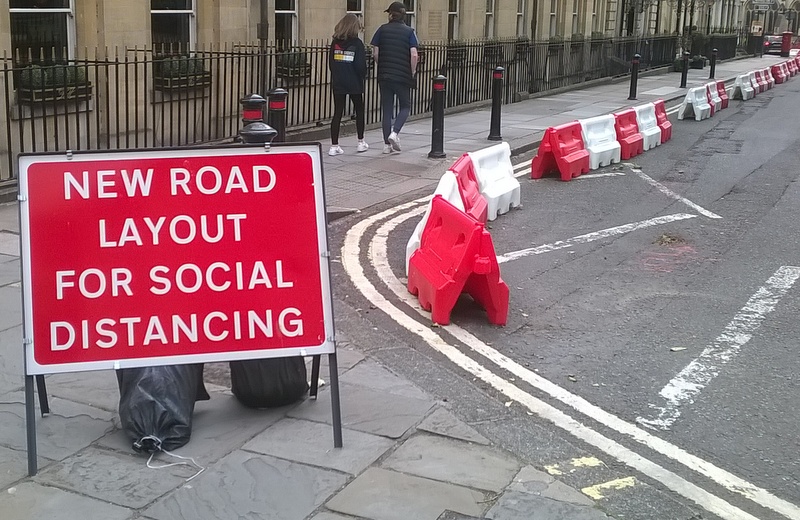 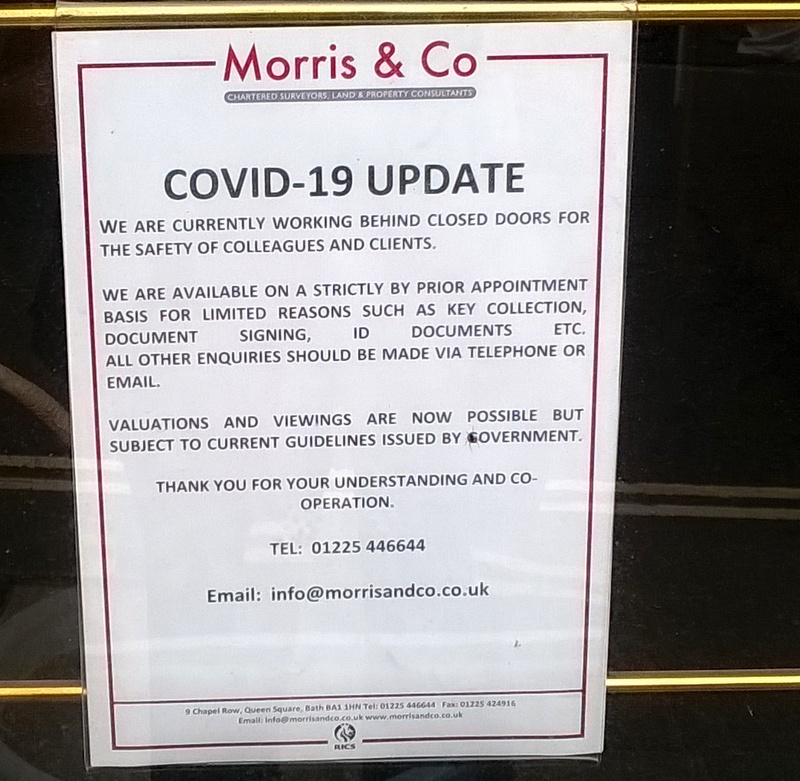 To the R.U.H.    I had heard that people were not visiting the accident and emergency hospitals I went along to have a sneaky look and a photograph. there were a few people sitting around with every third seat marked as being unsuitable in. There were six people in there altogether. Maybe the others are frightened to come. 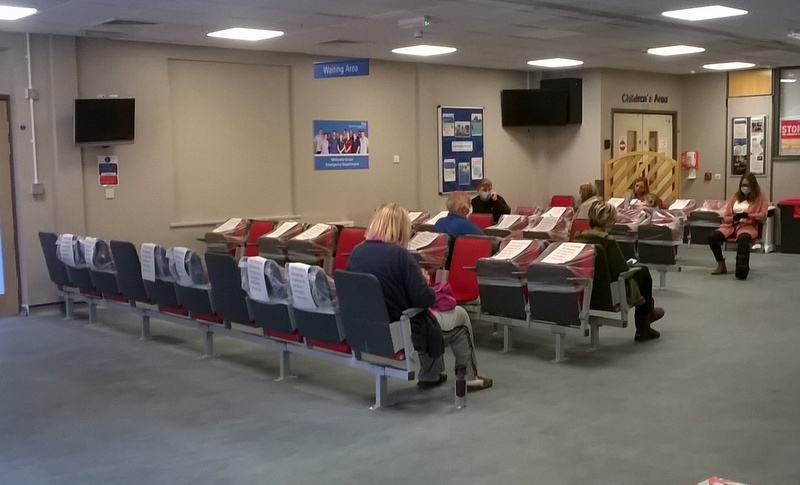 I saw a feature that I had not seen before outside the new cancer unit which is a free pressure pump for bicycle tyres. Well done someone using your imagination. 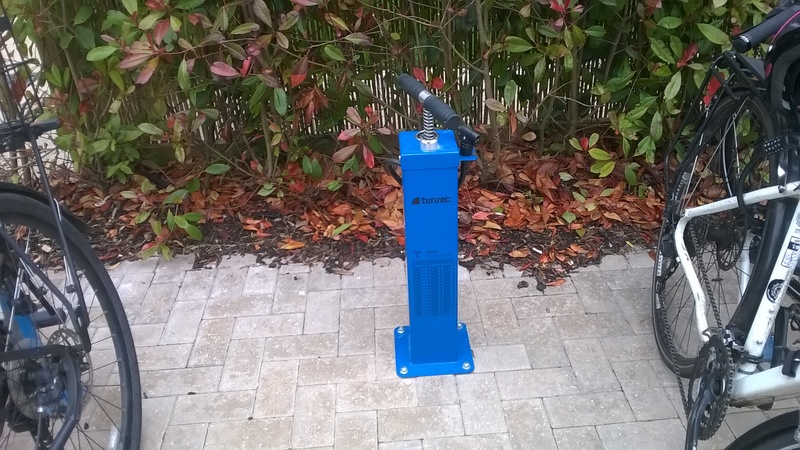 The central restaurant downstairs was deserted so I bought myself a Latte and surveyed the world as I was early for my appointment. 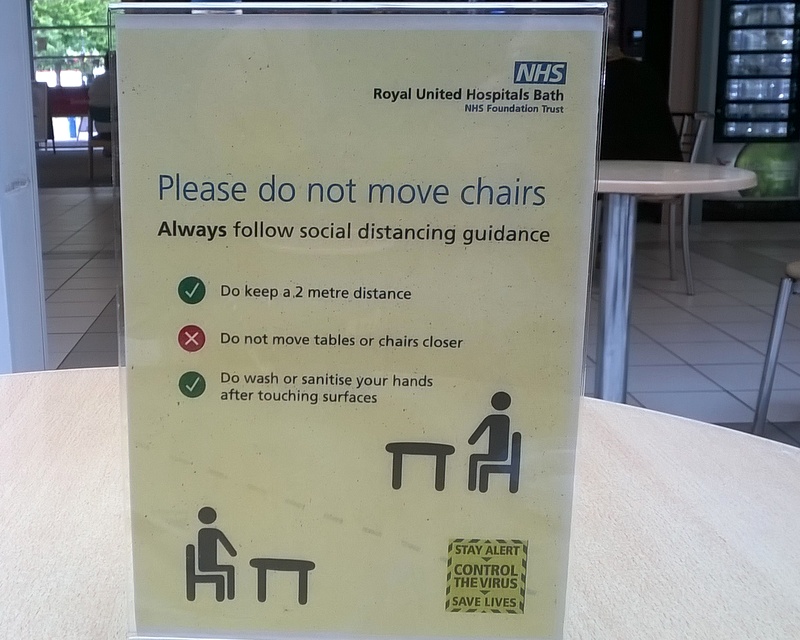 At the hospital entrance everyone had to wear a face mask and keep it on until they leave. I dutifully put one on and found that after a minute or so I could hardly breathe. How on earth people put up with this all day I do not know. I went along to my appointment and had to ring a bell to get in. I had to stand back while the nurse asked me questions about contact with COVID. I was then told I had to walk along a one-way system towards a section of the ward marked ‘injections’. Whilst in the waiting area I over-heard that there were six appointments for injections this afternoon but only three people bothered to turn up. Considering the high cost of the staff who give the injections this is a considerable loss to the National Health. Mind you, this is nothing to the loss in the country which must be billions today due to this deliberate manipulation of our minds on the grounds of “keeping us healthy” when the source disappeared about 12 weeks ago. Keep the fear going, boys, keep the fear going.

Tests confirmed that my eyes were not as good as last time which considering that four months had passed since an eye examination did not surprise me so the injection was timely. Back on the bus, when I noticed that at all bus stops there were no timetables just the theme of ‘keeping our buses safe’.

Arrived home with some relief, having obtained a bottle of white wine along the way. A perfect sunny evening. Overall, a good day but I could not cope with wearing a mask on a daily basis.