I’m always glad to be of service to people and when I go out and about I’m always on the lookout for people who might need cheering up.

First of all, I went to the Green Shop which is where we get all our health foods. Thank goodness it has survived the lockdown. They have rearranged everything and removed the cafe, which wasn’t making any money anyway, that’s given more room for stock. It is much less crowded than it was more pleasant to look around. I asked what they would do when the masks became compulsory inside shops and they said they were not particularly bothered who was wearing a mask and who was not.

I understand that each shop can decide their own policy about letting people in without masks so this whole thing will vary from establishment to establishment.

I next went to the Post Office to see that those behind-the-scenes were all wearing masks it must be very uncomfortable; I remember reading that shopworkers did not have to wear masks so why are they wearing them. I wasn’t going to get into discussions so I just did my business and left.

After that, I visited an animal charity shop and had a chat with the woman behind the counter who was wearing a mask. I was wearing my lanyard with the message about being exempt from having to wear a mask on a bus. It turned out that she was going to separate from her partner of 15 years and he could no longer bring her to work so she would have to get to work on her own by bus. She had asthma so was very anxious about the effect having a mask would have on her. I was able to tell her that with the notice, you just get on the bus without any problem. She was very cheered up this and asked where I could get hold of such a notice. I know that we have a spare one at home so we went back and brought it to her. She was duly grateful and I was glad of the opportunity to help a woman with breathing difficulties.

I spoke to my doctor about this whole problem. I wasn’t quite sure what to believe. He has to wear a mask all day when talking to people but claimed not to have suffered any breathing problems. I queried that the expelling of carbon dioxide could not happen properly but he seemed to brush this aside saying that he had heard of this sort of thing before. I told him that the bus drivers would let me on and he replied that if people are understanding then let it be but he could give me no certificate of a particular disease which would give me official exemption from the role that is coming next Friday. 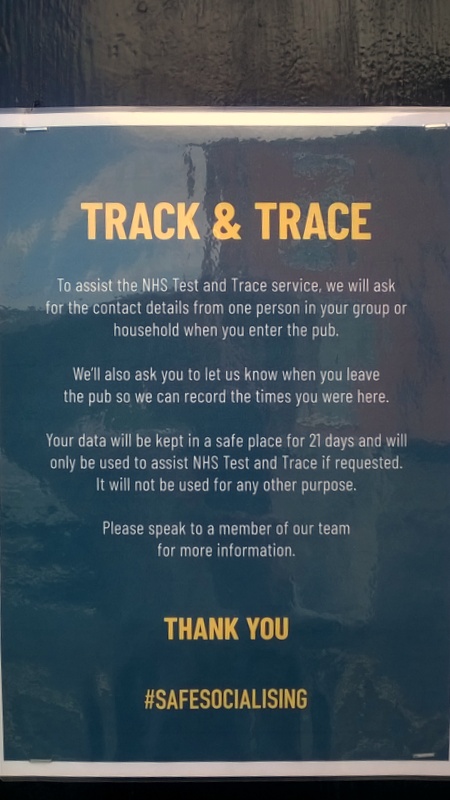 This trace and Track plan seems to take the form of visitors to a public being given a chance to write their name address and phone number. I can’t see that establishments can spare the staff to check everything and I think it will naturally die away as so many of the government’s threats have done.Wetherspoons are not doing it.

It is a lovely sunny day and what a pity I have to report such things.

Today I have created a new website, Mask-COVID.info where I will place all the references about masks. It is now time to get down to actually doing something, talking to people etc.

I have found a car advertised at £350 which needs some work doing, surprise surprise, but it is local and if it’s got my name on it I will have it. The purchaser in the queue before me is supposed to turn up on Sunday said if he doesn’t, I will be offered it. It is near Shepton Mallet so only about 25 minutes away from where I am in Midsomer. For some reason I stopped worrying about the car so maybe this is the car for me.