Today morning with some clouds scudding across a wonderful blue sky we find ourselves doing weeding in the garden for the lady that we look after.  She lives in Timsbury, is about 90 years of age,deaf as a post, but a lovely personality, an innocent soul who is these days unless a dying breed – no pun intended.

We had literally hundreds of chickweeds to remove and due to the recent rain it was very easy to pick them. I get a certain satisfaction in clearing ground which is a good thing because the job by any standards could be seen as quite boring. I had a chat with the man next door who was jet washing some bricks he had bought to make a path. He asked me if I did such things and I said no, that is a skilled art and in a small area, mistakes are unforgiving. I said if you wanted to get someone in it is better to clear the ground and do as much as he could himself in order to gain the chance of a good price. In other words, make the job hopeful for someone and they will probably do it in half the time that it would take if the ground was unkempt.

During the morning I went to the local branch of the Co-op. Everyone was wearing masks except me. I went and got myself to a coffee from the machine and then a sandwich. Whilst I was doing so, a local man came in and swore to himself that you needed a mask. I told him to coming anyway and just say that he was exempt. He did in fact come back, picked up some crisps and a sandwich and presented himself at the till. No one said anything. I followed him and no one said anything to me. I did not even have to show my sign.   I think this mask idea is already fading though I do keep my eye on the papers to see what’s going on.

The government has scored another spectacular own goal by declaring that people from Spain need a 14 day quarantine period which means that they cannot go to work. The Spanish prime minister complained that the new restrictions imposed hats such short notice were unjust and that is putting it mildly. How long are people going to stumble on trying to run this government without a rebellion? I think people are rebelling but quietly but sooner or later this is going to boil over which is why I do not see that the second wave which was prophesied, strangely, back in April, will happen. Too many things do not make sense which is hardly surprising since Bill Gates is pulling the strings and telling people what to do.

My plans for picking the car up are entering their final stages. I have had to hire a car to go to Bournemouth because our current car does not have an MOT and although I risk it for local journeys, longer journeys are just taking too much risk. On Friday, I will take my old car to be disposed of and hopefully the new car will be in my possession then. It will have a three month warranty which does give me some confidence. the whole matter of transport has been preoccupying me since late March when I bought the ill-fated turbo car a couple of days before the lockdown happened. What likens the burden somewhat is that the person who sold it to me I believe sold it in good faith. You cannot tell when a gasket is about to go and it showed absolutely no signs of any problem for the first 50 miles or so.

I was very interested to listen to Lady Colin Campbell talking about her book ‘Megan and Harry: The Real Story’ on Talk Radio here in the UK. 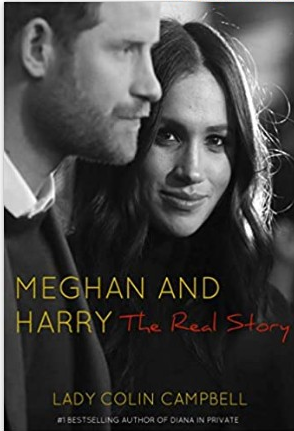 I have always thought there is something rather devilish about the look in Megan’s eyes. They look more calculating them loving and I’m afraid that Harry is far too weak for her. Lady Colin says that however much she is given in terms of attention and possessions, she always wants more. The poor old Queen and indeed Prince Charles has a lot to put up with without this going on. I’m sure this book will be a difficult read but I think they have deserved it for their behaviour, running off to live in Canada complaining when they get the wrong sort of attention seems to be a little bit hypocritical and that is putting it mildly.

We just had another letter from our local quiltery from the owner saying how few people are coming now to view although the shop is open. It is not surprising. He has asked people to line up in their cars outside, coming one at a time, pre-order if possible, not to touch the items, not to have tea and coffee which will be served to them …  in other words where is the fun? It frightens me to see people swallow this total hoax hook line and sinker. These people should be given a talk on the human immune system and how without this system we would all be dead.