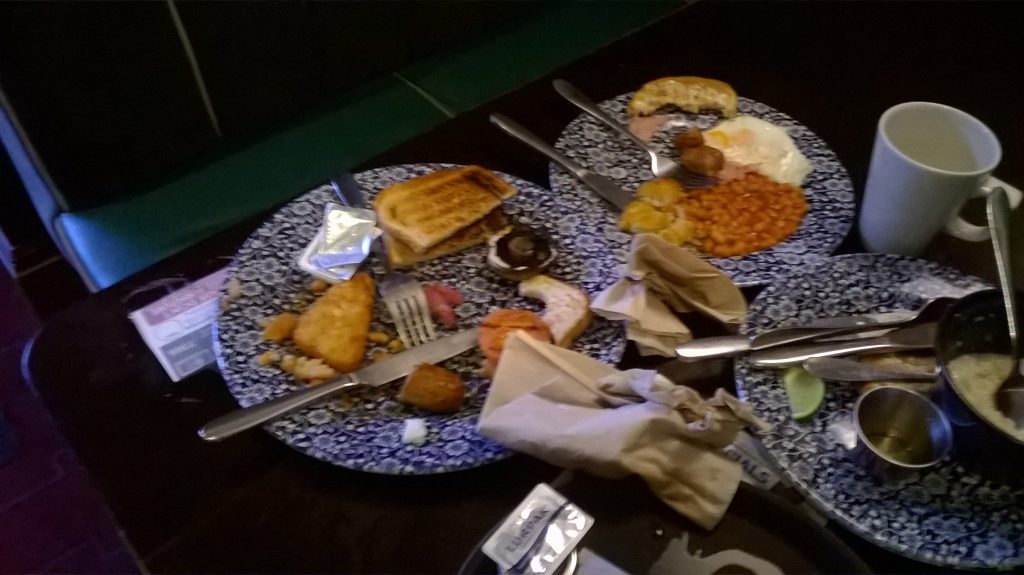 So I got up this morning and went to Wetherspoon’s for breakfast. I arrived about 8:30 AM and ordered my meal which was a traditional breakfast with coffee. To my surprise I was only charged £2.75 and I forgot that from Monday to Wednesday for some perverse reason the government is picking up the tab for half the food provided that it is below £10 ahead. I think that is to feed us crumbs of hope, the feeling that we are loved, as opposed to the dark things that are going on behind-the-scenes.

In the next stall was a young mother attempting to look after a noisy young child together with others who had left before my arrival. The mother left shortly before I did. On the way out I wondered why they ordered a traditional breakfast when in fact they hardly ate anything one person has had the bacon, half a sausage, and an egg and someone else has barely touched their plate. When I was young, my mother used to say to me “think of the starving Africans” as an incentive to finish with a clean plate. They say that people born during or after the war always clean their plates obsessively and I have largely inherited this habit. The fact of the matter is I can’t bear wasted food. If you were not hungry why order the food in the first place.

Today was hot, about 30°, and I spent much of the time populating my websites and watching videos. One of them was by Dr Andrew Wakefield talking about the damage that vaccines can cause and inviting us to watch a film which a rental charge is paid. I have put it in my relevant website if you are interested.

I visited a couple of new people might be gardening prospects. One of them has an infection of Mares Tails and surprisingly enough one way of getting rid of them is WD – 40. Another way is using Weedol.  The other person did not quite know what she wanted, was asking for tree pruning at the wrong time of year, and was ambivalent about how much she wanted to pay so I gave her what I thought was a reasonable quote by text and we will see what happens. Most of the people in Timsbury are very reasonable and do enjoy working there.

This evening, I was invited to take part in one of the ZOOM chat groups run by my local church. The vicar was slightly surprised to see me and when I said that he had invited me tonight he realised that he had sent invitations to everyone for the Tuesday as opposed to spreading them out between three nights, Tuesday Wednesday Thursday.

We started with some small talk and then he introduced a biblical text. We were barely into the conversation when one of his children made a sound. He apologised and said he had to go and put a dummy in the mouth his child. Evidently, his wife could not baby site as she had to go out to deliver some clothes for a sleep-in and she had not returned. He came back to the meeting and we made an effort to start again and were just getting into things when his wife arrived, batting in with some irrelevant information about the fact that one of the children had run fast down the drive towards the nearby vet.

I was preparing myself to say something and this I found a really violent interruption; I just wondered if the wife had any respect at all for what was going on. At this moment I decided that the meeting was not for me and I switched off my video and audio. It remained switched off for the rest of the meeting. I’m just wondering whether it’s me or whether it is asking too much for someone to actually be with us in spirit,  in focus and without interruption, for an evening session lasting one hour especially as if we have no other opportunity during the week due to the ridiculous lockdown.

What kind of psychopathic mind would say that no singing must take place in the churches? The technocratic mind is not interested in religion.

Anyway, after that mini rant back to the subject. I don’t know what is in the mind of his wife to think you can just batting any time she likes without being seen on screen. I do need or should I say prefer to have fellowship with like-minded people but it looks to me as if this portal is not suitable. My wife thinks I should have a word with him but do I really have to go to the stage of explaining basic professionalism. Maybe other people like it the way it is that it does not fit with my style.

I’m sitting here writing at nine o’clock in the evening minus a shirt and still very hot and sweaty. I can’t imagine what it would be like in a country with 90% humidity every day and temperatures of say 35°C like it must be in Dubai. Anywhere overall, a good day.