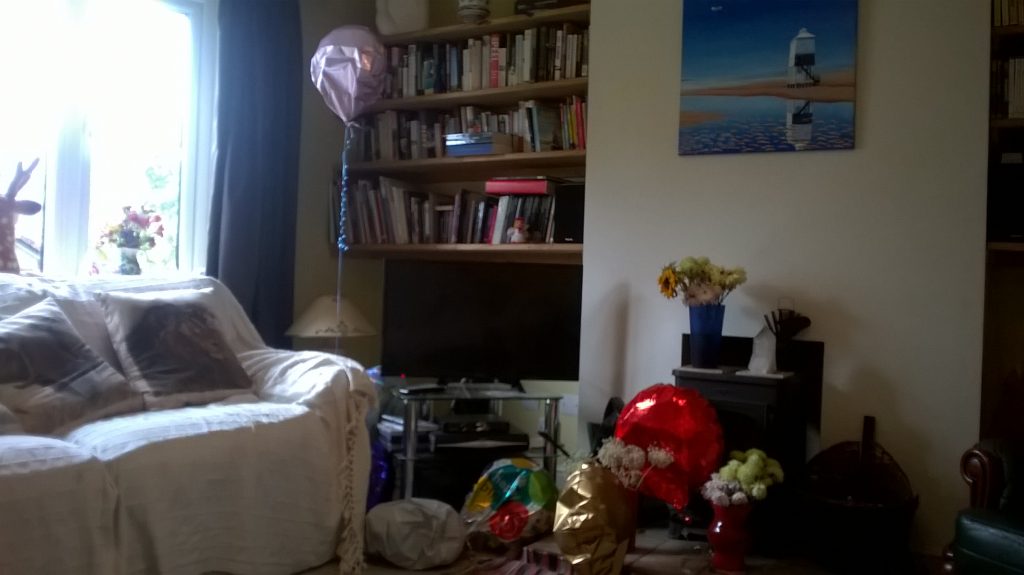 And the winner is….. the pink balloon!   20 days after the event and it is still flying high.

Today is the day before our miniature holiday if you can call it that. I reckon that people need holidays from ‘holidays’ spent abroad. It is of course the onerous travel restrictions and requirements, particularly when flying outside the country,  that would take the fizz off the champagne.

We in UK Seem to suffer from ‘lack of summer’. A couple of weeks ago we had boiling sunshine and record-breaking temperatures but in the past few days, rain and wind has been the order of the day.  It was a good thing that we did our routine weeding job in Timsbury Monday instead of Tuesday. At least we have enough in the bank to treat ourselves to the necessaries of petrol, accommodation etc.

Anxiety takes many forms.  I just received a call from a lady who wanted maintenance on her hedges reduced. The strange thing was that she had not even moved to the area (Timsbury as she plans) from St Albans which is about 120 miles away. She would not or could not tell me where she was going to live so I asked her to call me when she was settled in.

I’m involved in many mail outs and subscription lists. One of which is called “nomadic Matt” where some young enthusiastic American guy goes around the country writing about his travels. He has recently become bored by doing this because so many places are closed and people are so inhibited, brainwashed, by talking to strangers. He used the phrase “I know the U.S. is a bit of an outlier in terms of how it is handling COVID“.  The word ‘outlier’ jumped out at me as a completely meaningless and horribly constructed and spelt word. It sounds like a gentleman’s outfitters gone wrong. I can’t even get my tongue around the word. Is it a liar who’s been outed?

The rather stodgy definition is

outlier (n.)
c. 1600, “stone quarried and removed but left unused,” from out- + agent noun from lie (v.2). Transferred meaning “outsider” (in reference to persons) is recorded from 1680s, especially “one who does not reside in the place of his office or duties;” the sense of “anything detached from its main body” is from 1849; the geological sense is from 1833.

I am a fan of words but I cannot think of any context in which I would use it. The word “outsider” is surely far easier to understand and remember and would be more understood by the average person. I think that this word outlier has had its day. In all my years of listening to the media I have never heard it used. I’m not saying it won’t come back into fashion as far as I’m concerned, as they say on Dragons Den, “I am out”

I went to Wetherspoon’s for breakfast today to celebrate the last half price offer which ends at the end of this month. I described it as a sop to the public but were all having to pay for this as we are for the £600 million-£800 million for a vaccine for disease that has not yet been identified.

I noticed for the first time that there were no menus on the table. Since they change so frequently, and the management have to throw away the menu if it is used once, they must’ve been spending huge amounts of money on printing. When I spoke to a manager, she said that I would either have to use the app or go to the bar where there are a few menus placed. This seems to me to be another step towards a cashless society which is slowly but surely creeping up on us like the tide.

The behavioural psychologists who run the world in general and the UK in particular are very clever at introducing things and changing the rules by stealth. Eventually, it won’t be credit cards or pay by phone; it will be implanted  microchips or worse still nano technology within us or face recognition. That is the wet dream of the technocrats. Watch the trends in China and Australia.

It is a beautiful sunny day after the tempest of earlier this week so it makes me look forward to the trip a little bit more. I tend not to ‘look forward’ more than I have to because expectations can be different to reality but we have not had a break now since the beginning of the year. Our planned vacation in April fell through because it was in Spain (I am still fighting to get a refund)  and so this will be our first time away from home. However there are others far worse off. I’m thinking of the people who are housebound or cannot get out and whose friends cannot get to them. That’s loneliness with a big L. I also sympathise with children who have to wear masks because their ill informed parents think that their children are at risk of getting the disease though there are zero cases in the UK anyway.

It will be quite nice to get away from all this for a few days then knowing me, I will probably keep an eye open for latest developments.