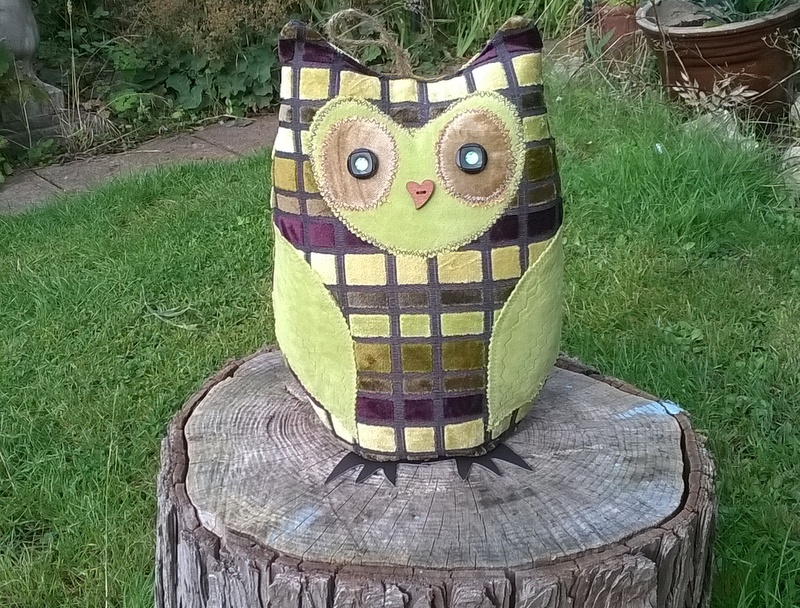 Francoise bought me a present of an owl that I named Oscar on my recent vacation. We found it as a very unpretentious market in front of the library in Much Wenlock. First of all I was attracted to the woman who made it who seemed to put her whole heart and soul into these objects and also in various items of clothing. I found that the owl radiated something. It was certainly unique and personal. She charged the grand sum of twelve pounds which I thought was good value bearing in mind that it was also an artwork.  Oscar will join George who is a hedgehog who looks after our house and also our deer, stuffed admittedly, who keeps watch out for intruders.

Gardening jobs are rare these days not because nature has gone on strike but because people are frightened of any contact and have really changed their habits. It was a great pleasure to do the gardening job today for an elderly couple, one was 91 years of age and the other was 89. The wife had lived in the same house on Waldergrave terrace, Radstock,  since she was born. We were treated to a talk on local history, particularly which collieries existed in the area. It was interesting that the couple were both very bright and I think their sense of humour and companionship kept their brains going. our daughter said that “she had all her buttons”. I remember being slightly amused that this was we say “she had all her marbles”

The garden was basically a sloping field which had once been tended but was now consisting of grass. Perhaps a better description would be a meadow. It was about 50 m in length and on a 25° slope I estimate. You only notice the weight of a mower when you have to push it uphill so if you need to estimate the cost in energy and time mowing on a hill take your figures are multiply by two.

The garden was very much a memorial place because in the old days they had a small orchard, and Lorna, and that’s where vegetables grew so we had full respect for this. It took us 3 1/2 hours to mow and weed. When I work for people who appreciate what I do I get invigorated but I have to say on this occasion the combination of the sun and pushing a heavy object uphill did exhaust me so I had to pause from time to time for a rest. At 76 years of age I am entitled to take things a bit easy though I was positively junior compared with my customers.