So we decided on a whim to go to lunch at Hartley’s Kitchen for some fish and chips. Now these are not your average product. They are not cooked in fat but I guess butter. The batter is very thin and edible. The mushy peas were home made with fresh onion; the horseradish sauce was also freshly made as were the chips.  Result – a meal that goes down well. No after effects. As the restaurant was only open for takeaways we decided to eat it in the car. A little cramped but who cares. At least we were out of the rain showers.

Prior to this we went to the green grocer come wine shop. The greetings now seems to be ‘have you had your injection yet?’ We of course will never have it but some think that it will benefit them. See elsewhere for my fruity comments about this.

Afterwards a trip to adjacent bakery run by an Israeli chap called Az.  His food is expensive 2.50-3.50 per slice but home made and delicious with no chemicals. How he could afford to take the whole of January off beats me. He cannot be making any money from his new venture yet.

This afternoon, a visit for tea from a friend who deals with patient flow at an adjacent hospital. She refuses to get ‘the jab’ and is about the only one to resists. She thinks that she will eventually be forced to do so on pain of losing her job. We thought she should apply for another position with less patient contact elsewhere in the hospital.

We decided that we would like to meet more lively people in the area who are not afraid of discussing matters of common interested.  We will start a Facebook group and then announce to the other groups that there is a new kid on the block.  We might get 6-12 people. That would have to be on ZOOM in the first instance until the restriction on numbers is lifted. Covid is so clever that it does not bother to visit groups of six or less. It is also wind-sensitive so has learned not to travel more than six feet due to a special set of wings to slow its progress.

The only way of staying sane is to be well informed and active.

Some snow for later on next week. It will be deep on the ground in Northern Germany. (Venturesky.com is the best). Forecast for this coming Sunday at 1pm is shown below. 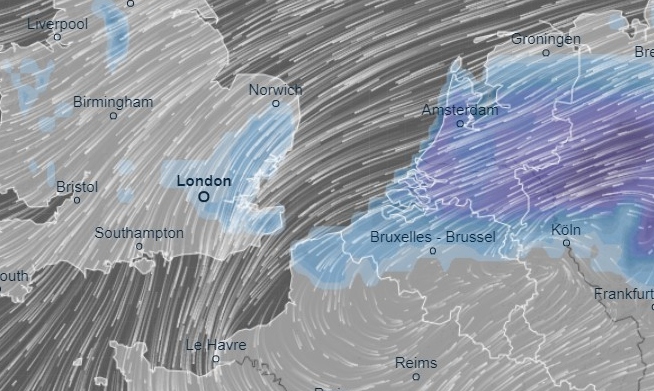 My stomach benefits from very little food in the evening, only small amounts of wine and no sugar. For the third day under the new regime, no bloating.