Saturday is a bigger spend day because we go out. Off to Midsomer Norton market. The bread person was not there due to a medical operation. We went to our fish stall. Deliveries of fish were very limited due to delays at the channel ports. Everyone except one or two were masked up – in the bright sunshine.  These are the people who believe anything they are told.

Back home to deposit our purchases then off to the city of Wells. What a lovely sunny day. I almost forgot what the sun was like. We could have done with sun glasses. We drove to the market to find – nothing but bare cobbles.  We asked around to be told that they could not find enough marshals.  What a weak excuse.  The market has gone on since 1136, when Bishop Robert granted a charter. Wells itself goes back to Roman times and has retained its charm and character.

We took a walk along the high street and noticed a number of shops closed. We wonder how many of them will re-open. 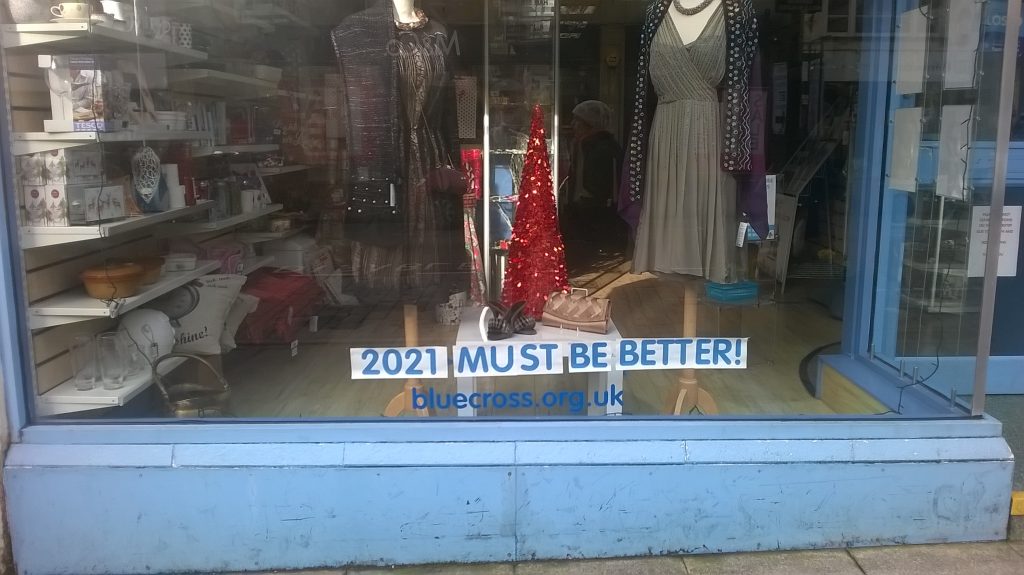 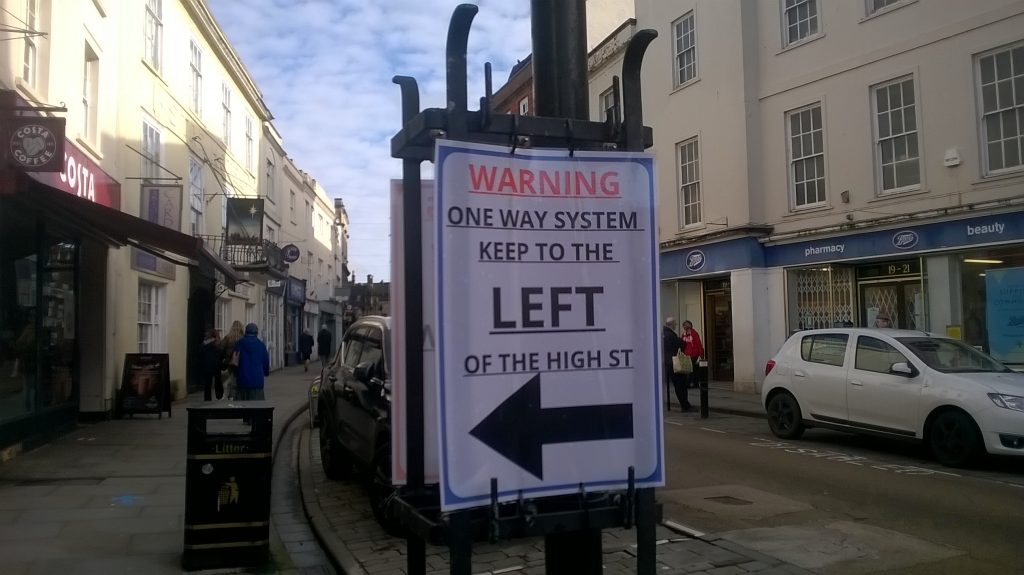 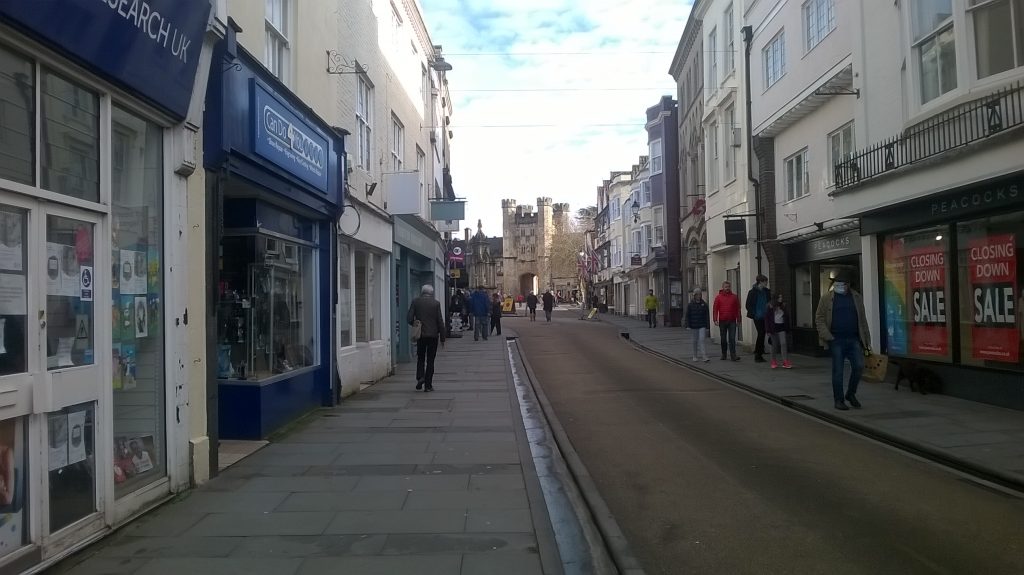 An almost empty high street.  I went into my favourite coffee shop to get a take-away coffee and pastry. The notice outside said that only 4 people should be in at the same time. There was one person in the shop and one man in front of me. I indicated that I wanted to go in and he refused saying that it was ‘polite’ to only have one person in. I did not bother to engage.

To the Bishops Palace and garden. There is a new arrangement where you can get an entry ticket for 15UKP which covers you for 12 months. Must better than the old 42UKP for two people. On the way we saw swans enjoying themselves in the warming sun. 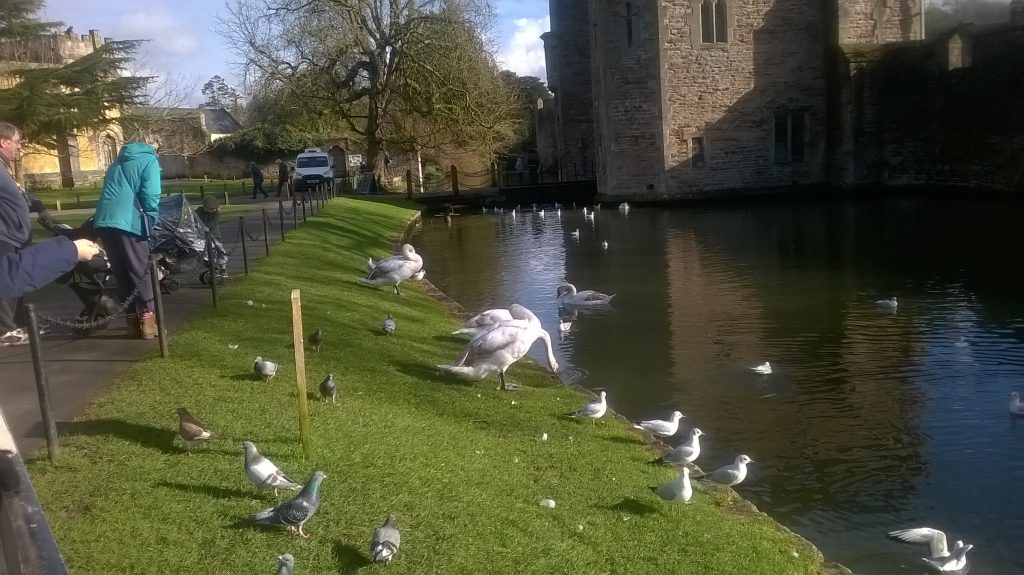 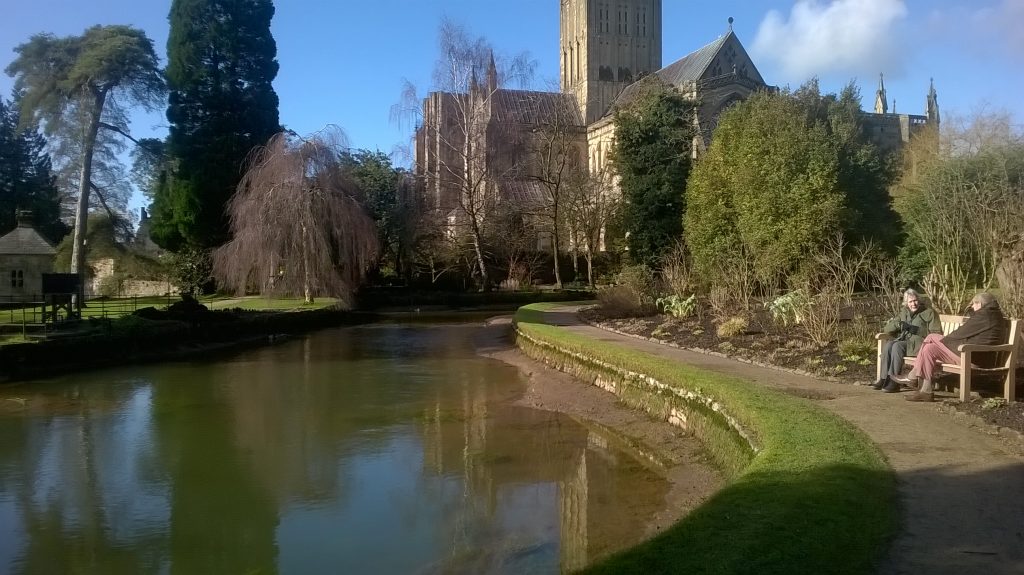 We met a lady who was celebrating her 50th birthday with her friend, complete with a glass of pink champagne. She was from Lancashire. Why do I get the Yorkshire and Lancashire accent mixed up ? We had a great sense of humour and we spent about 15 minutes chatting about nothing in particular. I said my only fame to Lancashire was having worked at Newton Le Willows and she said she lived 3 miles from there, describing it as an unremarkable place that she does not wish to return to.

We met a man with a camera with a huge telegraphic lens. We talked about many things – photography included – and he told me he was on Instagram and we could see his work. He told me about stockimo, the world’s largest web site for picture buyers. This site is bought to us by Alamy, ‘the world’s largest stock photo agency’ We discussed the day light pertaining that particular day and how when the sun is in the west, you get a back light on the flowers which gives clearer relief.

In the city itself we met a couple who had two dogs. These were rescue dogs bought from Romania and delivered -to your front door’.  One looked a bit like a wolf.

The chats we had are to me one of the main reasons for going to the gardens.  I told the lady on the way out how much I had enjoyed the visit, and was looking forward to the next one.  Few people had masks as opposed to the High Street where practically everyone had them on.

My friend reminded me of the healing value of music tuned to 432 Hz so I found some and played accordingly. We have to work twice as hard to maintain our sanity and listening to music is one of them. 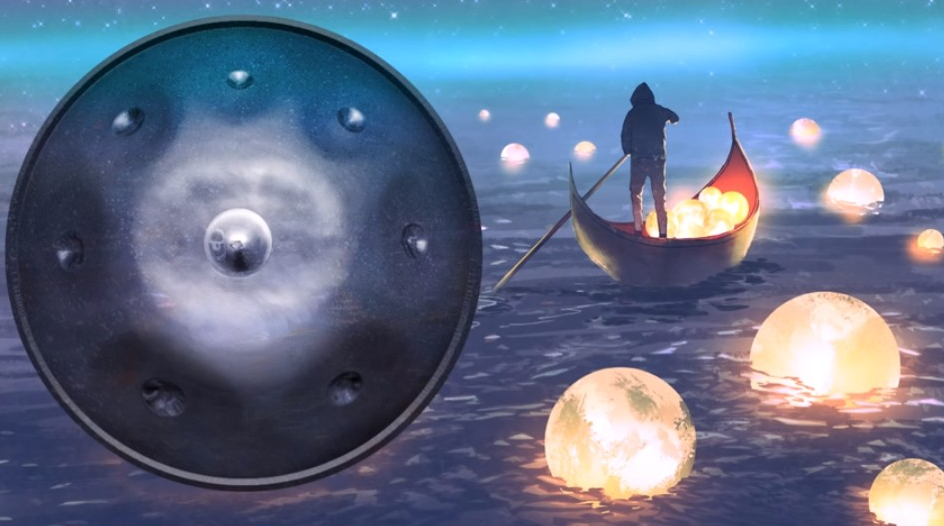 I spent an hour or so compiling a miscellany of photos of the allotment gardens which I sent to our allotment group here in Midsomer.

A cold cloudless night. Snow due Thursday but not much of anything before.