Last Saturday we went to Bournemouth for a Freedom rally and it was very interesting to note the sort of people that turned up and the reactions of the general public. Bournemouth is basically a dump at least in the centre where there are many chain shops such as SportsDirect surrounded by the odd artisan Cafe or any that have not been driven out of business recently.

The journey there was very pleasant, cross country with no motorways. We were served sandwiches by our lovely host who has worked for the Samaritans for 41 years and who supplies me with a good sprinkling of Covid related events everyday for which I’m very grateful. 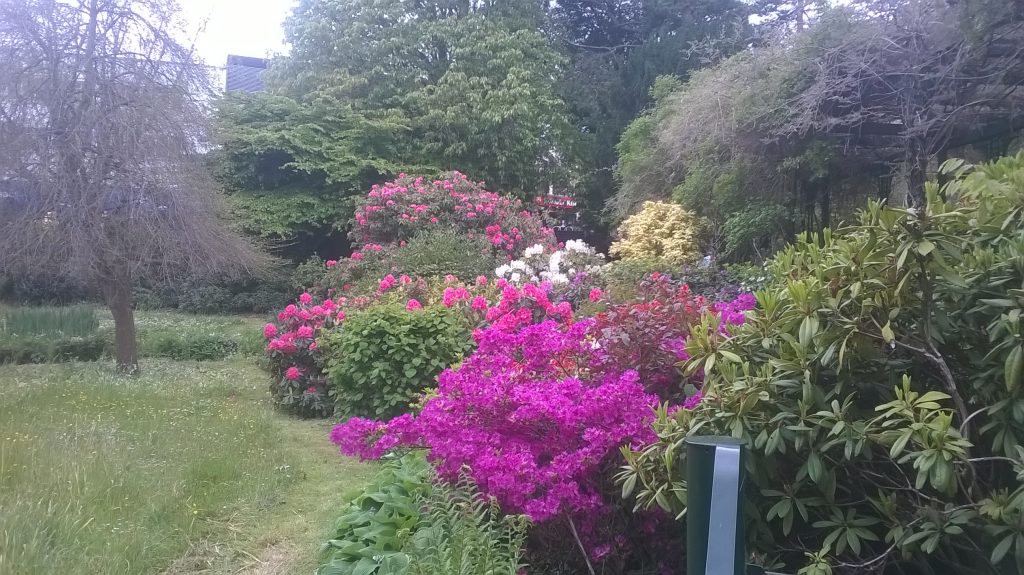 The above is part of the valley that divides Bournemouth into two parts. It is well maintained and a joy to run, walk or jog along.

I met a lovely lady on the march called Fern who made it her business to supply people with video tapes and leaflets. She has been doing this for the past 20 years and seems to be unemployed. When I asked her how she found the money to do this she just said that God supplies it. It does me good to meet such people and it restores my faith in human nature.

The march self was an informal affair with people waving placards but it was spoilt by a person with a loudspeaker who shouted so much that it was impossible to hear what he said. We went down to the seafront adjacent to the pier and at least we saw the sea. Between rain clouds we admired the perfect sands for which Bournemouth is noted. We decided not to go on  the pier. The entrance fee was 90 pence, the wind was blowing too hard for us to enjoy it.

They say that accidents happen in groups of 3. On Monday morning I was having my Cornflakes when when a filling just fell out. This left me with very few upper teeth and made it impossible for me to actually eat food. I phoned my dentist and luckily got a same day appointment at 5:30. He took an impression of my upper and lower jaw. He promised to try and make a replacement the same week as he is going on holiday next week.

My second disaster was that while cooking a cauliflower cheese on Tuesday, I pulled the very heavy dish out of the oven and it shattered into a number of pieces probably due to it’s great age and fell on the floor.  I cut myself quite deeply on the second finger of my right hand. I went to hospital to have it attended to and eventually needed 3 stitches. Whilst there, the nurse noted a redness in my feet and thought I might have cellulitis. I was dispatched that evening to a local health Centre, actually in Keynsham, which is about 12 miles away. I was prescribed Fluxloxacillin to blast the disease before it got worse. It is and infection of the layer below the skin surface and if not treated can be dangerous.

My third disaster was after I started taking the pills as soon as I got home and was told to take two to pills four times a day. Also with it I took what is called MMS treatment which concerns chlorine dioxide, and a potent oxidising agent. It is very good on its own but with the the antibiotic it was an absolute disaster. I woke up at 3 in the morning in great pain and had a very strong retching effect. On an empty stomach that is something to experience. I found myself sweating and then getting very cold so I eventually got to bed about six in the morning and slept through till 9:30 where upon I felt better.

On the topic of funding, I’ve recently started a campaign to fund my covid site; so far I have received about £550 including one generous donation of £300. I basically work for 40 hours a week for nothing and it is very nice to be recognised even though I’m not doing it for the money.

Also, my site where I advertise my psychic sessions has come alive and I have had 5 reading sessions over the last week. This is very encouraging and means that I don’t have to rely on gardening for my bread and butter. I was mentioned twice on UK Column which is a very good alternative news broadcasting system which runs on Monday Wednesday and Fridays at 1 p.m. on the internet.