Special article : This is the way to go when a loved on departs this life

This came up when I was on vacation in Cardiff

It’s a great role model if you know someone who is about to depart.

My Sunflower has blown away

This is hardest email I’ve ever written.

My wife Nicole said when she passed she wanted to be in my arms with me chanting in her ear. On Tuesday night, at 11:30pm, it was as she wished. 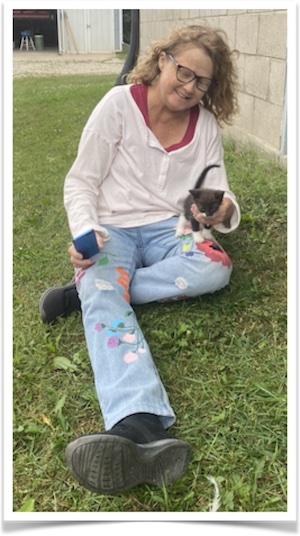 As you may know, Nicole suffered from type-1 diabetes and end-stage renal failure. She has been on hemodialysis for the last twelve years. Most people only last seven years. On Friday, September 9th, after a year of preparation, she discontinued dialysis and chose to pass away at home with the assistance of a palliative care team.

By her ninth day sans dialysis, Sunday, September 18th, her breathing had become difficult, she was experiencing severe pain and she began morphine treatment. By Monday, she was unable to walk on her own. I, my son Jonah, and three friends took her for a 90-minute walk in a wheelchair around the lake near our home… 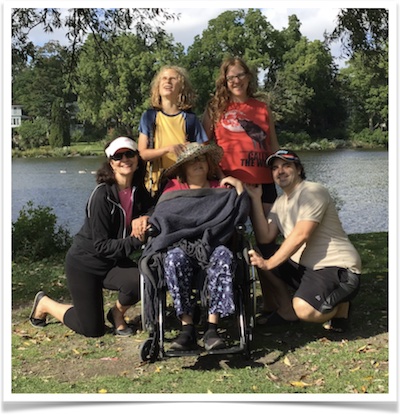 By Tuesday, she was too weak to even go out. Nonetheless, she was fully coherent,  talking and laughing.
Every night, around 8:30pm, we’d been having friends over to chant Vedic religious mantras with her. We usually don’t record these, but I felt the urge to. An MP3 of our final gathering is here.

At 10pm, after I got Nicole ready for bed, I told her this was the first day since she went off dialysis that I hadn’t cried. I told her that I finally accepted that she was indeed going to leave and that it was (probably) the right thing to do. She said she was clear her time had come. She had no fear. She had only been staying for Jonah and me. She asked me to forgive her for abandoning me. I told her there was nothing to forgive.

She told me to sleep in the living room, as her breathing was so loud the previous night it was hard for me to sleep. I left her with a sound bowl to bang if she needed me.

I said I would see her in the morning. She just smiled.

I found her half out of bed, breathing heavily and covered in sweat, making gurgling noises. I lifted her up into a sitting position, and her head slumped forward, as the “death rattle” (which the nurses had warned me about) continued.

I just held her head up and against my neck as I hugged her as tight as I could , chanting OM (the Hindu sound or word for God) as she had asked me to do. It lasted for about two minutes or eternity, I’m not sure. It is the most horrific and beautiful moment of my life.

She thought she was a burden, but love doesn’t feel burdens. I must have told her I loved her so much a hundred times as my mind tried to accept what had happened. I thought she had another week at least. I thought she’d still change her mind. Jonah heard me crying. He came in and joined me.

I then carried her body to the living room, where she had had a hospital bed set up.  I lit candles and Jonah and I meditated and chanted at her side, in between a relentless flood of tears.

Her suffering was over. And it hurt so much.

All of Wednesday, friends from the community came to sit, pray and sing by her body. People kept on bringing roses and we surrounded her body with them… 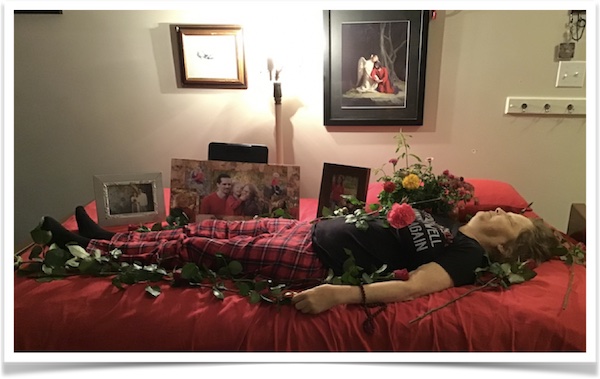 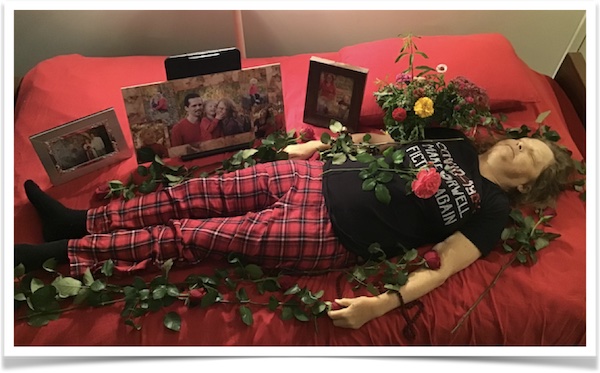 She couldn’t bear her illnesses any longer — 43 years and four forms of life support (dialysis, insulin, blood transfusions and calcitriol injections) were enough. She said she knew her days were numbered and this was how she wanted to go, saying goodbye and surrounded by friends and having as spiritual a death as possible.

Our marriage was the happiest it had ever been. We’d grown so much together. And she had raised a wonderful young man, having home schooled him for fifteen years.

Every day since she went off dialysis I would ask if she was still sure this is what she wanted to do. She would say, “Yes, 95%.” She was at total peace with the decision. Ever since she decided to go, she’s been the happiest I’ve ever known her.I couldn’t bear it, and all her efforts to convince me I’d be better without her “draining me” and pushing me towards other people and activities. She said I needed more time to write and a wife who could do things. But I’d burn my novel if it would bring her back (in a body that wasn’t suffering).

She said when she was gone I’d feel relief. At first, all I felt was more sadness and regret than I thought possible. I didn’t know the heart could feel so much pain. Grief is the price of love, the cost of caring. I let her go because she asked me to, but this is the hardest thing I’ve ever gone through. I can see how so much that has happened over the last year was her and God trying to make it possible for me let her go.
Still, Wednesday was mainly shock and tears. Thursday was hell and screams. Friday peace and reassurance.

And, now, I do feel relief. Not for me, but for her. I sense she is free, happy and active. No more coughing. No more insomnia. No more fatigue. No more racing heartbeat. No more nausea. No more headaches. No more painful dialysis sessions. No more low blood pressure. No more nerve pain. No more brain fog.

Everything went just as she wanted. She was so happy that final night, so at peace chanting and meditating with her friends and family, so grateful for everyone who came to say goodbye to her over the last weeks.

I love her so much. She was an amazing woman shouldering an incredible burden. 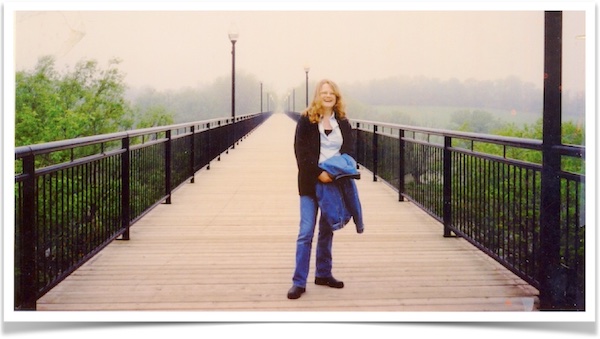 Please pray for her, me and my son my Sunflower takes her lone journey…

—John C. A. ManleyPS I’ll be sharing more in future posts about my wonderful wife and our twenty year journey together and this final experience with death. Until then, If you haven’t seen it yet, here is a tribute to Nicole that I published a couple weeks ago: My Red-Headed Sunflower.

PPS There will be a memorial service for Nicole on Saturday, October 15th. We’ll aim for a live web feed of the gathering, but, at the very least, will have a recording posted.

This followed the next day

3 Surreal Signs From My Wife in Heaven

As I wrote about yesterday, my wife of 19 years of marriage, passed away Tuesday night at 11:30pm in our home, after a lifetime suffering from type-1 diabetes and kidney failure… 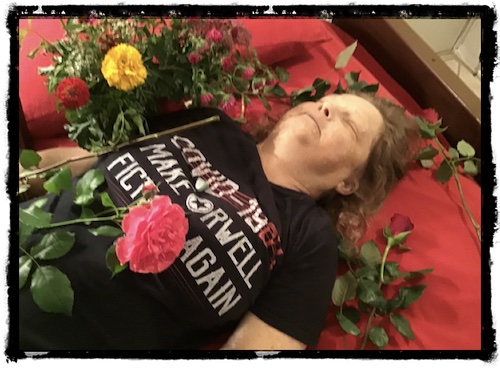 Nicole had told my son and me she would send signs that she was okay after her passing. It seems she has kept her promise. She’s sent at least three clear signs.

1. Thunder: For the next day after her passing, The Weather Network had predicted blue skies. Instead, on Wednesday morning it began to pour… and thunder. We had three thunderstorms that day, after a summer with barely any (due to drought). Nicole loved thunderstorms. Many times this year, she had said she was waiting for a good thunderstorm. Now it feels as if she can make them happen.

2. “Mama”: Our son Jonah has always referred to Nicole as Mama. Amidst Wednesday’s thunderstorms, an email arrived in my inbox from cartoonist Bob Moran with the subject line “Mama.” I subscribe to Bob’s email list, where he releases his latest paintings several times a week. Inside this email was the following cartoon called “Mama”… 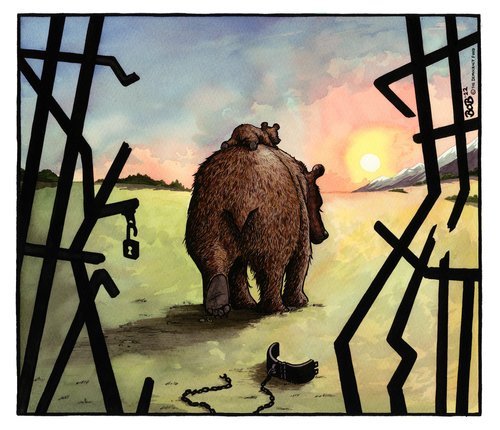 Just as Mama Nicole broke free from the cage and shackles of her broken body. Nicole had worked with a local shaman only weeks before, and believed her power animal was the bear. She also believed that upon passing she would be reunited with our late daughter Skye. Notice how the baby bear is surrounded by the sky?

3. Widow(ers): On Friday, Bob Moran sent out his next painting. At this point, I felt Nicole was just playing jokes on me… 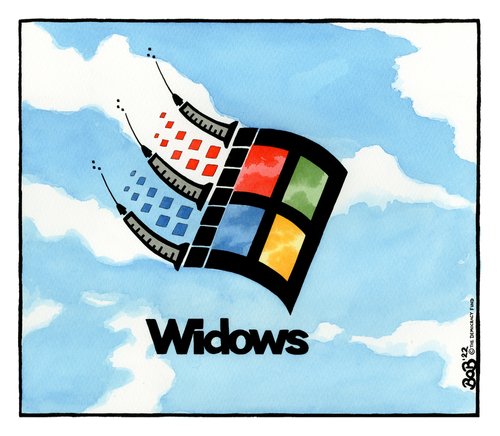 Regardless of these outwards signs, since Friday, I’ve had a growing and overwhelming sense that she is happy, free and helping me, my son and the world in ways we can barely imagine.

—John C. A. ManleyPS My inbox now contains over 150 emails from readers sending their condolences. I appreciate these messages immensely and will respond to each as soon as I am able.

PPS If you missed the post detailing my wife’s death, you can read it here: My Sunflower has blown away. And here is a tribute to Nicole that I published a couple weeks ago: My Red-Headed Sunflower.
________

PLEASE SHARE: Forward this email to friends, family and co-workers or share this link on social media.

SUBSCRIBE: Get this email newsletter sent to your inbox by going here.