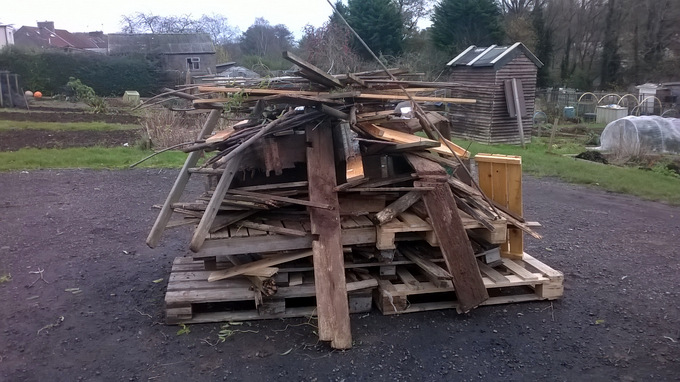 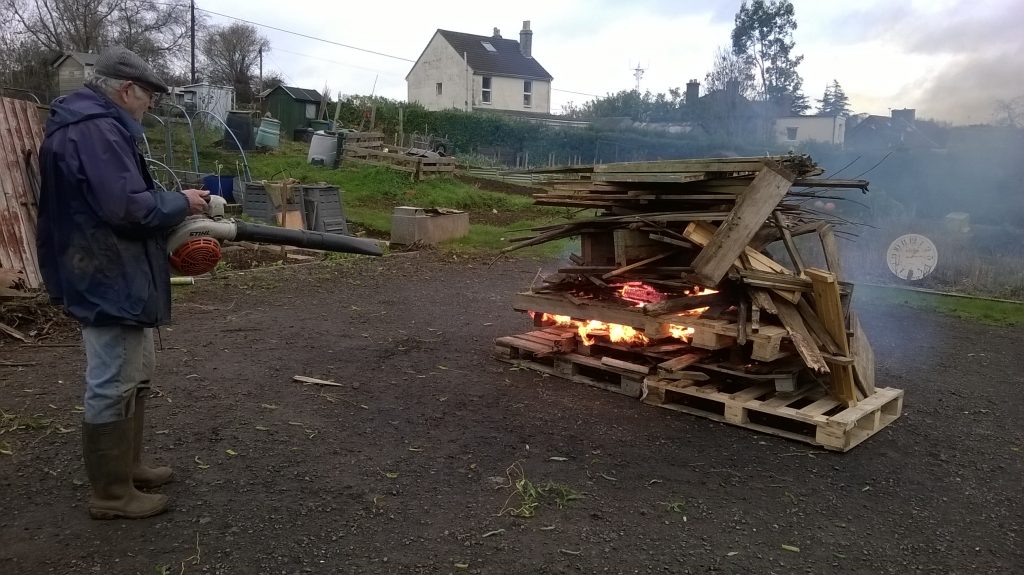 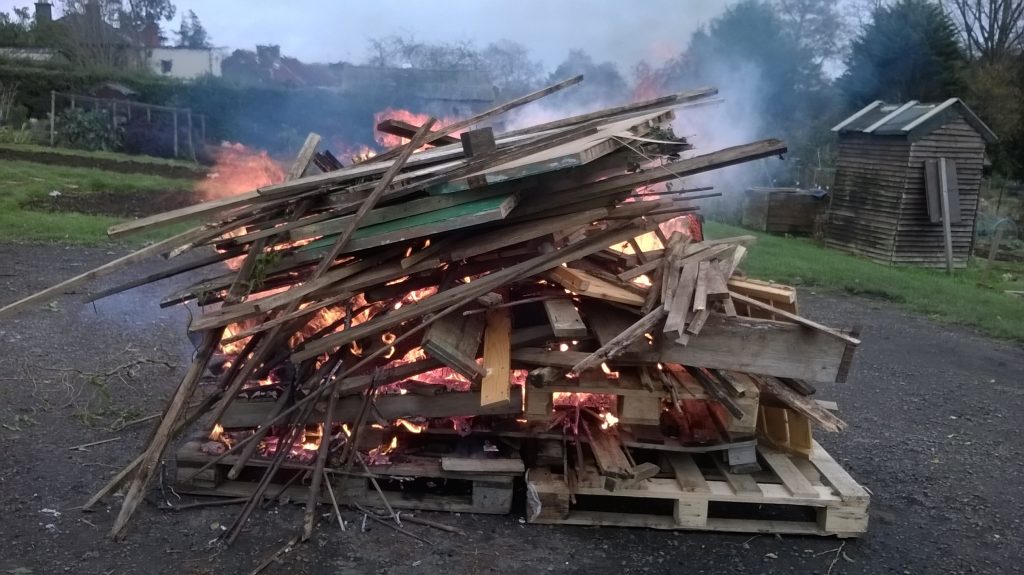 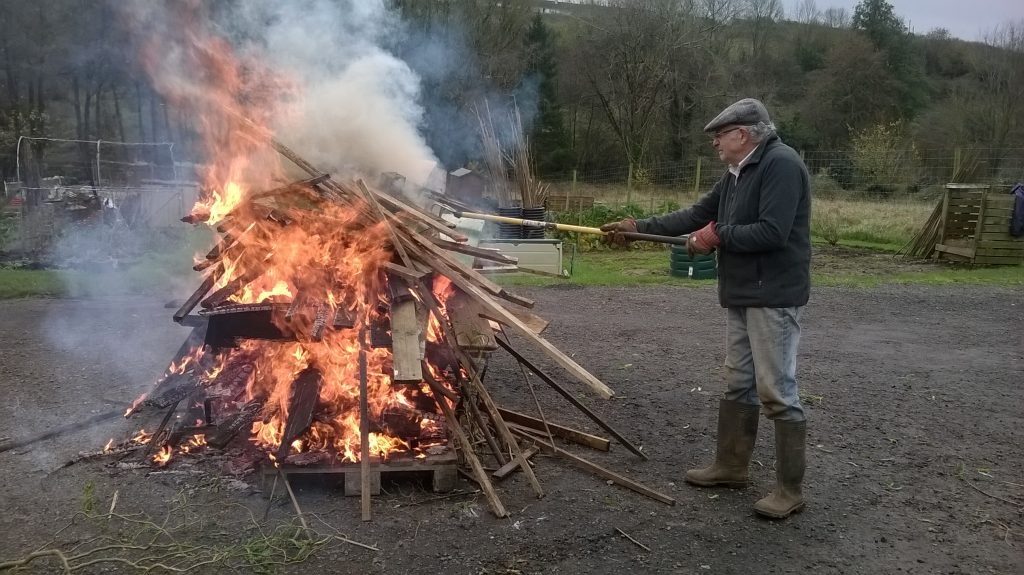 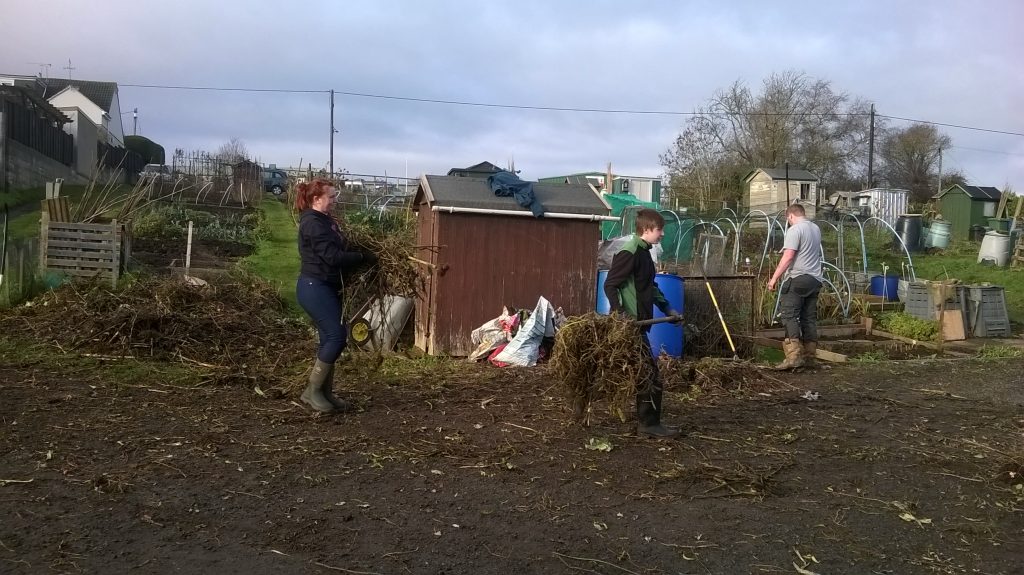 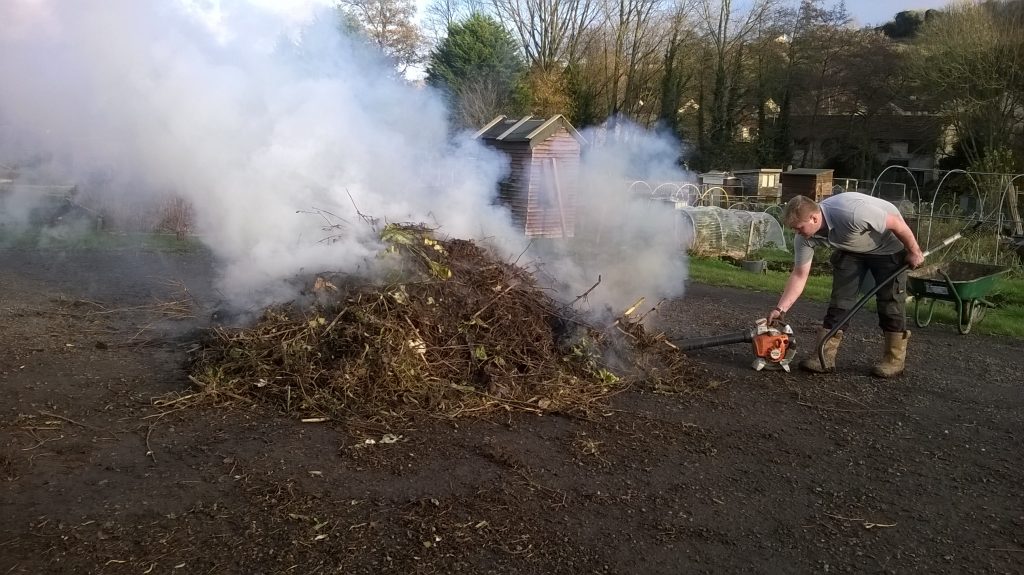 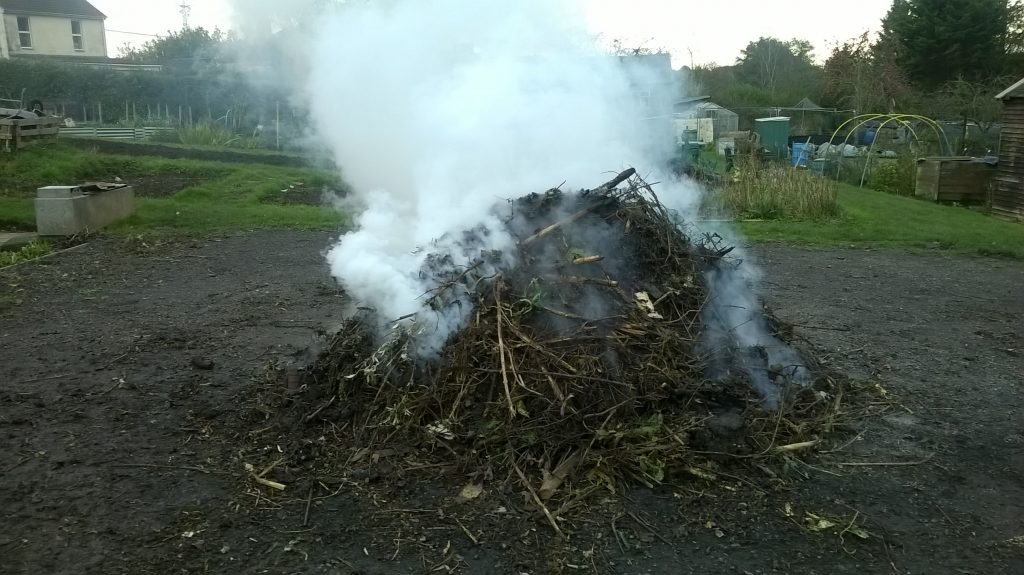 There is something about fire, any fire except when life is in danger, that intrigues and fascinates me.  Yesterday was the great fire of our allotments.  I am  having trouble finding software that will allow me to stitch the videos together to make a coherent picture so until that time, you will have to make do with looking at stills.

As I may have said before, the main thing is to get a good heat and then put on green material no matter how damp on top. We have had a lot of rain recently so a lot of smouldering was needed. However, the fire burnt so well that when I went along today, Sunday, I found that the bulk had been reduced by about 50% . I paid attention to the remainder by using my air blower and I hope that when I go along tomorrow, Monday, it will have burned down to almost nothing…. but then these things go at their own pace.

We had a good sprinkling of helpers, thanks very much everyone, and we could have done with some mulled wine and BBQ sausages but with the current covid paranoia the mood was not quite conducive.

I am electing to rest, today Sunday so this diary is not as complete as I would like. It is after all the seventh day. Tomorrow, Boris will be coming out with yet another restrictive announcement about a virus that does not exist being measured by a test that does not work.

Although many people are now used to the ZOOM technology, a number are not and we had 18 of the 56 allotment holders gathered together this evening for our first ever virtual AGM. Most of the conversation was quite ordinary but important because people like to meet others in a social setting and I think people are missing this at the moment. We asked everyone how well their vegetables grew and this was useful for newcomers.

If anyone wants to take part in this type of meeting remember that what seems to you as background familiar sounds are automatically amplified to the same volume as the speakers. This is called automatic sensitivity control and it makes sure that people with less strong voices are heard. Hearing children in the background can be annoying for others so if that is going to be the case then mute your microphone while others are speaking.

We used the poll facility which means people can vote on things for example in our case ‘do people want any more manure?’ 13 people said yes and 4 said no. Anyone can see the results so it is a very satisfying democratic thing to do. I always circulate the meeting video afterwards. It is useful for those who genuinely could not make the meeting but would have liked to attend. The problem is, where to store 500 MB of data in an accessible form. The lower grade plans of ZOOM allow the storage of 1 GB and you have to pay quite handsomely to have more. I save material on my websites which normally have quite a lot of file storage attached.

The rate of dystopian news about Covid increases as the government gets more and more mad inputting these arbitrary and ridiculous lockdowns or circuit breakers. People do not understand that the ‘Government’ are deliberately trying to depress people so that when the magic bullet comes along, the vaccine, people will do anything to get free from the obligation – as they think it – to wear masks and behave like performing animals. Today I added 24 news items and I don’t mean the mass media but articles of substance.  Keeping up with the news is a bit like surfing, you have to keep ahead of the wave and this can only be done by continual learning of what things are all about.

I know it is difficult for people to comprehend this, but in the UK at least we are similar to the situation that pertained in Germany in 1933 when Fascism was rising and people did not want to believe it. That is probably one of the reasons why the Germans are taking this current so-called crisis so seriously. They see this is a smokescreen for something far more insidious. I see it as the permanent entrapment of our souls and  the termination of the human being as we know it.

There is no question in my mind that we are hard- 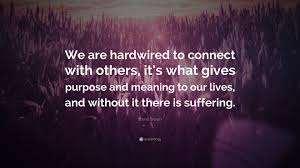 wired to communicate together, especially if we have something in common. In my case, it is fellow Red Pill people who see the world in a different way. Yesterday I sent out 24 invitations to attend a ZOOM meeting. We ended up with 11 people including a very interesting and dynamic lady from California who wanted to buy land and grow food. Somewhat remarkable conversations ensued and I took the decision to record the whole event which took 846 MB, quite a chunk of the 1 GB of data storage allowed for my level of subscription. If I want to have 10 GB I have to pay £30 a month to ZOOM. I’m not prepared to do this so I’m going to give everyone a chance of viewing the video and then delete it next Wednesday when we make the next one.

I thought of streaming the next ZOOM meeting to the grand British public because it’s all very well sharing stuff that we already know – mostly – but it’s another thing to reach out to people who are not really aware of what’s going on. One of the most shocking things is the misallocation of nurses, the complete cancellation of operations (cancer goes on growing) and why oh why are dentists closed? Are they afraid of what the government might say? What about the people in pain? What do they do? This government has been an utter disgrace and I hope that they are made aware of the deficiencies sooner rather than later.

Another lovely day today. We were at the allotments and one of the committee, Will, had ordered a load of manure which he was busy wheeling to his plots. He wants to be dig-free by next year so this is the year to enrich the ground. Almost every plot is in good condition except one or two older people who should have given up their allotment some time ago but hang on and do the minimum to avoid being kicked out. It is very dry here in England at the moment so plenty of watering is needed during this critical spell of growth. Our lawns are already suffering and going dry.

We have recently bought a blender which can either be used for vegetables or fruit. My stomach is playing at the moment so I’m very much enjoying the zero effort of absorbing a rich nutritional mix of fruits both frozen and fresh. Last night I got so disturbed that I didn’t get to  sleep until about five in the morning. I was in pain, and suffering from a bloated stomach all night. My intention is to reduce the intake of food and indeed wine and tempting sweets that you can by in the supermarkets that have far too much sugar to do me any good. Today, so far so good as I write at half past nine in the evening.

We suffered from ‘the claps’ today. Everyone walked down the road and met together and started clapping at eight o’clock. In my view there have been completely conned by the government and BBC propaganda and have no idea that the nurses are standing around doing nothing having been allocated to COVID wards from other wards that should have been busy with  doing operations.  Incidentally it is quite shocking to read of the effects of the lockdown on people. In California they had a year’s worth of suicide in four weeks and has been a marked increase in the amount of child abuse not to mention depression and alcoholism. It just shows how little those who rule over us care about human beings.

We are considering making long term plans for food growing and storing. I don’t know how long we will survive without electricity because that does drive the sewage and without sanitation I think life could become unpleasant. I wonder if we should get a pot and dig holes in the garden. If the government has its way, our lives will never be the same again. Nevertheless, when I serve others I’m happy and fulfilled so that is what I intend to continue to do.