For those of you who are not familiar with the term triptych it is  borrowed from art where three sections of a picture related to the same topic are displayed.   My day was nicely divided into three.   The only cloud on the horizon was the fact that Brent crude oil is now $80 a barrel which means that instead of paying 129.9 pence per litre unleaded petrol it’s probably going to go up to 135 pence or even 140 pence.  Anyway, leaving that aside for the moment……

A splendid day which started off with my getting the leaving service of Guy Edwards one hour wrong so I turned up at 11 a.m. To find the service almost finished. In fact it went on for some time  but at about 11:30 everyone came out. I made my confession to guy that I got the time wrong but he said will come along to the party anyway which was in the church hall opposite the church here in High Littleton. 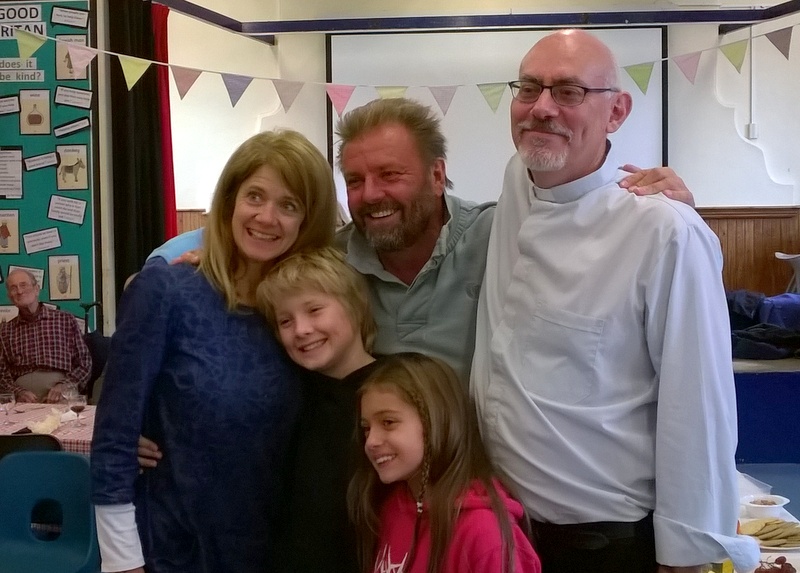 Martin Roberts with his family and Guy Edwards the departing vicar

There were about 60 people who attended. I met the presenter Martin Roberts of ‘Homes Under the Hammer’ (above)  which is a popular daytime programme on BBC who apparently lives locally with his delightful family, three children.   I do love meeting full-on type people because all their antennae are waving in the breeze and they instantly pick up on anything you say and examine it and question you.

I had the chance to get my pitch in for 3DS, smart meters and mobile phones and he got it straight away so he was completely amazed and uninformed which is not surprising bearing in mind the reluctance of the media to talk about such things.   Next to him was a very traditional dapper chap in a tie who had a deep understanding of sanskrit and had travelled all over the world.  On a good day the Church of England does have some very interesting people as I’m sure do all religions but I’ve been brought up in the Church of England so I would say that wouldn’t I.

I must say church people know how to lay on a spread if they want to I enclose two impressive videos. A single image would not have done justice to the spread hence the use of video.

We then made a presentation to Guy, birthday candles, general jokes and light heartedness but a very good brief address by a retired preacher.

Not included in the video was a funny poem written by one of the ladies, reproduced below. 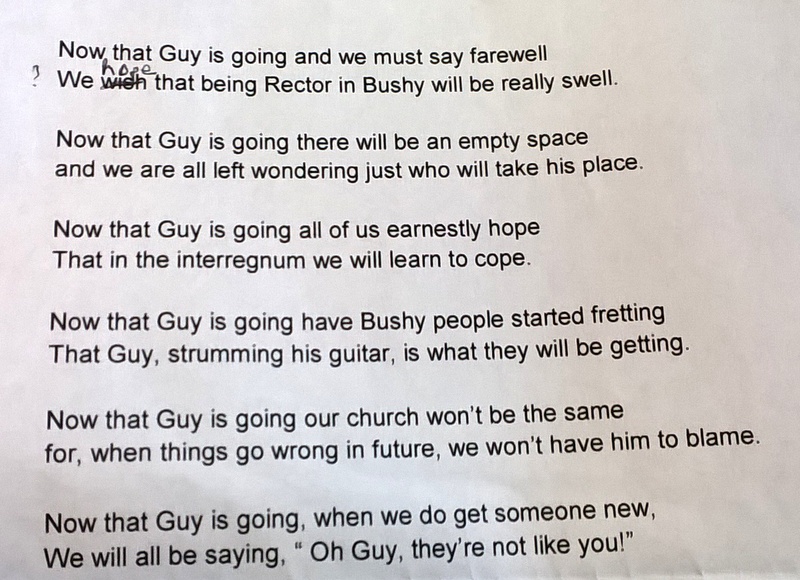 A good time was had by all and there was a very strong sense of blessing  and made me feel that in spite of all the dreadful things going on in the world there is still the ability to share, to put your troubles aside and celebrate human caring and faith.

The second part of my triptych was waiting for me at home in the form of a friend I had met through a circle group which is I suppose another name for a forward looking committee. We were discussing the value of the internet in general and how valid it was as a vehicle for expressing one’s own beliefs. I was informed about 2 new websites where people discuss the difficulties that men and women face when they interact, where such topics as feminism is discussed.  One was called ‘men going their own way’,  MGTOW  and the other one was a very niche sounding Chateau Heartiste.  You can look them up on the Internet if you like but they are both quite intellectual sites containing people are capable of showing a concentration span longer than 5 seconds which I understand is about the average these days.

Facebook has been designed to be addictive and like all drugs it is very difficult to wean yourself off from the small doses of dopamine that you receive every time you get a like or a comment. Overall I believe it diminishes the art of disagreement.  You either abuse the other person or simply walk away.   My website on 5G is very comprehensive but most people don’t get beyond the first page also, most people visit from mobile environments where it is more difficult to appreciate the sheer scope and size of the offerings I have on hand.

The third part of the triptych was dinner with two friends in Bath.  There is something very pleasant and womb-like about being in an environment  where you can tell jokes, often very bad jokes, and actually be appreciated for who you are.  I sometimes wonder whether I’m losing the art of conversation but I realise that in the right circumstances there’s no stopping me and it is immensely stimulating  and brings out all sorts of wisdom that I didn’t realise I had. I love doing spontaneous psychic readings for people and when I don’t try too hard I get it bang on each time.

We have a plan to have people round of a weekend, typically, workers who are stressed by a difficult working environment. I hope to start this next spring. We cannot actually put people up because our place is too small but we can entertain them during the day and give them the feedback they require to sort themselves out somewhat. The main environment in UK is one of make and mend, hopeless prevarication about Brexit,  lying policeman, corrupt judges, and in fact we get more like America each day. I regard America as the gateway to hell sad to say. 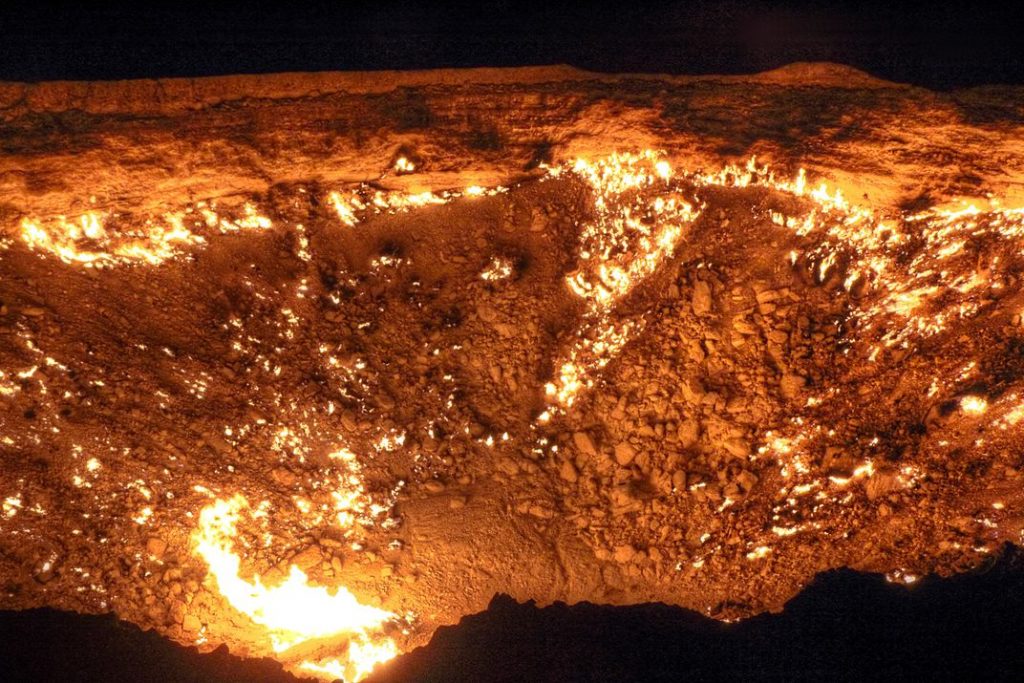 This Hellish desert pit has been on fire for 40 years.  There are places on Earth that are a little creepy, places that feel a little haunted and places that are downright hellish. The Darvaza gas crater, nicknamed by locals “The Door to Hell,” or “The Gates of Hell,” definitely falls into the latter category—and its sinister burning flames are just the half of it. Located in the Karakum Desert of central Turkmenistan (a little over 150 miles from the country’s capital) the pit attracts hundreds of tourists each year. It also attracts nearby desert wildlife—reportedly, from time to time local spiders are seen plunging into the pit by the thousands, lured to their deaths by the glowing flames.

But as I write the day after, (another sunny blue sky Monday)  the sun shines and I’m reading in the paper that at least 800 people  have been killed in a earthquake in Indonesia and have lost all their possessions. Who am I to complain?