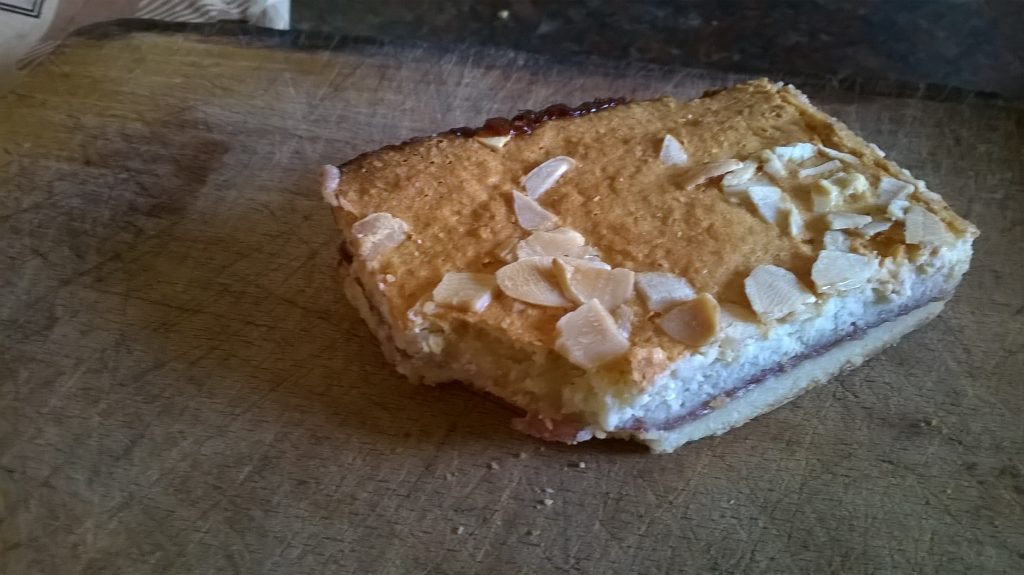 Opposite Lidl in Midsomer Norton there is a bakery. I just wanted something to fill me up; my eye caught some almond slices. On visual inspection they appeared to be a bit dry. However I thought for £1.40,  I would give it a go. That was a mistake.

It was a bit like eating a bomb of sugar. After literally one mouthful I felt sick. I’m not a great sugar person but this was so way over the top that I could not eat any more. Also, I could not taste any actual  nuts. I cannot remember the last time I returned a food item to a shop. It must have been a long time ago. This caused me to reflect on what I should do when this type of thing happens.

# Shrug shoulders, throw it away and vow not to make the same mistake again
# go back to the shop, tell them it’s disgusting and inedible and either demand a refund or something else instead
# mention it on the next occasion

The problem was the lateness of the day – it was unlikely that the baker would have been there at 3:30 PM on a Saturday afternoon. If I had complained to the very nice lady who sold it to me I don’t know what effect it would have had. As I deal with her frequently, I do not want to be associated with a person who complains. Had it been from my old stamping ground in London I would have certainly taken it back.

This brings me to the discussion about complaining. If you do a search on this site you will have found I’ve discussed this subject before. I think we have to take into account the value of the item and its longevity. If example it is a white goods item on item that will hopefully serve me for a year or more than I would definitely take it back. I’m not sure about taking back and item worth £1.40

My decision was that on a sunny afternoon I didn’t want to spoil it for myself and for other people so I’m going to let it rest. I will assume that it was a one-off because the food I have got from there is normally very good.

The last occasion when I had cause to complain was at Shearings in Ilfracombe where we got served a nicoise salad they had about one layer of very limp lettuce on it with half a tomato and some small pieces of toast. I should have sent it back straightaway but I was so shocked, again against a background of good food that by the time I had recomposed myself the moment had passed.At the Old Down Inn a couple of weeks ago we had less than good service and I had to ask twice for some water when it should have been offered automatically.

In general, British people are not complainers although they do whinge. They would rather complain afterwards to someone else rather than face up to the management and tell them their problems.  My last successful complaint when I was in Tenerife; the bed was rock hard solid so I went down to complain saying I could not stay at the hotel if I could not sleep. By magic, and over-mattress was organised for me so I guess that’s not the first time they’ve heard that complaint.

I do cringe when I see other people complain. They are so vile in their temper and so immoderate in their language and they exaggerate. I can see the service agent is preparing himself to give as good as it gets and really no one wins. I think the best plan was complaining is not to complain but to discuss. You can’t fight adrenaline. Also, don’t apologise for complaining otherwise this invalidates your complaint. You don’t apologise for praising so why apologise for the opposite. It is necessary information that needs to be imparted.

Folks, don’t forget the golden rule. It’s not only what you say, but how you say it and when you say it. If someone is dealing with another difficult customer you don’t butt in. If you are angry, it’s probably a good idea to take the proverbial walk around the block, come back, and make a statement without raising your voice.

I have erred in my time.  I jumped into someone’s parking space at the recycle yesterday and he rightly complained by shouting at me and banging the top of my car. I responded by imitating him, not losing my temper but banging on the top of my car to imitate him. That had the effect of calming him down.  He asked me to back out. I did so with a smile. I think if we can avoid any sort of physical or mental threats then life would be easier for everybody.

I remember my days in America where service is (or was20 years ago) supreme. Had that happened there they would have regarded it as a point of honour to replace the item or service, or not to charge. Things are a bit different here in Somerset. In Scandinavia the problem of complaints does not arise because the food is served to a good standard. I can say the same for France. And also for Singapore. The competition there is so fierce that people would not dare to serve bad food. In South Africa the quality of service depends on the ability of the servers to understand your language and your requests. Basically, allow for more latitude unless you are in niche places like Stellenbosch which is one of the wine centres of South Africa and where the wine companies via with each other for the quality of their wine and food. South Africa leaves a good taste in my mouth, pity about the politics.