Up early at seven o’clock to drive to Frome for a breakfast and preparation for a large Christian men’s event run by Men United. The  Cheese and Grain is a large working community with a restaurant and Hall that is used for a variety of events mainly musical. You never know how many people are going to show up and I thought it was quite brave of the organisers booked such a large venue. At 9 AM, one hour before the start, most of the preparation had been finished. By 9:50 AM, however, the hall was pretty much full and I was told by the hall manager that there were about 280 people seated.

I decided to welcome people by standing at the door with a sign on my jersey reading “welcome”. I tried to figure out whether the visitors were already members of the churches of which there were four in participation  or whether they were the public just coming along to see what was going on. The latter was the aim; to attract the unchurched so to speak and as I sit here at my computer reflecting  on the meeting I realised it was difficult to spot who the newcomers were.

I would say the average age of the men was about 65.  There were a few “spotty youths” as we would say but they were friendly people but perhaps a little bit unused to the Happy Clappy atmosphere engendered by the music. 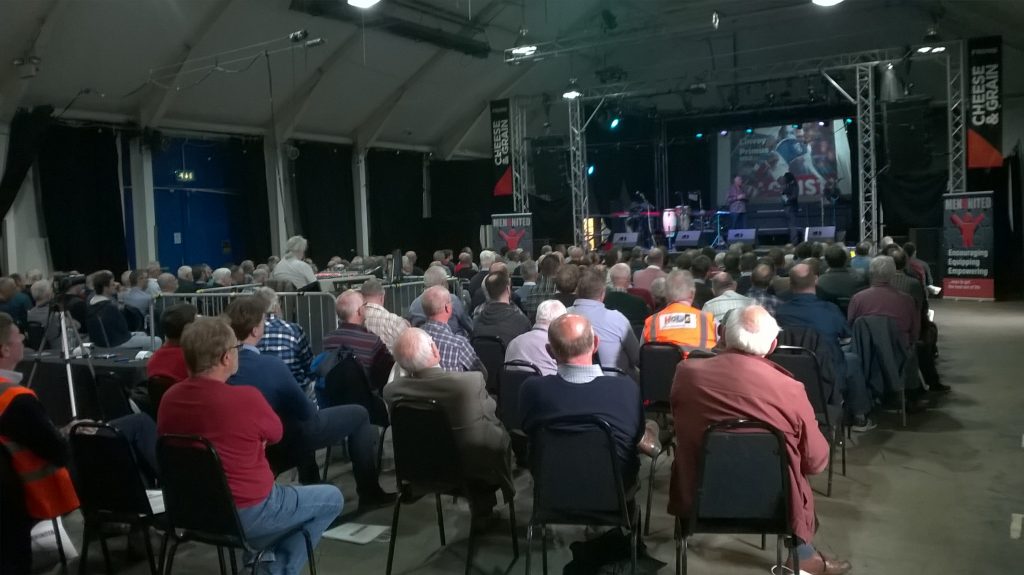 The event had laid on tea and coffee which participants could help themselves to and it was very nice as a greeter to be able to direct someone somewhere specific rather than just pointing to the innards of the hall.

People said some strange things when they entered. One chap said “good evening good afternoon good morning” and said “I really don’t even know what day it is”. Another chap came along with his flies undone and as the un-doneness was rather flagrant I had to tell him he should do something. I said that we don’t mind because we are all men but he said he did mind. We all had a laugh at that.

And then, the atmosphere changed.   I was then that a slim female appeared at the door to whom I took an instant dislike. It was a smile as I did not trust – here was a lesson for me never to get entangled with such people. She asked a question about whether women were allowed in and I said in my normally non-PC way, no, it’s an event for men, thinking to myself that if it was an event for women there is no way they’d allow men to come in. She asked me all sorts of questions about what we did and what the programme was. I got the impression she was asking for the sake of it and not because she really wanted to know. It was an act, a fake.

I haven’t a clue what the detailed programme was so I went off and found her a copy. There was something profoundly untrustworthy about her. I think it was either the passive aggressiveness or the veiled hostility towards men. Interestingly, I found myself shaking and continued to shake for about 10 minutes afterwards. This is my sign that there is entity activity somewhere and a person is not who they seem.   I felt, rightly or wrongly, that she wanted to hit back at people. Later on, the manager came up to me and said there was a policy that no one is excluded so obviously she had made a complaint. He was good-natured enough and said to me “just so that you know” in other words a non-combative style. I responded that I understood

In future, if such people come across me I will say as little as possible because whatever you say will cause anger or irritation because of their predisposition. I think these people are dangerous because they know they can accuse people of being discriminatory. Someone else asked if the meeting was sexist and I said ‘no’ it is specific. Had I had the time I would say that women’s yoga classes can be specific to women who choose to do yoga with other women. I think it is pointless trying to engage with such people because they have their minds firmly made up and to explain your side of things is a waste of breath.

The event started, of all things, with a darts match. 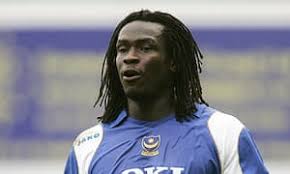 The first speaker was the footballer Linvoy Primus CBE who had been a leading footballer with many clubs. He was describing how it was that his faith emerged, an event that happened to be preceded by a high flying, high living  but insecure life.

There are several reasons why I found his performance riveting. First, he was completely honest about his successes and failures. Secondly when he came to faith he described all his defense mechanisms against Christianity when finally being persuaded to go to church. He decided in advance  no handshaking, no handshaking with smiles, and no shaking of hands with smiles with eye contact. However he found that he broke these three rules in the first 2 minutes so obviously underneath there was a believer trying to get out

The retired footballer spent a good three quarters of his time telling us about his life. A challenge and invitation normally comes at the end of an evangelical speech  but this did not quite happen. He gave a witness testimony about when he gave his life to Jesus, not just in name but in reality in so far as it affected his day to day activity and relationships to his fellow football players.

I spoke to him personally afterwards and discussed the difference between the meaning of the word ‘combative’ and the word ‘assertive’. We agreed that the state of mind was the most important thing and you could not tell that from someone’s behavioural characteristics.

I think the way to get people converted to any new idea is to be boyishly enthusiastic yourself and bring people into your orbit by almost a magnetic attraction.  I like the way he did not paint a rosy picture of belief saying that you are going to be criticized for your faith in what is largely a nonreligious world.

I have a chat with my friend Ian, a vicar at a local church, and we talked about Linvoy’s Charisma.  The word means “compelling attractiveness or charm that can inspire devotion in others“. I started the conversation by saying that everyone is potentially charismatic if they are true to themselves. Ian said he thought it was a matter of practice in terms of projection and speaking before an audience.  I replied by saying that I think everyone can develop this quality but in some it is more extant than in others. We also agreed that if you don’t know who someone is you’re not going to take anything they say at face value.

We broke for lunch at about 12:30 PM and I escaped outside. I went for a wander around the open-air food market in Frome which happens every Saturday in the parking area just in front of the Cheese and Grain.  I had to run out of the hall because I felt that somewhere near me there was a Wi-Fi router. I was getting unpleasant prickles in my head and in my hands, the usual thing with me, but knowing the reason doesn’t make it any easier let alone be able to concentrate on a topic.

I returned to the hall  in the afternoon at 2 PM to hear Mike Hall, Ex. Bishop of Bristol, talk about an accident where his wife nearly died and the effect it had on his faith.  It had a good effect on his faith by the way.

My standards for speakers are quite high. I don’t want to see any form of exhibitionism, I want people to admit their faults, and I do want to see a speaking from the heart. I don’t mind if the technique is not brilliant. They say that Mother Theresa was not a good speaker but the conviction of her words riveted everyone who listened.  It is a pity that she recanted aspects of her belief at a later stage when she had retired.

One of the reasons I sit at the back of the hall is that I can escape if I find the subject matter boring or I can pace around. In this case the tea and coffee and biscuits were at the back which gave me the opportunity to nibble discretely at some rather nice digestive biscuits.

Reflecting on the whole day, I was glad I went. The darts at the beginning was a complete puzzle to me. I don’t think that many men over 65 are interested in the game but it did engender a good mood and the group mind we can say. Whether that is a good or bad thing I do not know, but people did stay through the whole day and seemed to enjoy themselves. During the breaks, many people had any major discussions with each other so in view of the fact that the whole thing was paid for and therefore free, I don’t think anyone can complain.

In part two of this diary I call shall consider whether Frome is worth living in as an area and what types of people are attracted to it.