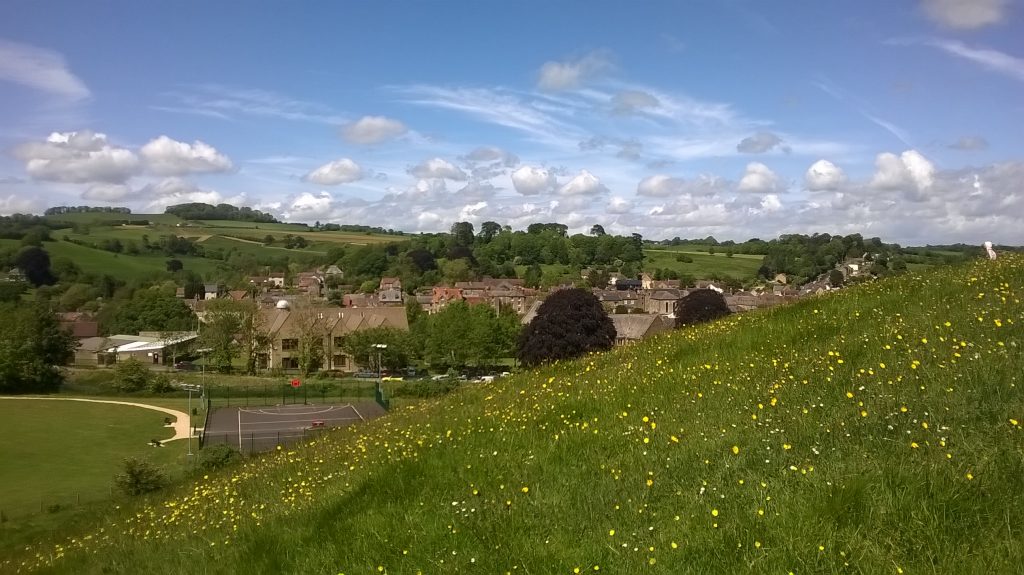 Bruton in East Somerset, is one of the more affluent towns in our wider locality. As soon as you meet the local inhabitants you can detect their affluence and the fact that they have time to enjoy themselves, time for other people and are not too troubled by the exigencies of this life. Below is an example of a group of people meeting over tea in the local church of St Mary’s. 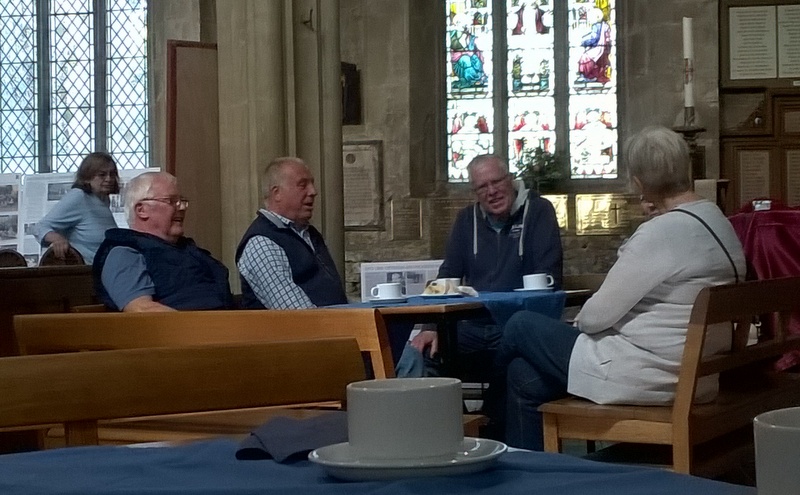 As I sat down to tea, I noticed a person with the apparel of a Franciscan monk with the familiar brown robe. We fell easily into conversation. It turns out that he had been a member of Hilfield Priory, one of half a dozen Franciscan monasteries in the UK. John as he is called is now retired and moved up to what he calls a tertiary level. He comes along to St Mary’s Church most afternoons and sits and talks to whoever comes along. He feels his main mission is to listen to people and respect the differences between everyone and effectively we all have lives that are unique.

We discovered to our great amusement that our birthdays were one week apart in the same year, 1944  so we discussed what a splendid year that was and what a fortuitous time to be born. He said that although he is officially retired he will never retire.

He recommended a book called “Falling Upward: a spirituality for the two halves of life” written by Richard Rohr.  When I got home I immediately ordered the book because it was recommended in love and caring by someone who was obviously pretty good at evaluating people. John had figured out that I might want to read this book so once again, Amazon, here we come. I find if I do things immediately, everything goes in phase with a good result.

He further recommended that I consider the Priory for a retreat of a few days though it was me that maybe initial enquiry. They have a policy that they don’t charge a fixed accommodation charge but they ask people to give what they can manage. Evidently, last year, they made a surplus of £22,000 which they gave to charity. I do have to admire them for that because I would tend to ask a fixed fee. To a very small extent with my gardening I do make allowances for people who can’t spend so much on getting their garden nice …but this is a different league, big-time stuff. The monastery has eight single guest rooms and a couple of twins. The  house is open from Tuesday to Sunday so Monday is their day of rest.  It would certainly do me good to be my own, calm down, and spend some time reading and in conversation without having my mobile apparatus or my PC to hand. I’m sure the world can get on very well without me.

Today, there was the Bruton (BA10 0AW) Packhorse fair, a slight misnomer because there were no horses never mind Pack Horses but there probably were at some time.  I could be slightly acerbic and say that it was a combination of a higher quality car boot sale and a food fair with musical entertainment for all ages. 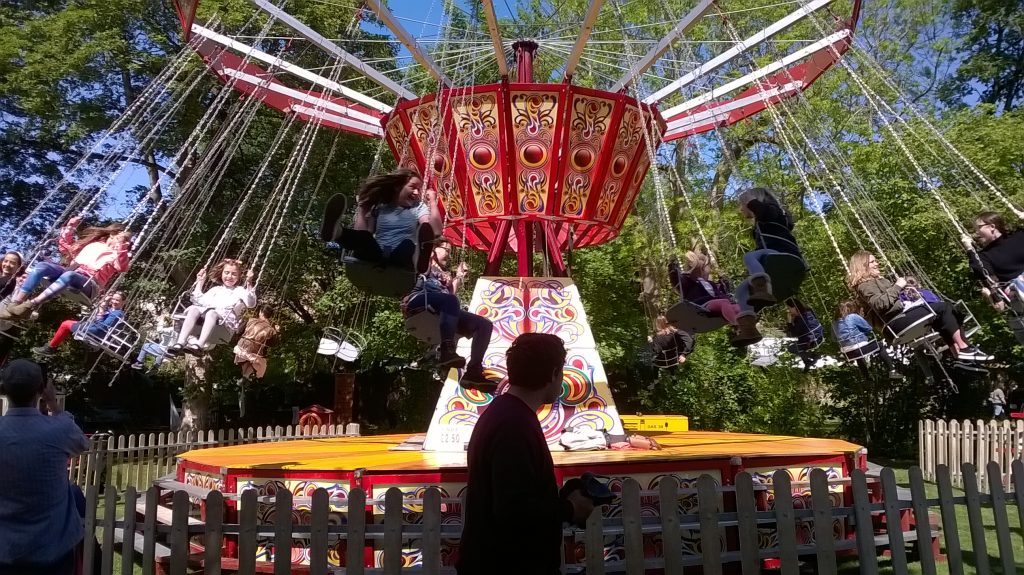 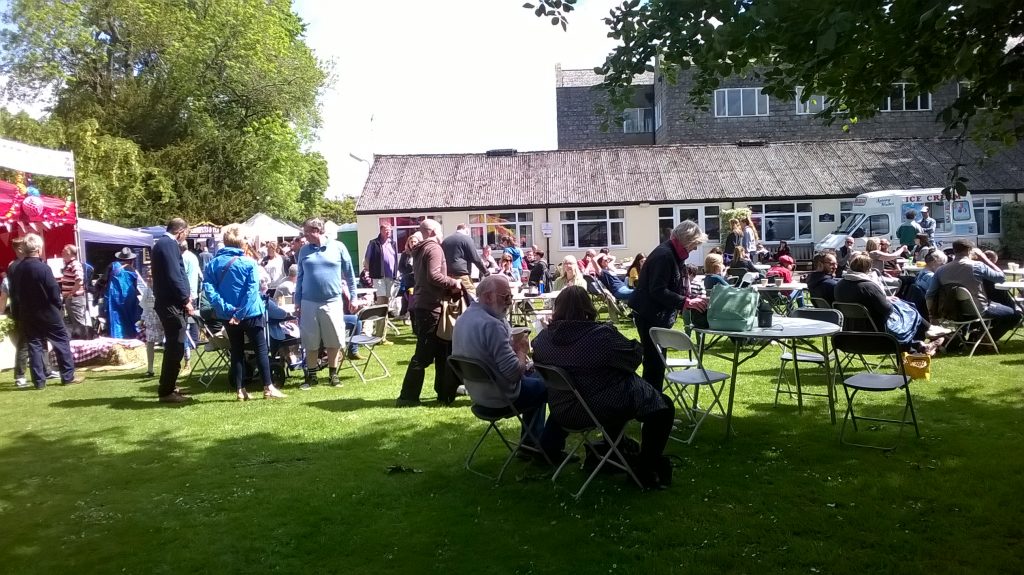 The area is remarkable because there are three good schools of high-quality and this was reflected in the behaviour and  comportment of the children with scarcely a mobile phone being used as a phone. 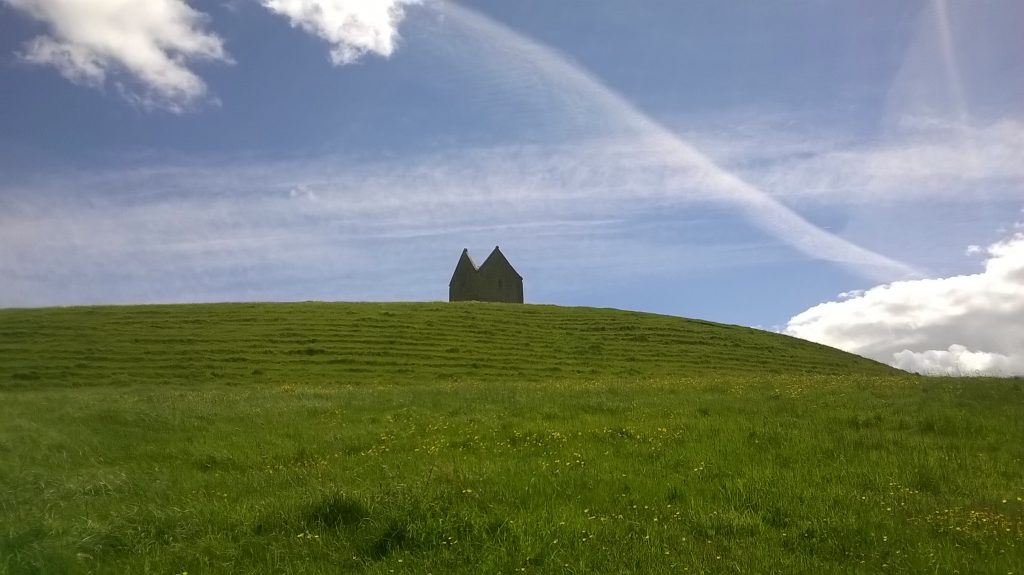 We took some time to walk up a hill, natural or constructed I do not know, to visit what is locally called Dovecote House. It is now abandoned but was originally a limestone tower built between the 15th and 17th century. The building was used as a dovecote to house pigeons and doves. It was acquired by the National trust in 1915 and they have managed the site since then undertaking restoration work. It is a magnificent sight and well worth the short walk but you need to be fairly physically fit to manage the steep gradient.

At the end of the four hour window that we had allocated, we had seen  and done enough. One can only have so much tea and cake. I did not get a chance to have a go at the Extinction Rebellion stall. I find that people are brainwashed and seem to have the  idea that the world will auto destruct in 12 years unless we removed our precious natural fertiliser, carbon dioxide, from everywhere. It does seem to me a case of bad science supporting bad science all of course funded by the industry that stands to gain, namely the carbon credit industry.

We said goodbye to our friend Andrew who as I write is driving up the motorway to Manchester where he lives. Back home we washed the sheets in preparation for our next guests arriving this Wednesday evening.  We love having guests. It’s lovely when they come but we also need our own space so it’s great when they go but we need to have the feeling that we have given them a great time. It is very noticeable that some guests do not disturb the environment at all and are more or less family. You don’t have to put on a particular show in order for them to feel at home, they can make themselves a cup of tea and so on and that’s the sort of guests I like.