I love the National Express tracking service. All buses are connected via GPS and their position is updated every minute. you can load your PC via the coach tracker aspect of their website and report to any passenger who might be sitting in the coach exactly when they will arriveor exactly where they are. This is a great help to Françoise who is prone to becoming anxious when travelling. I text the information to her.

We had an interesting morning deciding whether Francoise should go by bus or by train because with the M4 closed it was a question of whether the coaches could negotiate the undoubtedly increased traffic on the alternative routings.

We already re-booked the coach on the same route leaving one hour earlier. I told Françoise not to make any decision until we got to the bus station whether she went by bus or did not want to risk being late by taking the train. The train was £33 single which is neither here nor there compared with the cost of the Eurostar ticket and she had bought the cheapest bus ticket which means there is no change possible. 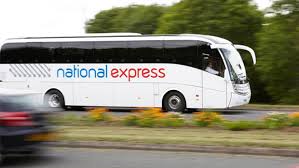 Timing is everything and we made as it turns out the right decision at the right time. We arrived at the coach gate. Françoise saw that the driver was the same as she had had when she went to London a couple of weeks ago and that inspired her with some confidence. The driver was not able to give assurance to Françoise that the bus would arrive on time but gave the latest estimate as 1:30 PM this being from a 9:30 AM start.

She was torn between the train and coach but decided to take the driver’s word for the time of arrival so I agreed with him and encouraged her to get on the coach. The coach went via the A3 not the M4 and arrived 27 min late at 12.57. She told me that as soon as she sat down in the coach seat she relaxed because there was nothing she could do but see what comes. I think that’s very much like the situation in life, you have to make a decision and I encouraged her to make a decision not to soon but at the key moment when she had the most information.

In our seven or eight years of travelling together we have never made a bad decision with regard to travel. It’s something I have a very good instinct about and it has not let me down on this occasion.

I took my new mower back to Kilmersdon complaining that it was under performing in the mechanic found that the blade was blunt. This I could scarcely believe since I used it only three times since it was new but he took my word for it and sharpened the whole thing. This business of taking people’s word for something happens far more frequently in the country and far more with local firms than with large corporates. I know it’s a bit obvious to say this but it does make living in the country a more pleasant experience. I suppose a part of this is that you suffer if you get a bad reputation.

I also went to see a rather large new interesting gardening job. The lawn is absolutely huge and very overgrown so needs mowing,and she wants to create an orchard and a place for wildflowers. She also wants a couple of beds cleared and a tree cut up and removed. This is the sort of job I really love doing. We have the policy, Francoise and I, of maintaining our savings. We work just enough to cover our bills so that our situation at the end of a given year is about the same as it was at the beginning.

To celebrate everything in general and nothing in particular, I went to the wonderful Mells shop and cafe and had a main salad plus Almond tart, lovely coffee, and some local vanilla ice cream.

The sky was blue and the sun was shining brightly. Spring is here.