It’s amazing what can happen at 9:45 AM on a Sunday morning when any civilised person is lying in bed or drinking first coffee or even sound asleep. Due to my misreading of a directory announcing Open Garden Days, I completely mistakenly called up somebody who was not due to show their garden today. She called back in confusion and we had a laugh about the misunderstanding but we decided to meet anyway because we struck up a jovial and convivial conversation on the phone.

…during the very interesting conversation when we discussed our respective interest in energy work and healing….. She is a reflexologist of many years standing and has a lot of skills in her basket. During a discussion about how to deal with patients who did not necessarily want to face their condition, the word “provocation” came up. I realise that I had understood this word in its negative connotation, incitement… to violence etc. In fact it has a positive connotation as well which is something that provokes, arouses or stimulates. Under certain circumstances, we felt it is completely factual and correct to provoke someone if that will be the trigger  to help them to face something which perhaps they have not faced before.

Such interventions do not have to be invasive. For example with a client who has visited many other types of practitioner without success, maybe complaining that they were not good enough,  it will be quite valid to ask “what do you feel these people have not done for you”, or “what would you like to achieve with me that you did not achieve with the previous people”. This is a provocative question but it is quite correct. The dreaded Political Correctness determines that you should not say anything that might upset people with the result that the language in its colour and vigor gets watered down. This is no good to man or beast. We can feel if something was said with love and normally there will be a positive response.

I feel that with any sort of therapeutic intervention, in a way the less we say the better. I think there should be more focus on observing the effect of your statement rather than aiming for a record word count. We should not be evaluated by the amount we say but by the amount of material that is released through our presence and through our gentle probing. The reflexologist said that over the years, the art of reflexology  which is  massaging the feet has become much more gentle. 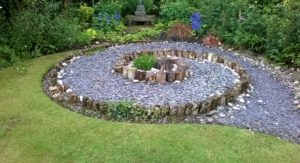 The lady concerned has a lovely house which she has transformed from a fairly scruffy residence bought 30 years ago into a little Garden of Eden. She has a small consulting room, see picture, which is very much like a womb and where anyone could feel comfortable so this gets any session off to a flying start. She does allow a little bit of time between sessions so the outgoing person does not meet the incoming person and thus boundaries are maintained. She very wisely clears herself between sessions to avoid any cross contamination.

She said that her garden had come to be in the state it came to be over a number of years and although friends have given comments on how the garden could be  she let the garden speak to her. She reminded me very much of Barbara Hepworth the sculptor who had her stones assembled outside in her yard and they would call her when they wanted work done.

So now on to Wells where in the Cathedral precincts there is a three-day country Festival and being members we get in free. The festival grounds are spacious and varied and are able to accept shows and exhibitions on a small scale and it does not compromise the dignity of the Cathedral at all. you can be pretty certain that you will get plant stalls, garden machinery, pimms, various animal and plant preservation societies, honey and gem sales. Everyone smiles a lot and are very civilised even the children. when I was young we used to call it “on my best behaviour” and praise the good Lord there wasn’t a single mobile phone in sight.

For those of you that have not been to Wells Cathedral Gardens before it does cost over seven pounds to get in but you have a huge area to see, very historic and beautiful, including lovingly maintained allotments so it is well worth it.

Then, off to Mells which has its own annual garden festival which basically means that you can go and snoop around people’s gardens and see what they are growing and get ideas. However we had been the previous year so decided not to spend the money and time. I am blessed or cursed with a photographic memory and once I’ve been  somewhere, revisiting a known location rekindles the original version in my brain and there is not much “new” to see. You can see now why I require at least half a dozen things on my mind at the same time including at least one thing to worry about.

Up and by water to White Hall, and there to a Committee of Tangier, and had occasion to see how my Lord Ashworth —[Lord Ashworth is probably a miswriting for Lord Ashley (afterwards Earl of Shaftesbury).]— deports himself, which is very fine indeed, and it joys my heart to see that there is any body looks so near into the King’s business as I perceive he do in this business of my Lord Peterborough’s accounts.

Thence into the Parke, and met and walked with Captain Sylas Taylor, my old acquaintance while I was of the Exchequer, and Dr. Whore, talking of musique, and particularly of Mr. Berckenshaw’s way, which Taylor magnifies mightily, and perhaps but what it deserves, but not so easily to be understood as he and others make of it. Thence home by water, and after dinner abroad to buy several things, as a map, and powder, and other small things, and so home to my office, and in the evening with Captain Taylor by water to our Tangier ship, and so home, well pleased, having received 26l*. profit to-day of my bargain for this ship, which comforts me mightily, though I confess my heart, what with my being out of order as to my health, and the fear I have of the money my Lord oweth me and I stand indebted to him in, is much cast down of late.
*The pound sign stands for Libra, a pound weight, in Latin.

Poor old Pepys, his heart is out of order due to debt and worry about getting paid. Money is definitely not going to be the main driver for today’s diary, not by a long chalk. Here are a few comments which  I have found helpful in dealing with filthy lucre. You can of course get a lot of advice elsewhere from excellent sites  so this is very much a summary.

There’s an old song that is called “write  the thought down brother, write the thought down”. There’s nothing worse than having money worries, or any type of worry come to that, whizzing around in your head 24 / 7.

The more we put our heads in the sand, the more complicated the final solution will be. The worry will grow inside the head like a virus the longer we allow the situation to pertain.  The first stage is to make a list of any debt and compare it with your monthly income and savings. Consider getting rid of credit cards altogether???  Don’t wait for the brown envelope. If you have difficulty doing it on your own, at least talk about it with a friend or better still a professional adviser. The Citizens Advice Bureau, historically, are good people to go to but there are many others. Just type into Google ” debt counselling services”. Do not pay fees for any service of this nature.  Genuine services are free.

Actually, the last thing I want to do today is to write about money. For now let us say that you should control your money flow, not the other way around and that’s all I have to say for now.

Today there is so much on in terms of Open Gardens for the public plus a special event this evening that much juggling will be required. Things always work out as they are meant to, so watch for part two of this diary which will appear very much later this evening.