Up, and wanting some things that should be laid ready for my dressing myself I was angry, and one thing after another made my wife give Besse warning to be gone, which the jade, whether out of fear or ill-nature or simplicity I know not, but she took it and asked leave to go forth to look a place, and did, which vexed me to the heart, she being as good a natured wench as ever we shall have, but only forgetful.

None of this nonsense about giving seven days notice then.

Night radio. Radio Five Live keeps me going through the nights as I seldom sleep through. The bedside radio is always on, earphones plugged in. The night programmes are more laid  back than the daytime ones with many callers adding their 2p worth by phone or by text, not to mention Facebook or Twitter.  Early this morning there was an astronomer who interestingly told us that there is no subject more interesting to children than planets and space in general. He said that as a teacher no class was attended by more questions and more curiosity.
Another slot – was it from 2AM to 3AM – concerned all aspects of horticulture. A caller complained that badgers (a protected species) dug up his lawn regularly to feast on the grubs under the grass. Another caller responded by saying an old man had recommended to leave a radio in a plastic bag at night with a talk programme on. Badgers do not like conversations and keep away. I found that funny, but the sleeping form next to me would not have appreciated that tale so I have to keep it to myself until the morning.

Nobody can go back and start a new beginning, but anyone can start today and make a new ending”   Maria Robinson (Author)
I am attracted to the gentle and ‘reconciliatory to self’ tone of this quote. There is no judgement implied. Most of us are far too severe with our own psychology, chiding ourselves on things we did not or could not achieve maybe following reasoning that may have been spurious. The quote is quite pragmatic and does not promise the reader the Garden of Eden, rather making a point about human nature. 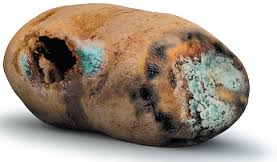 Talking of sacking (not sackcloth and ashes*), we have sackfuls of potatoes stored in our kitchen (nowhere else to put them) and I noticed a smell. We opened them up and laid them n the ground. Some tubers nearly crawled out. An infested tuber can rot in a few days and spreads the stink of decay to its neighbours. All stored potatoes should be regularly inspected.

I was introduced to the idea of No-dig gardens years ago but thought little of it. Yesterday one of our allotmenteers drew my attention to Charles Dowding, an enthusiast and educator of many years standing. I am watching his video as I type. Definitely worth a look for anyone even mildly interested in gardening. I wrote off to him straight away, trusting my intuition as usual, and got a speedy reply inviting us around to his garden in South Somerset. We have an appointment next Monday 18th September.

Off to the Old Down Inn, our favorite local watering hole. Like most establishments there are always new clientele popping in, most of whom are happy to exchange a word or two. No two nights are the same.

In comes a well tanned man and his attractive wife who announced with glee that they had come back this very day from Rhodes in Greece. This was their 12th visit. They had stayed at the same place for the last 8 years. ‘At 10 am this morning it was 37 degrees’ was something we did not want to hear. I commented that they would not really arrive for a couple of days and they should enjoy the ‘bubble of sunshine’ while they could.  I had a lovely lamb moussaka plus a pint of my usual cider and vowed to have a go at increasing my range of cooking main dishes.

When we left at 8pm the sky was black, almost threatening. Oh dear, autumn and then winter are round the corner. We discussed the need to buy logs. I want HEAT, SUN, LONG DAYS.