… her niece came and dined with me to a rare chine of beefe and spent the afternoon very pleasantly all the afternoon, … and then home to supper and to bed, my mind coming to itself in following of my business.

Was Pepys, a busy man and rarely free of suffering in his body, wasting his time when he had a ‘to do’ list more convoluted than most people of his time? For me it is helpful to think of stirring up  earth (‘dirt’ to my USA readers) in a glass of water. It takes time to settle. Gravity and time does it. To settle ourselves we do not have to ‘do’ anything apart from diverting our mind away from the matter in hand. The mind wants to be whole but we must give it half a chance. Also, I do not think you can ever do ‘nothing’.

Today, Saturday, it is cloudy, blowy and spitting with rain. Far from the ideal autumn day we had yesterday as my diary witnessed. My knee continues to trouble me. It is not ‘pain’ as such but ‘discomfort’ as the muscles and tendons try to adjust themselves to my exercises. So, will this be a day when we do ‘nothing?’ Knowing us, probably not (written at 8 am)

The Mendip Times gives a very good summary of ‘What’s On’. As keen as ever not to miss out we saw this event. We don’t know a single soul and it sounds fun.

Prior to that we did our Lidling but and bought our week’s groceries etc. A small weird event happened. We arrived at the check-out and without thinking I said ‘let me guess the amount of the purchases. I hardly looked at them and said off the cuff £53.14. Guess what, it was £53.16. How did I do it. Some sort of subconscious adding machine. Maybe we make better judgements if we do not think.

Anyway at 2.35 pm off we went, not having a clue what was going to happen. We had a choice of 14 events to go to but this one above jumped out at us so as we normally follow our gut we submitted to its silent prompting. Croscombe is a lovely traditional village with quaint winding  streets. 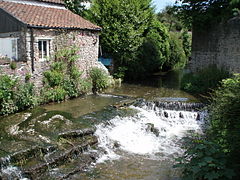 The course of the River Sheppey has been substantially ‘managed’ on its way through Croscombe, as this weir area demonstrates. The Sheppey was the main power source for many of the mills which operated in Croscombe in the 18th and 19th centuries. For those thinking of moving into the area it has a literate and cultured population and is not far from Wells and Shepton Mallet. Expect to pay west of £450,000 for a decent sized traditional house. Even minute 2 bed cottages are £245,000.

Anyway we found the Village Hall. The usual inspection of the notice board took place (you can tell so much about the level of activity from the notices)

The theme of the event was Afternoon Tea @ The Ritz. The aim was to raise money for an expanded bar for which they needed £30,000. We entered and there it was splendidly laid out complete with towers of sandwiches and cakes and miniatures just like the real Ritz. We were not sure where to sit as there were six full tables and four unoccupied. It’s a bit awkward knowing where to go or whether you would be left sitting on your own but after a few moments hesitation we decided to join a couple sitting at the front. We asked if we could join them and they readily acquiesced. As it happened they were a couple who had worked in the army for 35 years on telecommunications which included a spell in Cyprus where I had also lived. Alan the husband specialised in writing scripts for Christmas Pantomimes.

We had plenty to talk about so off we went. I was unable to resist digging in to the food. Tea and coffee came around served by two immaculately dressed sisters who were so proud of what they were doing.  Well done parents. Sheila Ross, the grande dame of musical arrangement in the area played background music on the electronic piano.

After about an hour we had a splendid talk by Jim Scott, announced in grand style by the compare, Mike Dowell.

Jim the speaker is a world wide traveler and sailor, an ex-navy man who used this occasion to tell stories and read some of his poems from his books. I recorded them as videos and here they are. They are all about 2 minutes in length. First poem, second poem, third poem, forth poem.

Jim’s children live on the British Virgin Islands, now a virtual wreck after the hurricane (tornado) and he has formed a charity at great speed from nothing in a few weeks to encourage people to support the rebuilding. If you want to see his website here it is. Well done for getting so many notable people on board so quickly.

Anyway he shared his travel experiences from all over the world. Jim said that his cat always knew when an earthquake was coming for he went under the settee dragging a pillow with him. He and I had both lived in South Africa so I prompted a few quote and stories from him, to the entertainment of all. I noticed that many of the 30 people in the hall were too shy to ask questions. Francoise thought that this was because they had not traveled much.

We agreed that the most exciting thing about travel was the unexpected, particularly meeting friends completely out of context and by ‘coincidence’. He said he had been planning to go to Australia but never made it as he got shipwrecked on the way. I like these people. He said he would not return to most of the places he had been not because they were disappointing but because he had an insatiable desire for new things.

After the talk we chatted with our table friends and I arranged to see Alan’s band playing at the local pub in Burton Bradstock, Dorset.

So the lessons learned for us anyway