After being at the office all the morning, I home and dined, and taking leave of my wife with my mind not a little troubled how she would look after herself or house in my absence, especially, too, leaving a considerable sum of money in the office, I by coach to the Red Lyon in Aldersgate Street, and there, by agreement, met W. Joyce and Tom Trice, and mounted, I upon a very fine mare that Sir W. Warren helps me to, and so very merrily rode till it was very darke, I leading the way through the darke to Welling, …. (of a friend) He says the hand of God is much to be seen; that all his children are in good condition enough as to estate, and that their relations that betrayed their family are all now either hanged or very miserable.

For a full reading of Pepys diary you need to click on the date at the top where the full exposition will be revealed. I take something to inspire me and extrapolate it using my daily experience. 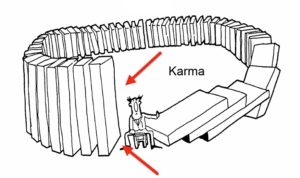 I was struck by the last sentence about miscreants being either hanged or very miserable. ‘As you sow, so shall you reap’ is the rule here.  Depak Chopra has had a go at giving guidance but in the meantime this diagram is a clue

I have forsaken my monthly Men’s Breakfast meeting to go to Bath for the final day of the workshops about which I have written. The title today was ‘Moving Stories’ – our bodies have a story to tell. With movement, meditation and art work. Francoise decided to come with me.

I discovered that Clive, one member of the writing group, had persuaded his wife to come by telling her it was a shopping trip. She did not seem to mind and I guess was used to having surprises. There were more of us, a total of 11. Our facilitator Catherine was an art tutor and also a movement therapist.

After introductions we received an outline of the session, not necessary in my view. If we trust the situation enough to come along then we trust the presenter to guide us correctly through the process.

We were asked to draw the effect of a brief meditation on either a blank sheet of paper or on a format of an outline of a body. We then went into the adjoining room for some stretching and loosening up exercises. After that someone innovative. We had to make a movement which said something – a raising of the arm, a twirl, a stamping of the feet, any movement or action that we felt relevant to how we were feeling. One person squatted on the floor. Another did a Kung Fu Fighting lance-like movement of the arms.

We then went into the original room and did a 15 minute meditation in which we focused on parts of the body, starting at the feet. After a pause we were asked to do another drawing either using the same piece of paper or another, to show how we felt after the work.

We were asked to make a comment on our drawing, with particular reference to before and after the meditation and other group exercises. Clive responded in the form of a poem which he had written during the time given to work on the paintings.

Autumn colours redolent in parks and verges
Unseasonably warm and dry – almost temperate
Will winter ever return to Bath?
Soft bells peaking in the distance
Music cascading from classical guitar
Tinkling from the abbey square
Visitors searching streets for Roman influence
Pre – Georgian Bath evident in the leaded windows
No sign of springs or acorns or hogs any more
The motor car and the train have forced the layout
and architects have forced a facade.

Various people chimed in and gave their views of the session. There was an exceptionally high level of trust, with the result that we were able to be ‘just us’, we all felt that we had supported each other without conscious intention, just by focus and listening to other people and giving them space.

The course leader was too politically correct (PC = dreadful pre-programming) for my liking, and kept on asking us if it was all right to do this or do that, or telling us that we could stop participating at any time, and that should respect others’ space.  That would have been fine in the 1990’s when people were naive about group work, but now we are quite sophisticated and do not need to be ‘told’ the rules. Had the session gone on for much longer I would have ‘come to blows’ with her in the nicest possible way but she was starting to grate.  However I grumble not because we all got a lot out of it and she did make the space for us to bring out what we felt, and she was adaptable to our preferences. Basically I think in such situations you get what you need to get out of them but only if you are ready.

Furthermore we felt that the total number in the room, 11, was jut right and if there had been a few more people the intimate atmosphere would have been compromised.

The project organiser said that it was a great relief to her to get out and about as a participant instead of an administrator and that she felt so energised and refreshed. So, everybody benefited. That’s what I call a ‘result’.

Funding for this venture will hopefully continue after next April.  Virgin have a part in it, good for them. It is clearly far-sighted ‘prevention is better than cure’ stuff, and if we can encourage people to retain the will to  communicate and their social relationships to thrive then bills will be saved on therapy, breakdowns and most of all, reliance on these wonderful brain altering chemical poison tablets that are called ‘medication’.
DID YOU KNOW <stun horror shock> that doctors made more than 64 million prescriptions in 2016 so that’s about 1 per person. Interesting that the highest proportion are along the east coast, Norfolk and Suffolk, The Wash, Tyneside – (Newcastle Upon Tyne) and Blackpool. Compare this with 9 million in 1991 and 47 million in 2012

Off to Jimmy’s for lunch. As is the case with ‘all you can eat’ buffets at the weekend, prices are higher but the food range is greater. This establishment is very accommodating. We had crowds of children coming in who apparently seemed to be on their own. They just wanted a sweet course and shouted and jostled round excitedly but were well behaved. It is good to see children being introduced to such situations and learning how to behave. As a child I was never taken to restaurants, and the first time I saw my father drink in a pub was when I was 22 years of age, in the Lake District if I recall. He had an apple juice. My father was a vicar (C of E) and he did not know how to relax though my goodness he tried.

And now on our walkabout on a pleasant enough autumn day. Saturday being Saturday the crowds were out. Entertainers abound and the local council tolerate them even encourage them as they keep the tourists amused. By the way, Bath is on the tourist ticket due to its architecture, the Baths themselves and the ease of getting from London. London > Stonehenge > Bath then on somewhere else overnight. Japanese are to  be seen in abundance, plus noisy crowds of youngsters from Italy and France and the odd tourist from USA or Oz holding their maps upside down.

This chap (you cant see him) was working the crowds outside Primark by climbing up a  pole and hanging on with his legs. He spun it out so much that people cheered and whooped. EG “Who wants to see something dangerous? Say YES”. They dutifully did.

On my ‘to do’ list is the artistically created Van Gough film, ‘Loving Vincent’ and I popped into the Little Theatre, actually converted to a movie house usage from a theatre, to enquire about it’s availability. The lady in the coffee bar said that they had many requests but it was  a question of getting confirmation from The Powers That Be. This is the nearest arts cinema to our base that we have. The other one is the Watershed in Bristol. I go to both as often as I can.

The rest of this afternoon walkabout can be found in part 2. Scroll up on this page and click on the diary entry above this one.