We did a job today consisting of trimming a very tall hedge. It is a variety that is very difficult to cut even with an electric hedge trimmer. The hedge was also on a slope which makes ladder placement a challenging task. 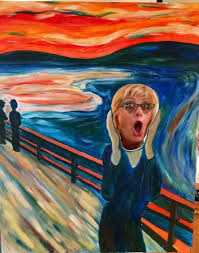 We greeted the lady – I would say she is about 75 – and she responded in a flat voice before returning indoors to her house.  We worked away for 2.5 hours and did not stop. Unusually, no offers of tea were forthcoming. I knocked on the door at the end and asked her to come round to view. We cannot remember such a lack of anything resembling emotion, never mind a ‘thank you’ or a ‘that looks nice’. We did a very good job, one of our best, but we were greeted with a blank look, and a hand with a cheque attached to it.

I noticed that during the job I could barely drag myself around. I felt heavy and really wanted to  be somewhere else. Normally the job feeds me with energy and at the end of even a long job I feel invigorated. Not so this time. Although the garden ‘looked’ good enough it was like working in a grave yard.

We thought afterwards that the customer was on anti depressant drugs. Funny how they make you more depressed and do not deliver the joy and freedom that some expect. How sad that so many people turn away from attempts to get them involved in society. Is it self pity?