How many of us can find the time or the inclination to write about what we have done. It may well be of interest to those we know, so I regard this as part of being a friend – even though the communication has not been asked for. 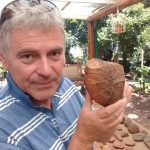 Michael Tellinger, a South African author and archaeological researcher  started the Ubuntu contibutionist movement about 12 years ago. No, Ubuntu is not a software platform but the idea that a better quality of life can be obtained when people share resources and offer some of their time free of charge so that all can benefit.

I don’t expect you all to be interested in a topic that may not interest you but this diary is offered as a role model on the IDEA that in this day and age of sound bites, people might appreciate receiving an impression of an event, occasion or pastime in written form. Videos and E-mail make us lazy or should I say encourage laziness.

The Town Hall was full with the best part of 150 people there, the sort of crowd you would expect from Glastonbury; the sense of community among the supporters was tangible.

I went to greet Michael beforehand and he was very civil and positive to me, he looks very good and full of beans. He emphasized that he wanted to step down from running and focus on what he really needs to be doing – tours and so forth.

I find his presenting style good and lively and I was able to listen to him i.e. he held my attention for the best part of three hours. At the break some people did not return. This may habe been due to the lateness of the hour and difficulties with transport and so on.

He does cover an awful lot of ground and like David Icke he said that most of what we are told it is a lie and gave some good examples. I am not sure how much he would appeal to the general public because most of the time he was preaching to the choir as we say.

He gave one piece of evidence to show that the moon was a holograph. That was maybe one step too far. I have learned that it was an artificial object brought into the orbit of the Earth for certain reasons but I know that when objects are crashed into it, a ringing sound goes on for 20 min. or so. I don’t know how you crash into a holograph and how it would ring.

The archaeological points he made were very interesting with giants roaming the earth, millions of statues and so on and there’s no question that he should be spending his time on this. He has the ability to dig out great quote for this ‘alternative view’ of the universe including the importance of sound frequency and the interplay with light and matter.

The whole was a bit like giving us 50 taster dishes without the opportunity to digest the food, fair enough, that’s all he had time for but I think that fewer themes developed to a greater extent would have been more valuable.

We ended shortly after 10 o’clock. There was polite applause but then again Glastonbury people have heard it all, it is after all another planet ha ha.

I’m very glad I attended and we met Camilla who spoke to my partner Francoise preceding the talk.

We all have a role in this universe and it’s up to us to help each other to find out what that role is and stick to it and not to try to take on too much. I’m a fine one to say this because I do the same such is my enthusiasm but I think we all have to discipline ourselves and be realistic when all said and done.

There are not brownie points for running ourselves into the ground.