Stomach acid is strong. It has to be. However, when it goes to places that it should not go, then heartburn is caused. Such is life that I have to suddenly conform to a strict diet, halve the amount of food I eat, and generally discipline myself. After many years this is so difficult. This evening I went to our local garden club’s annual Christmas party and had an innocuous mixture of salad, cheese scones, sausage rolls, half a glass of punch, some delicious trifles and cakes.  Lovely at the time but such a bad idea. After a certain stage no matter how much Andrews Liver salts or alkaline substances you take the pain continues with much vomiting.

Compare this with a programme I watched this evening on TV about Leticia, one of three daughters of the Prince of the UAE who had tried twice to escape from the gilded cage existence. The first time she was recaptured and beaten, held in a completely dark room for weeks at a time and held in solitary confinement for 3.5 years.  The second time she escaped by arrangement and nearly reached India by sea when she was intercepted by UAE guards and taken back to UAE . Since then nothing has been heard of her.  Against that my suffering is about 1% and could be seen as a minor inconvenience. The worst thing is when you lose control over your life and have in effect a prison sentence without end. I think I would go barmy (mad) in this situation.

My readers will recall that I wrote about the fake forest fires in Northern California. Here is another image, this time showing molten metal from car engines forming a rivulet down the street. To do this would require temperatures of 3000 degrees C – forest fires are about 800 degrees. See the increasing number of videos that are appearing on Youtube and other places. Basically the official news is 100% fake. It was directed energy weaponry, lasers to be precise. No wonder people don’t trust the media. 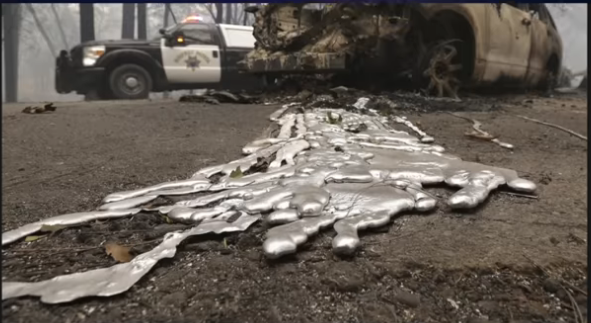