We packed all our stuff and said goodbye to our host. This time for reasons of speed we took a Northern line tube from Chalk farm station via Euston to Pimlico on the Victoria line and from there a short walk to Tate Britain, cases rumbling as we walked along the street.

As we are Tate members, we take delight in going to the members restaurant. It has delightful views over the River Thames. We were glad to have been offered the best seat in the house by two very nice ladies to drink coffee and a wonderful French croissant. If there are any Tate members reading this, a new coffee bar will be built in the members room because there was originally one queue in the adjoining room for food and coffee; people had to wait 45 minutes just to get a coffee so a separate tea and coffee area has been created. It should be finished at the end of March 2019.

Off to our main reason for coming to Tate Britain, the Don McCullin  blockbuster photographic exhibition. My goodness, was it popular. We had arrived at about 11 o’clock on a Sunday morning, only an hour after the opening of the gallery and already people were queueing to get in. 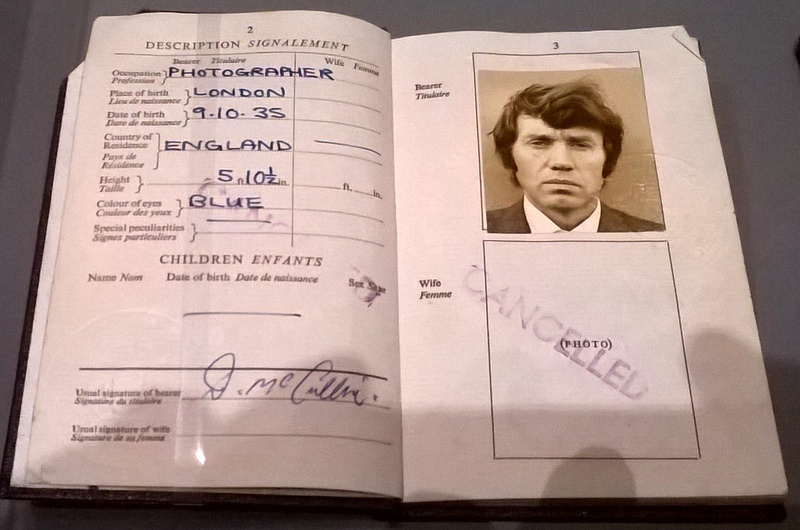 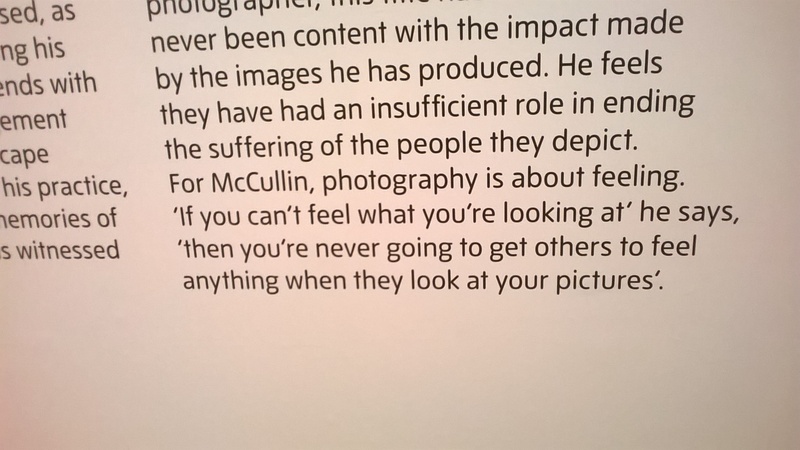 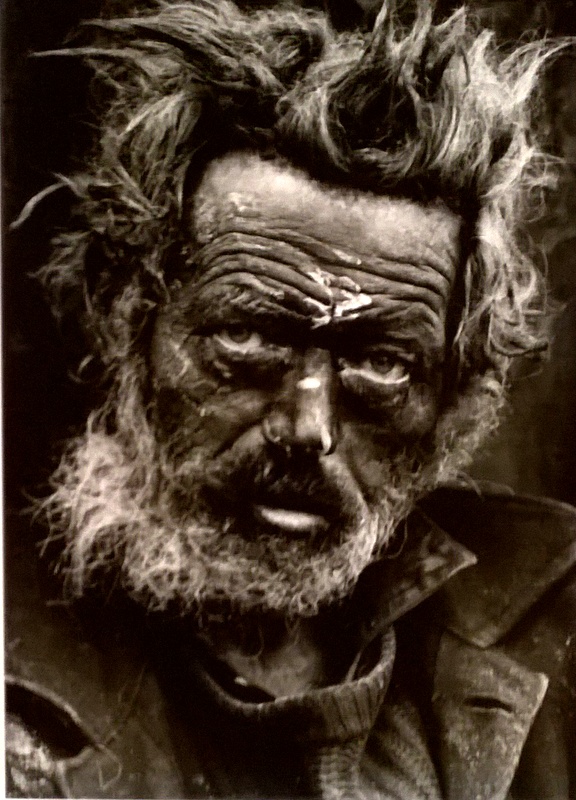 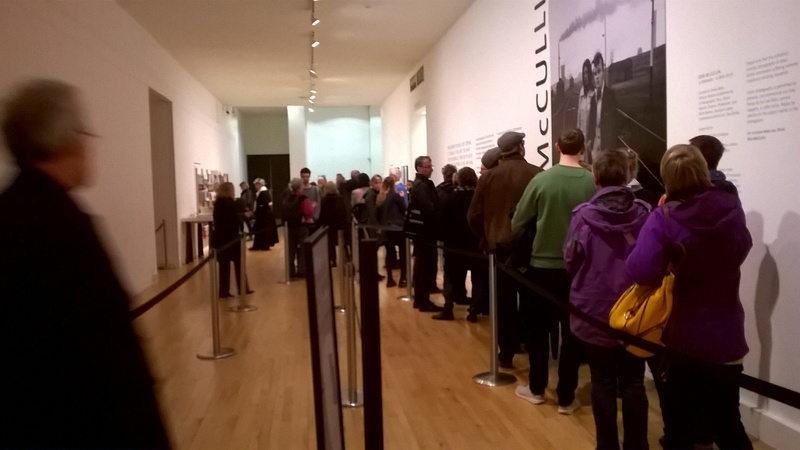 people waiting to get into the exhibition. 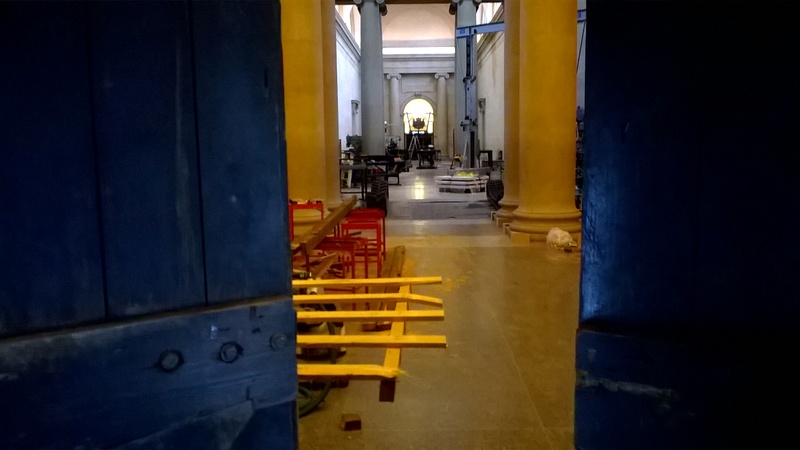 An insight into the central area of Tate Britain between exhibitions 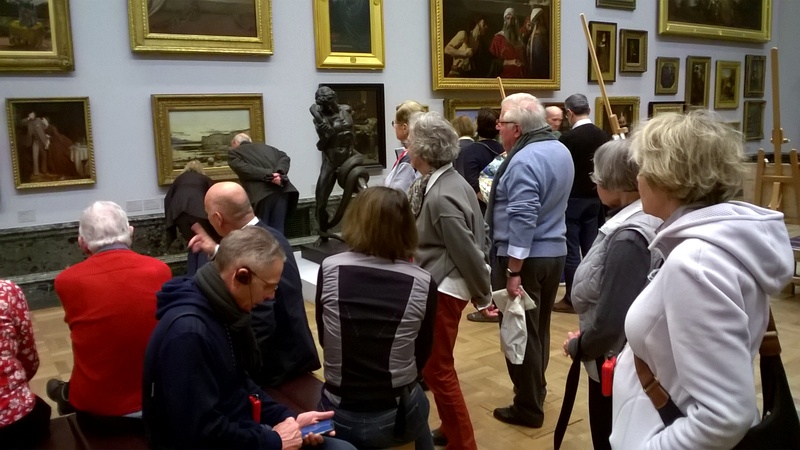 People in a group looking very interested in something 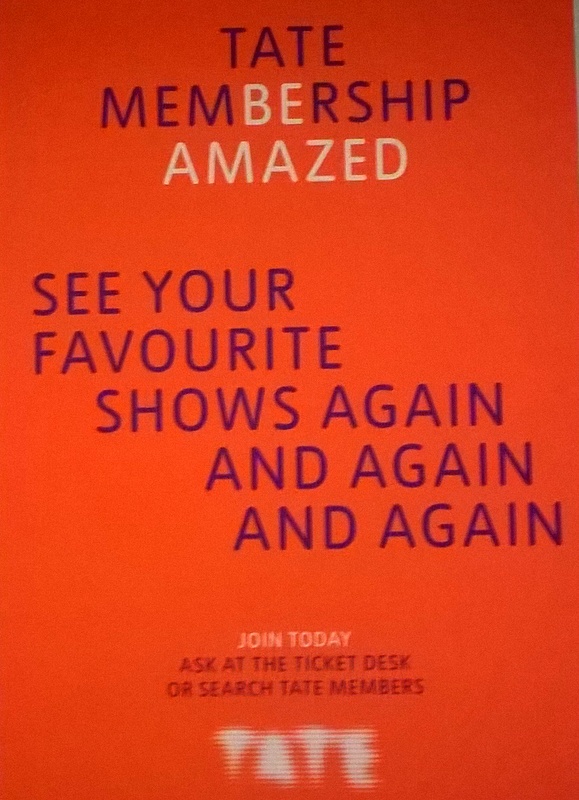 a very clever ad to convince people to become members. We are joint members. It costs us £120 a year. It is worth every penny even though we don’t live in London we more than cover the cost on two visits. You also get a monthly magazine and a notification of what’s going on.

Oh, I nearly forgot. There was a cinema type area showing all the front covers that this photographer had appeared on throughout the years. I found the refresh rate of the images far too fast. You could just about take it in when there was one image shown but when there were three images shown you could scarcely focus on the three before the image was changed.  I think the refresh rate was about five seconds and I think it could have been seven seconds which would have made a lot of difference. I felt it was a bit of a slight to the photographer to show his work to briefly to be digested.

I did complain to management that they were frankly overworked and geared to apologising to people. I said I am not interested in apology just a correction of a technical factor of this brilliant exhibition and I think I was wasting my time. When I get round to it I would at least write a letter to the gallery about the refresh rate but it’s not at the top of my to-do list.

To Victoria Coach Station. We normally walk there from Tate Britain carrying all our luggage. It takes about 20 minutes. We arrived 1 1/2 hours before the 2:30 PM bus which we had booked but there was another bus going to Bath at 1:30 so I waited until everyone had got on and asked the driver if he could squeeze us on. He was happy to do this. However, if we had missed our bus is questionable whether we could have got on the next one.

We drove through a comparatively deserted Kensington and Chelsea then Hammersmith, via Heathrow airport to Bath, arriving at 4:32 PM, two minutes after the scheduled arrival time. I thought to myself rather smugly that this is better than many trains and we are paying about a third of the price.

Straight onto the local bus to find that our humble dwelling is still standing, and why should it not, but it’s always nice to see. We always unpack quick as a flash, and start the fire and of course a nice cup of tea. See how British we are rarely although one of us is French.

To bus station with a ticket for the 2:30 PM. We got on the 1:30 PM because there was spare room. The driver was able to release our ticket to sell to someone else on the 230.

Pass through teeming rain. We left Tate Britain at 12:30 PM and arrived in Bath at 4:30 PM