There have not been enough events of note in the last few days to stimulate me to make any diary  entries. Yesterday I finished the job that was truly ‘jungle clearance’.  There was about 4 yd.³ of green spoil (see image below)  and all sorts of odds and ends including eight footballs hiding in the long grass which resulted from leaving a garden neglected for the best part of seven years.  My good friends from ARK clearance came along and took it away. We figured that the elderly house owner, who was born in the same house, could not face the passing of his father and simply blotted the garden out of his mind. The father was a great fan of the garden and tended it with loving care.

Anyway, this morning I decided to go to Wetherspoon’s to have breakfast; five pounds for a traditional breakfast including a coffee. I started my meal and I noticed a commotion at the stall next to me. The next thing that happened that William Rees Mogg introduced itself to me by name. I was slightly taken aback to see him – never mind been greeted by him. I reminded him that I had been to see him twice about 5G. He not only recalled the conversation but also the time and the place. This man has a formidable memory.  Afterwards, I joked with his agent about the stupidity and hypocrisy  of Greta Thunberg and the leftist agenda of the BBC. That really made my day.

My food allergies are getting worse. So I decided to find a specialist, one of whom lives in the Frome area and by luck I got an appointment this afternoon at 3:15 PM

We are preparing ourselves for a week in Cornwall. Rain is forecast for 50% of the time but then weather in this area is different from the rest of the country and I’m sure will have a lovely time whatever the sun decides to do.  I must dig out my waterproofs and my wellies.

Off to Frome to have an allergy test with a lady called Helle Jones who has been doing allergy testing for 37 years.  However on the way I popped in to my local garden equipment suppliers. My petrol strimmer was becoming a nuisance as of 10 min work the cord broke off so I had to thread it again. Mike, the ever accommodating owner, explained that I must use it slowly and at some distance from the offending brambles. He told me that if I move it too fast back and forth it is too much for the cord. Grateful for his advice, I continued my journey to Frome.

The allergy test told me that I must not eat six types of food. I was wrong in all my guesstimates except one. Coffee is bad for me but I can have  decaffeinated coffee. I thought it was the milk, not suspecting the coffee  for one moment. It was right in front of my eyes. The machine she used was called the Vegetest which can diagnose the cause of symptoms and indicate the correct therapy.  I suspect it is designed on radionic and acupuncture principles.

I was rewarded with a lovely rainbow following a rain shower. 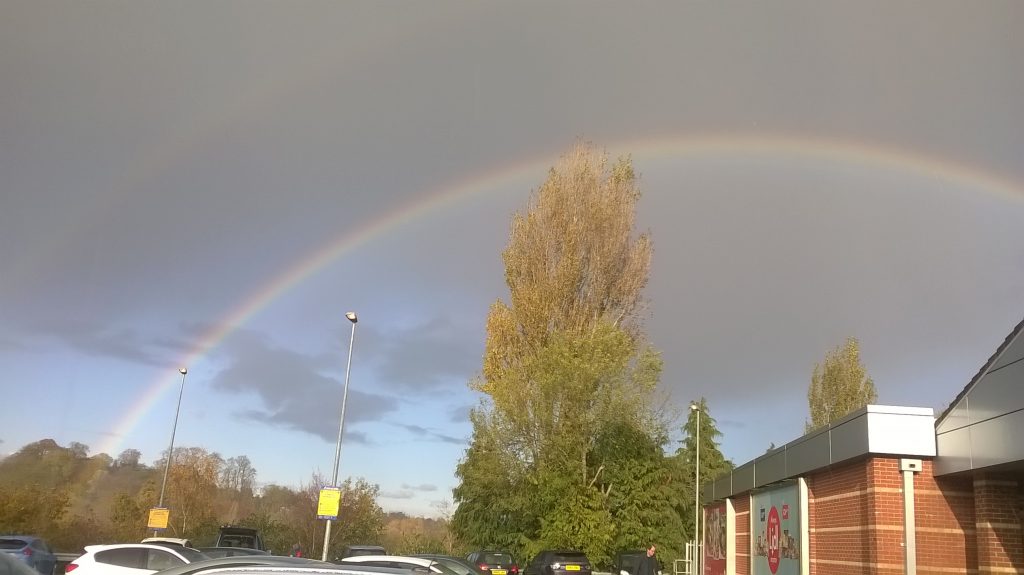