I rose early this morning to deal with correspondence and to focus on those emails that I promised to attend to. I can say that my study work is never boring. On the world trends side, it is not only the Club of Rome but many other organisations throughout the world including Planned Parenthood that are eugenicists.  The Club of Rome think that the biggest danger to mankind is, guess what, mankind.

I was listening to a program last night about the 80% of pay that self-employed people will receive, those who have been in business for three years that is.  The problem is they won’t get the money until at least June when I hope this nonsense will be over.  It appears that many flu-like diseases are being ascribed to the coronavirus so the statistics are suspicious to say the least. Oh and what about supply teachers. How are they going to eat.

A lady wrote to me – or rather I was part of a circular – asking people to pay attention to an important matter. Her words were

” I continue to forward these links for one reason only. To hope that by reading them we will awaken to the evil that is being perpetrated upon us. I can’t make you wake up. I can but long that you do.  That the majority of you will not read the article, or dismiss it if you do, if just one person does, I say Allelulia.  The evil goes back a long time.  If we are ‘happy’ to be controlled then we need do nothing. Just continue to isolate ourselves and submit to vaccinations and the fear virus.  I long and pray for a world of health, harmony and beauty.  What would Jesus have done?
With my love always.  And to our beautiful young and precious children and young people”

I wrote back saying

Very true, and yet there is always the possibility to awaken to faith.
I wish you very well Brian.  How do the slumbering wake?
And 90% will be happy to be ‘looked’ after from cradle to grave.

So, the question is what do we believe in?  Where do we get our belief system from.  The Internet is definitely a mixed blessing. There are a few people who care about truth.  There are normally academics or retired people who don’t have to make a point but are just interested in truth for troops sake.  The majority of people do not take the time to look at both sides of a question.  They seek out their preferred information, even though its source is questionable, and take refuge in it.  This is still the case when people get a breakthrough, it could be of a spiritual nature, and believe that they have discovered “THE TRUTH”.  They think that the truth should be obvious to everybody else and if their friends don’t follow the truth there is something wrong with them.

We need to be in a state of mind that what is true today may not be true tomorrow or may be shown to be false by some further truth that comes along.  I’m not talking about absolute truth for example the power of love or the value of companionship I’m talking about a political stance.  Social media is again a mixed blessing.  People come along with all sorts of chips on their shoulders and present their own version of reality as if it were fact.  I am more inclined to believe something if it can be historically proved to be true or if I get the same thing from a number of sources that I trust.

Everyone needs to bear in mind one fundamental problem with seeing things as they are.  This is somewhat simplistic but there are two worlds.  If you see the planet as a Corporation that will help.  The powers that be behind-the-scenes, and they are there, are attempting to control the world and will so in due course unless we stop them.  If you want to do a search on New World Order, Agenda 21, agenda 30 you will answer the question.  The second information stream is what the public is deemed to need to know.  I often describe it as the crumbs from the table.  The MSM or mainstream media is complicit in this.  The people who run this world have if I can put it delicately a different set of qualities to the normal human being.  I think we’ll leave it at that for the moment.

To Sainsbury’s for provisions.  What do I find?  A long queue of people standing at 2 m intervals.  The policy seems to be one in one out. It will take me at least half an hour to get in so being impatient, off to Westfield and the local butchers where the queue is shorter, three people, but I get what I want and double up just in case.  I understand the queue for Lidl was reaching down to the high Street. That means a line 50 m long. I visited again later in the day and the queue was still there. I visited the Co-op and there were no queues.

Let us just think about this rule that people have to stand 2 m apart.  It’s the daftest thing I’ve ever heard.  What if there is a wind?  You could stand 6 m away from someone and if you were downwind of their sneeze you would get contaminated.  I find the whole thing ill thought-out.

Today the local newspaper, the Journal, has paused publication. The staff are in self isolation and the people who deliver the magazine are indisposed so the editor had to circulate it herself. Advertisers are hesitating fearing lack of response (quite rightly so)    Too much against….. they will be back.

We received a telephone call today, my first gardening job of the year.  It’s a very nice lady called Mrs Found.  I will refrain from making jokes. She is a lady of the old school, obviously a widow, but with a lovely garden and my job will be to clean the paving. I have never found two paving stones that are the same.  Every stone, artificial or otherwise, ages in a different way and is affected by overhanging trees.  I should be doing that tomorrow Saturday and that will be the way of paying my council tax which is due on 1 April

My travel company, Broadway Travel, bowed to the inevitable and gave us a credit note on a weeks holiday that we had booked in mid April to the Canary Islands.  I really do hope the travel and the airline industry recover from this assault on their economics.

Francoise and I had a Skype chat with my son mark, his wife Nidhi and her parents who are visiting them in Krabi, Thailand. There is a lock-down there also, so only takeaway food is available. 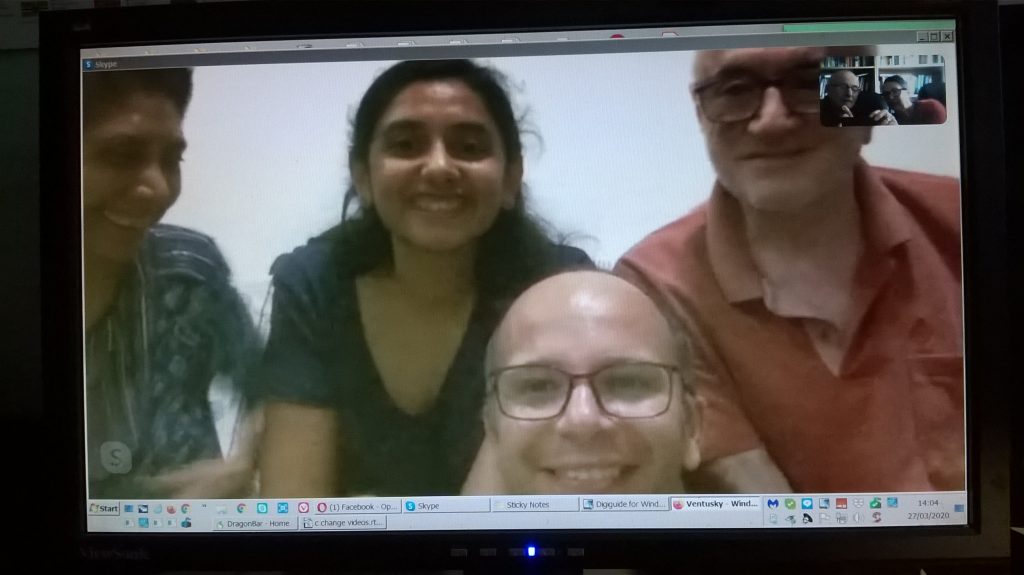 He is doing his teaching via the Internet and seems to be doing well enough. The parents said it would be nice if we could all meet in Thailand at some point.
Corona hand washing hand washing sing happy birthday more corona.
I turn to TV for relief.