…on the bus with my other half to Bath hospital. Today was a day that I had not been looking forward to for some time. Endoscopy is when you put a camera down your throat and have a look at the stomach and see if there are any holes or anomalies. Last time I did it was in October and it was a failure. I was given three times the dose of Midazolam which was supposed to calm me down but I pulled the camera out three times and the experiment was abandoned. I felt bad about it but again my gag reaction is strong and I can’t do anything about it. 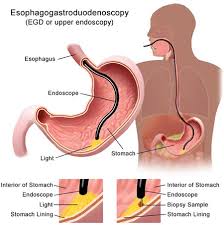 Anyway, this time they tried another method which was a strong throat spray which pretty much anaesthetises the throat but you can still feel the tube going down. Mr Krysztopik the consultant  moved the camera on its lead very slowly down the throat but when it hits the back of the throat you do gag and this is a natural reaction. What really helps is that a nurse holds your head and gives great comfort and I felt like being a baby again.

The procedure took about 4 min and they took biopsies, little pieces of tissue, to see if there was anything abnormal. The way they do this is to feed a wire which looks like a corkscrew down the camera lead and twiddle it around.  I must give a consultant great credit for spending longer talking to me about what was going to happen than actually doing the intervention. He said exactly when the discomfort would happen and that the camera lead would feel like a lead pipe which it did and that I must not worry about gagging which is a natural reaction for the body to get rid of things. The nurse told me to breathe and she was actually right. it is comforting to realise that these people have done this intervention thousands of times and they know exactly what to do, including when things go wrong.

it was found that the gastro-oesphageal flap valve showed a Hill classification value three of which is moderate. That means that stomach acid keeps on coming up. it also means that I have to stay on my omrazeprole pills, so far as I can gather indefinitely. I just have a flappy valve and that’s all there is to it so if that’s the greatest defect in my body then that is something to be thankful for.

I found I was shaking at the end of the intervention but the shaking soon passed and I walked out about 5 min later back to my wife who had patiently waited the best part of an hour. I was told to drink some water in half an hour and if it repeated on me to wait some time and try again. What I actually did was to go along to a cafe and have a  latte, chocolate cake and some ice cream. I had a slight soreness in my throat but this did not detract from the pleasure of giving myself a reward.

I realise that I had more anxiety prior to the intervention than I would have cared to admit. It is like a dark cloud on the horizon because you never know what’s going to happen. it is not a very small version of being found guilty of a crime in having to appear in court in six months time. It never leaves you and you imagine what could happen for the good or for the bad.  I’m not so sure what can be done about this, perhaps I have a weak character or perhaps it’s just human nature to worry about things that are potentially life-threatening. I wonder what it’s like to work for medicine sans Frontiers. Now that’s traumatic if ever there was one.