Slept well all night and lay long, then rose and wrote my letter to my father about Pall, as we had resolved last night. So to dinner and then to the office, finding myself better than I was, and making a little water, but not yet breaking any great store of wind, which I wonder at, for I cannot be well till I do do it. After office home and to supper and with good ease to bed, and endeavoured to tie my hands that I might not lay them out of bed, by which I believe I have got cold, but I could not endure it.

We planned to go back to the Tate Modern where you can spend at least a day walking round the galleries now that it has doubled in size. there are two or three chargable temporary exhibitions but, visitor be assured, there is plenty of free stuff to keep you more than entertainment.   Again I make my point, here is a group of seven or eight-year-old children in their high-viz jackets chatting excitedly to each other going in to an exhibition by Alberto Giacometti. how they can get any benefit out of it apart from the gratification of the ego of their helicopter parents, beats me.  This artist or should I say sculptor is difficult to understand at the best of times and I did not see any evidence of the children having the works explained to them. Apart from ticking boxes, will someone please tell me what the point is.

Anyway I was getting some heart palpitations and was feeling a bit queasy so I thought that a trip to King’s College Hospital in South London would be appropriate.  The Outpatients Department of any hospital is not the most relaxed place and it cannot be by its nature. There is refurbishment going on at the moment so the whole thing has a temporary feel.  there are three stages. You have to stand in a line and talk to a nurse who decides roughly what category your problem falls into.  stage two is getting registered and making sure that all your personal details are correct and then stage three is when you sit in the general waiting-room, sometimes for a long time, for the attention you require.

From the view of the people sitting waiting, it looks like there is one queue, but in fact there is a classification depending on the type of problem.  My problem was a suspected heart condition and that is treated in a different way by different group of people. The NHS has set a standard of four hour waiting time and when you consider all the things that have to be done in that time I think that is quite realistic. For example if a patient comes in by ambulance who needs the immediate attention of 5 to 6 people and they have to be taken off their ‘non-urgent’ work to probably save the life of somebody else.

Most people are very philosophical and patient but they’re always one or two  while tending towards mental instability for reasons that we shall never know. One woman could not bear the idea of queueing up for anything and started shouting at the staff and accusing them of being lazy and unproductive. She obviously had had a chip on her shoulder for most of her life and anyone in authority was like a red rag to a bull.  The staff are used to this and accept this as part of their work. Nevertheless, there are Hospital security people, if I may say this of ample dimensions, who will appear at very short notice if they are required as we saw on one occasion.

I witnessed an unpleasant sight when I went along to the pharmacy to collect my medicaments.  There was a rather sour faced woman there pushing a child in a pram. She had plainly been very inconvenienced by the wait,  and told the harassed Chinese dispenser that the system was inefficient and they should not claim a waiting time of 16 min instead of the half and now that she had had to wait.   Had she taken the trouble to listen, she would have known that the automated system for delivering the medicines had broken down and they were not able to dispense anything.  It was just plain superior nastiness and abuse. The remaining people breathed a sigh of relief and rolled our eyes when she left. I never blame the person who is trying to do their best behind the counter. I always make light of the event and engage the other people in positive conversation and it always works (well, nearly always).

In spite of all this apparent mayhem, the standards are very high and they did not let me go until they were satisfied that I was out of danger.  I got a written discharge report and after lying in a recovery ward was offered fish and chips which I accepted with alacrity.  I entered the hospital at about 2 PM and left it about 9:15 PM.  I tell anyone who complains about waiting that they should try p 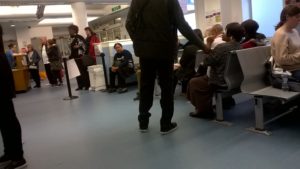 rivate treatment and take their credit cards because they will need them.  I don’t think we realise how lucky we are to have such a system and I wish the so-called Health Minister would actually wake up and show a little bit of empathy for those in his charge. My impression is that he’s waiting for the system to crack in order that American Corporations can infiltrate yet another aspect of our life.  I have complete contempt for these money-based people who see the human being as a cash machine.