So there they were, these glasses of bubbly, full to the brim and laid out in a rather seductive manner. How could I resist? I had a glass of Prosecco for £3 served by two delightful ladies which set me up for the afternoon.

The village of Pri 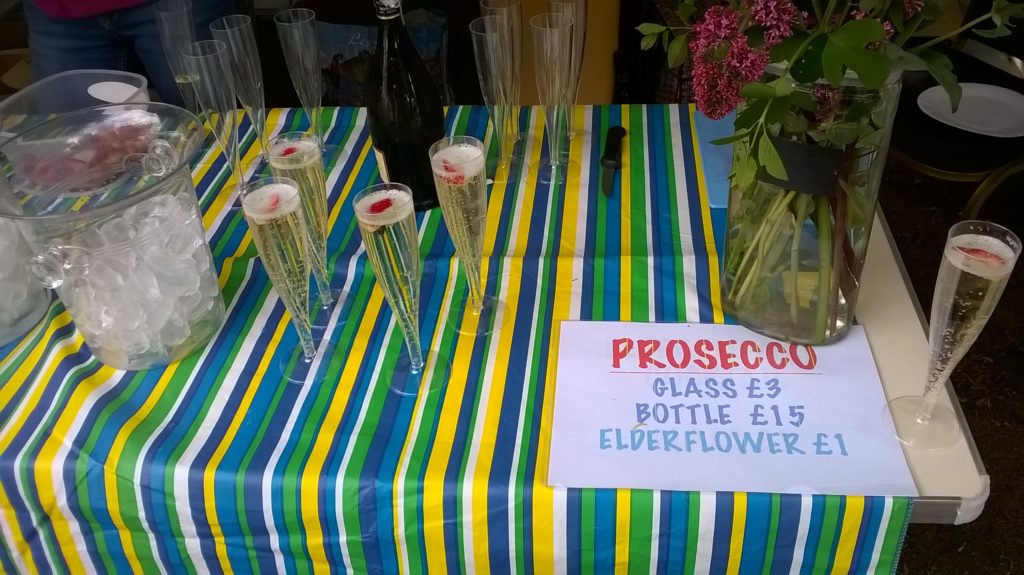 ston has a population which at the last official count is listed as 232 souls, but today I saw at least three times that due to the attraction of the May Day Festival which is held annually on, guess when, May 1st. 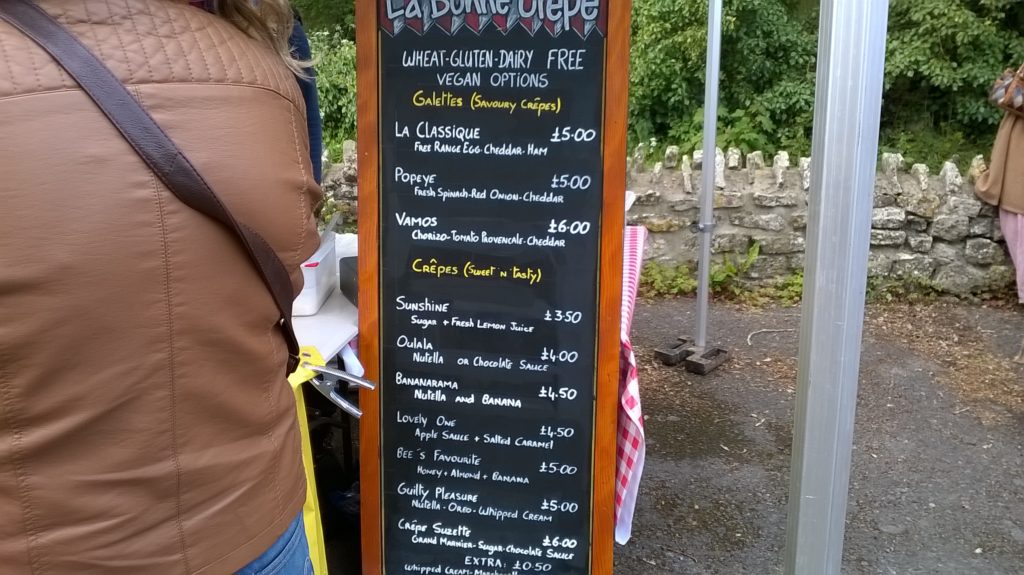 There was a stall selling crêpes which to my mind was the most doubtful value of all. I have enclosed a price list which you see. The owner was just making a layer of flour and milk as you do and putting a dusting of various ingredients, for example Nutella, and charging £4. I would say the value of ingredients was about £0.30. Maybe he gave the profits to the Village Hall so I will maintain an open stance towards this.

On the other hand there was an amazing collection of cakes and scones in the village hall. I was so greedy I had two cakes both of which were delicious, and were home made by the local ladies. The cost was £2 for a generous slice of cake and scones. I had two cakes. 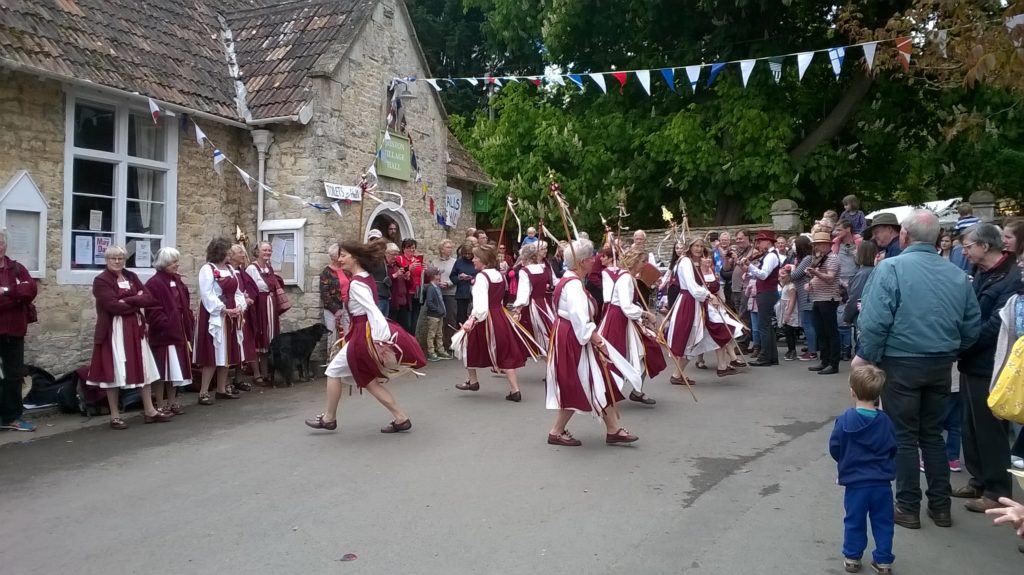 There was enthusiastic and varied Morris and Maypole dancing plus the local Radstock Brass Band who played a series of upbeat numbers.

I don’t think they get paid anything for this so well done for turning out in all weathers, sometimes travelling distances but always in the service of the community.

I spotted Jacob Rees-Mogg MP for North East Somerset who is going to be out of a job on 5 May when Parliament dissolves in time for the election on 8 June.

There was a splendid lady who went around selling ice creams with a sign round her neck a bit like a bib. She was very charming and personable and I hope she eventually sold a lot of product. 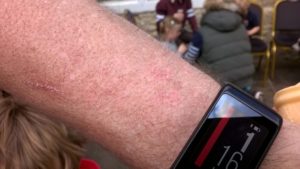 I had a chat with a man who had a strange elongated watch, which turned out to be a Garmin HealthWatch, it is called a Vivosmart HR+ with GPS activity tracker. It does everything except make tea.

It registers the number of steps you’ve made during the day, your pulse rate, in fact any type of physical activity. It has an inbuilt GPS which tracks distance and pace while at the same time mapping your progress. The man only bought this gadget a couple of weeks ago but he’s very excited about it like a kid with a new toy.

This event was the best example of a free and easy experience where quite frankly you could to stop and talk to anyone, say outrageous things, and nobody minds. It is pleasant to be in the company of intelligent and well educated people. For a start they know how to behave and there is a level of acuity and awareness in the atmosphere which I appreciate and in which cocoon I feel at home.

Today dawns a bright sunny morning and Other Half and I are off to a Mayday event in Priston which is a small historical village about 6 miles from here. I would be even happier if it was warmer with less threat of rain but hey this is England. It is notable that some small villages are very well served from the communications point of view due to the literacy and sophistication of the people who live there. Awareness of the wider world is correlated to the activity in the neocortex and although intellect is not just ‘of the left brain’, such cerebral activity and a good dose of self-discipline certainly helps. The link above shows the Priston website.

I wish all villages had such a site. Building a web site for pages or blogging is as cheap as chips these days and if you are able to read and type, you just get on with it. If you get stuck, you can be sure that someone else has the same problem what ever it is so just type the keywords into Youtube or google and before your very eyes there will be a demonstration. Technically you just need to register a domain name (a few pounds), it could be your own name, and find a firm to host the site. Beware, the actual hosting is not the problem is the quality of service if you get stuck, and it is sometimes worth paying for a host within your own country. The big domain name sellers and hosts, normally based in the USA, do not have a live helpline and rely on Q &A to solve any problems. Inevitably your problems are not covered by the Q&A. When you have a problem and realise that you cannot contact anyone, that’s when the lack of personal service becomes a real bore.

This morning I discovered the architect of the Samuel Pepys website where one page of the diary is issued on a daily basis with the date if not the year of his activity. I receive it and look forward to reading its contents. The architect’s name is Phil Gyford and you can read all about him here.  some people are destined to be in public view, and some are designed to be backroom people and do an immense amount of good through software development, contributing ideas, helping other people to do what they do best and I think Phil is in this category. It warms my heart to read about him because I also feel that I’m in this category.

Incidentally, I have just looked at my own stats for today and I see I have visitors to my site from Ireland, Perth Australia, Sri Lanka but mainly for some reason from Finland. It makes the world a very small and cosy place to know that complete strangers are tuning in to what you have to say 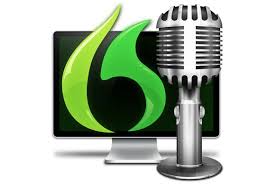 I wrote Phil a letter of introduction to myself thanking him for his contribution to the Samuel Pepys legend. I mentioned speech to text software, without which I could not produce this diary in such a short time. DragonDictate has been used by me for about 13 years now. Many people have tried speech to text and have been put off it because they tried an early version but now the amount of RAM in computers is a useful 4 GB which is what you need for high-speed computer processing and I find I can get near to 100% accuracy.

One thing I do have to remember, and that is to switch off before talking to people on the phone or in the room because not only will you see garbled version of your conversation on whatever program you are using but Dragon listens out what might be instructions to your computer and I have had files deleted, and page down scrolls which I did not intend. If my wife knocks on my door, she has to allow me a few seconds to turn off the listening ear. This is not so serious as some of Amazon’s creations I’m sure including the Dot, but it will be some time before I get round to that.

This assumes good articulation. The software allows for training which is particularly useful with unusual words, for example my surname, but it is not absolutely vital.  You have to develop a talent for thinking what you are speaking about while speaking. Once you have mastered the art your productivity goes up enormously. It is worth saying that if you are trying to write a missive on a website, the response will appear to be slow because there is so much hidden software within the site which will slow down the appearance of your words on the page. The most uncluttered client for such work is WordPad as one example.