..He gone, comes Mr. Herbert, Mr. Honiwood’s man, and dined with me, a very honest, plain, well-meaning man, I think him to be; and by his discourse and manner of life, the true embleme of an old ordinary serving-man…

…By and by comes W. Joyce, in his silke suit, and cloake lined with velvett: staid talking with me, and I very merry at it. He supped with me; but a cunning, crafty fellow he is, and dangerous to displease, for his tongue spares nobody…

I do admire Pepys’ honesty when describing people. He is a very good observer which on the Enneagram scale is a five. In the days before the telephone, people’s mindset had to be different because if you wanted to see someone you had little alternative but to turn up at their property. I consider this ‘community mindedness of quality’ which is so much lacking in cities today and remains only in small villages. So much current instant communication is nothing of the type. I think people’s brains are too frazzled to know what real communication is.

Today dawned bright and sunny with only the odd cloud obscuring the horizon of the sky. This is the season of plenty; we are running out of places to store beans and potatoes. The neighbours that we offer them to already have enough.

I was truly looking forward to today’s gardening job which consists in remodelling and disciplining a garden area, a lawn of 7 m x 20 m with various trees and overgrown bushes surrounding. The customer was about as close to the ideal as I have ever had in my years of gardening. She is a farmer’s wife. Farmers wives are used to mucking in and doing what is required so true to form she had her Wellington boots on when we arrived and helped us in with our tools.

When will customers understand that the more helpful and supportive they are to us, the more we will do. We are not robots. This was a lesson that our customer did not need to learn. She had empathy by the spadeful. It was very good as it is in most cases that the customer is there while we work because we need to ask questions as we go because garden layout and design is a matter of opinion. We will do anything the customer requests  but it is much better if we ask their opinion when we are actually doing the job rather than discussing some theoretical event that could take place in future.

Rather like the National Trust’s attitude to renovating old properties you have to figure out what was originally intended by the design which is quite tricky in the case of gross overgrowth which we had in this case. The principles of gardening are just the same as the principles of painting a picture. You have the background, the main features, and the job is to harmonise all and to remove the redundant, allowing the key features to stand out. Only plant may be perfectly fine in its own right but maybe out of place or deceased or too large, or excluding light for its neighbours and it is not inappropriate to cull such plants or bushes.

This is a ‘before and after’ impression of three different types of bushes plus a tree that is occupying the same space. Thinning out is the order of the day. 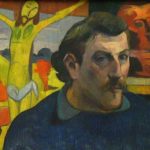 I was fascinated to read that Paul Gauguin, a leading post impressionist artist and writer known for his primitivist style and philosophy decided to sail to the tropics to escape European civilisation and ‘everything that is artificial and conventional’. He made this move at the age of 43 in 1891, frustrated by the lack of recognition and financial security in his home country. He spent his remaining years in Tahiti and the Marquesas Islands. I guess we idealise well known artists and think they had easy lives.  Try Frida Kahlo for size. Actually, try almost any artist.

You could count yourself fortunate if you obtained Royal Patronage as Grinling Gibbons the artist and wood carver did – after a long struggle. He came to UK from Holland in 1667 but languished doing routine work for ships in a dockyard in Deptford until spotted by someone with royal connections. He later came to be known as the Kings carver.