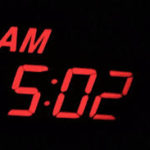 I have a certain admiration for people who get up early; they cannot be completely bad because they have the desire for productivity and making the most of the day. Sometimes I get up early only because I have finished sleeping and there is nothing more boring than lying in bed with nothing to do. Having said that, I have my small portable radio tuned to Radio Five Live 24 hours a day and you will be surprised at the quality of the material that happens at 3 AM and also you will be surprised the number of people who are up and able and willing to send texts or make phone calls at such an ungodly hour. Why the phrase ungodly hour has been originated I do not know. I regard the silent hours of the night as rather Godly – peace and quiet in time to think.

Why the headline? I was just listening to Spotify, a rap funk track called “if you live a violent life you can live to 100 or you could die tonight” I thought this was a wonderfully inspired title to a song and reminds us all of the transitory nature of our lives and how anyone can go at any time. I believe that the state of mind you’re in when you transcend your body will determine to a large extent where you continue your conscious existence perhaps in another life or perhaps in deaths fields who knows. I’m absolutely convinced that the soul being immortal  continues on its path irrespective of the particular adornments we have, suits, clothes, which we call  a human body which we wear for a few years and cast off. I do not identify my real self with my body, it’s my body for the moment but it is not me.

It’s a very sad thing to say really but I use my  www.flightradar.com to identify any plane that I hear flying overhead. Anyone with a PC can see who is flying where, and at what altitude and speed and vector. generally, I’m very nosy and so to know who’s doing what when where why is very interesting. This also applies to people walking down a street. It is a cul-de-sac so any stranger is immediately spotted. where we live we have a very low level of burglary. The only case was when some labourers have come in to do some work and took a fancy to something in the house and returned later to claim it on any voluntary basis.

Today I started a big job  of jungle clearing. That is what I advertise  and that is what I do. Clearing dreadful gardens requires a certain vision as to what the garden can be like. An extreme example of this are the lost gardens of Heligan, which were uncovered from ruin. Its a good story. When the National Trust take over a property they look back in the deeds to see what it was intended to be like by the designers, not necessarily Capability Brown  but many of the young designers that existed in the 16th 17th and 18th century.

Anyway back to the garden. The family situation is quite complicated. the house is going to be rented to by a young lady and her boyfriend.

The mother of the divorced father owns the property. The daughter on entering the property agrees to pay rent to the mother and the father will pay the bills. There are therefore three separate parties that are interested in the job being done well. The divorced husband who wants to look after his daughter. The daughter who wants a reasonable place for living and the divorcee who would like an income from the property from rent with a security in the future that she can move into it in her old age.

The day was warm and we did work extremely hard. I wanted to push myself to see how hard I could work and whether age was taking its toll. When I was sweating so much I could not work any more I sat down and listened to my heart to see if there were any irregularities but there were none.

The young lady who is going to move into the property, together with her partner, are going to live in this very nice three-bedroom bungalow. There was a most extraordinary reaction to  the work that we had done – the daughter cried. She did not burst out crying, it was what we called tearing. At the mention of her grandmother who used to live in the house,  there were further tears. I don’t think it’s anything to do with the fact that she is a social worker. My partner thinks it’s to do with a kidney energy imbalance.It’s possibly the recall of important memories.

We discovered that her grandmother was very interested in owls. This followed a discussion about what to do with a big tree that needed felling. Having been to the Bath and West Show I thought it would be very nice to use one of the very talented chainsaw artist to produce the owl  so I thought if they cut the tree down to about 6 feet and let the artist get on with it this would be a wonderful memorial for the grandmother.

Anyway day one finished as you see with taking a completely derelict area,  dragging away many cubic metres worth of spoil, and returning it to the condition as it was 20 years ago when the grandmother was able and willing to cultivate it.

Incidentally, we developed a time-saving way of getting rid of spoil and moving it. We used a huge tarpaulin, dumped everything on it, and dragged it to its new location. There was no need to do any bagging.

The granddaughter brought photographs of how the garden looked in days of yore. It was indeed unrecognisable from its present condition. She said that in the 1980s there were no houses surrounding it and the garden overlooked fields. If you were to look over a wall you would see small houses densely packed together with gardens the size of postage stamps. The daughter said that they had been offered £400,000 for the land but that developers would have used it for flats and she asked her mother to let them keep the house.

The daughter also asked me if I will be available on a weekly or regular basis. I replied saying that this was not our normal way of doing things. Our aim was to work ourselves out of the job so that the owner of the property could maintain it. She then went off on another theme saying that originally she told her dad not to have a gardener because we should do it on our own but she then realised that they didn’t have the tools and the energy to do the job.

A lot of people do underrate our profession and think we are just gardeners but we are far more than that quite a lot of wisdom is required and not a little bit of advice which I for one freely give to potential customers.

I was glad to get back to have a hot shower and a glass or two of white wine.