numerous business dealings and some squabbling from our diarist 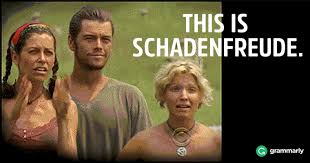 schadenfreude is a feeling of pleasure or satisfaction when something bad happens to someone else. Hurricane Henry is approaching from the gulf of Mexico and going to  centre its activities on Corpus Christi in Texas. Worse than the wind there is a threat of up to 60 inches of rain. Why do I tune into Fox TV, a station that I never touch with a barge pole, to see the latest gruesome details?

Maybe such catastrophes trigger a fear that we have deep down that something will happen to us but for the moment we are spared. The whole is a bit more complicated. The US Govt have approved 175 patents for weather control. The idea of some disturbed people amongst us is to use perverted Tesla technology as a weapon of for example depopulation. It is much easier to get guns off people if they are vulnerable having lost their homes. Check out weatherwar101.com if you don’t want to believe me.

And now for something completely different
Yoga with goats – yes really

Anyway, I can think of something more interesting though quaint. I had never thought of doing yoga amidst straw bales on a farm where goats would be allowed to interact with me, walk all over me and so on  but some people are evidently quite happy to pay for this being done to them. I think this curious therapies started in USA but it is evidently spreading to this country, the UK.

I don’t have any doubt that animals have unconditional love but it is difficult to detect this in a charging bull. I suppose in this case the love is expressed by protecting their youngsters. From the quite long excerpt on morning television it seems these people are enjoying themselves.

I know that dogs and cats are very intuitive and supportive and many people tell stories of when they have been feeling depressed and the pet has come and cuddle them and paid attention to them in a particular way, so why not goats.

Somerset does not have a great tradition, come to think of that it doesn’t have any tradition at all of having people round to meals particularly supper.  Historically, the miners will have returned home so exhausted that they will would little more energy than is required for their tea or their supper whatever they call it and then off to bed for a 6 AM start the next day. The retirees round here tend to keep themselves to themselves during the evening though there is a lively scene of groups and societies that start meetings again in September through to June. On these occasions, the standard fare is tea, coffee and cake with other refreshments thrown in if you are lucky. The younger working people are so preoccupied with looking after their kids and surviving the daily commute to Bath and Bristol they don’t have much time for social entertainment particularly during the week. There are many people working on low wages so they have to work  long hours such as the ones who work in shops and so on so they don’t have much disposable time or energy to do social stuff. I’m talking about formal occasions not chatting in the street or over the garden wall.

We however do very much enjoy entertaining and pull the stops out for the people we like. The great thing about having guests is that you have to clean and tidy your house, unless you want to be seen as a complete slob. We spent the whole of the day vacuuming, persuading reluctant spiders to emerge from their place above the skirting board, laying the table and making sure that the implements were clean, cooking ambitious food which as it turned out was far too much for the assembled gathering. I did an amazing shepherds pie which was enough for eight people and we eventually had enough left for my meals for the rest of the week. I shall freeze some of it. For some reason I always over provide food. it is a habit I cannot break. Perhaps I should advise people to fast for the previous 24-hours. I think to myself, quite irrationally, that it would be such a disgrace to run out of food in front of your guests.

One of the guests was South African and we were able to share memories of KwaZulu Natal, the wonderful beaches consisting of acres of sand, wine and beer that is not eye wateringly expensive, the friendliness and dignity of the local population, the beautiful sunsets,  the mountainous landscapes. At Cape Town airport there was a sign saying “you will leave South Africa but South Africa will never leave you”. At the time, I laughed at it as a clever PR slogan but it is absolutely true. I have not been back to South Africa now for nearly 3 years and I miss it a lot. I suspect part of my soul is lodged there.

A most pleasant evening with the delightful feeling that there were many subjects that could be covered but on another occasion. I must find an excuse to go to SA.