The outstanding design / logo for the web site. Well done someone. 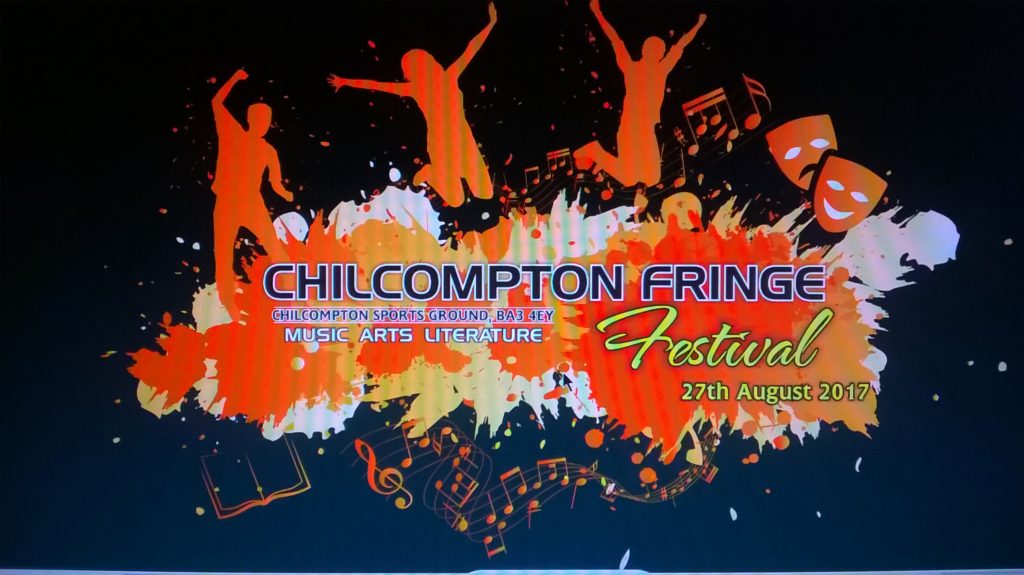 We arrived at about 12.30, half an hour after the event was opened on a grand all-purpose sports field suitable for football, cricket, anything else that needs a large space to find about 100 visitors there. Since the opening times were between 12.00 and 11 PM we expected the numbers to build up as the day went on. They did.

It is quite brave for a small village to have an event which is called a fringe Festival which implies that there are other festivals that are not fringe but it matters not. The website was put together by an imaginative team well done.

My eagle eye, when I’m not enjoying myself, is focused on how things are done and how they can be done better. I do the same with myself by the way.

I’m sure this lady had every good intention. There were five people in the audience, 3 to the right and 2 to the left. She sat in front of the three and spent 90% of the time looking at them with only the occasional glance at the other two in the audience. This is an absolute no-no because you are excluding the others and making them feel that they are not part of things. If you look at good speakers you see they look around to everyone and make sure that its proportional even if the audience is to the side or even behind

When you are a group of volunteers it is easy to forget something. At the entrance there was a fair amount of money being taken and the only thing they had to stop the notes blowing away in the wind was a red plastic bowl.

It is also helpful for committee members to have some sort of label or notification or uniform so that if someone has a problem for example a medical matter or a query all lost property it is good to know whom to ask. They probably have Public Liability Insurance and I would have thought this is part of the professionalism.

Beer and cider were served in limited varieties but the basic needs of people were met. I cannot speak for what happened later when there were probably more people for the main music acts in the evening. I did not notice any lights set up so I suppose they manage with what the few lights they had. About 10:50 PM we heard the sounds of music wafting across the landscape when we were about to go to bed but it did cease at 11 o’clock.

This is a wonderful example of motivation. Helena is getting people to sing who do not think they can sing and maybe have never sung before. She was working against a background of noise and still managed to retain everyone’s attention. Anyone who is a teacher of actors or performers in any form should watch this video. Watch to the end.

PS Unbeknown to me, Michael Eavis of Glastonbury fame opened this event at 11.30 AM to what must have been a handful of people. Is there any limit to this man and his dedication to the community. From the Midsomer Norton Journal “In a short speech that referenced his experience of Glastonbury’s early days, he concluded with “Everything starts at the beginning, and this is the beginning for you people – and next year I shall see you again! Good luck, have a wonderful, wonderful time, and congratulations – I wish you every success’.

This is the true voice of community speaking. His words were not attended by TV crews but this is Michael attending to his responsibility as an influencer of youngsters.

Giles Harrod, a spokesperson for the event said” Michael Eavis did a brilliant job opening the Festival and it is fantastic that ..he .. came to open the event for us; it gave everyone involved a real boost!”

I found enough to keep me interested and occupied for about three hours and was considerably helped by the fact that the weather was ideal.
Full credit to the organisers. Very few people realise that planning for such events start many months before and enormous amounts of people have to be cajoled, coerced, persuaded, begged, even being asked to give up their bank holiday Sunday for the great cause.

My summing up below are just my observations and are not meant personally or critically.

If you possibly can, try and gather everyone together before the event starts and appraise them all the facts they need to know on health and safety, the what if….   and who is supposed to do what. It is easy to slip out of phase in the frantic period building up to the opening time.

There were no programs that I could see available. Printing is cheap enough and having the major features on one A4 sheet and contact details does add to the professionalism.

Make sure that the music stands are far enough away from each other so they do not disturb.

Committee members should have labels on and any collecting point for money at the entrance should have a certain standard of security.

Don’t situate the features too far from each other because it can get lonely if you’re 50 yards away from the nearest stand and people will not tend to go there. It’s a bit like the coals on a fire, to have an effective heat you need the coals to be fairly close. I was thinking of the Welly Throwing stand though agree you have to be careful of flying objects.

The most important point is that PEOPLE make the event and if people come along willing to make a contribution and be friendly then the event however simple will be a success. It was my impression that the people of Chilcompton came out in very good numbers and enjoyed themselves so you can’t ask for much more really. See you next year.