(Lord’s day). It raining, we set out, and about nine o’clock got to Hatfield in church-time; and I ‘light and saw my simple Lord Salsbury sit there in his gallery. Staid not in the Church, but thence mounted again and to Barnett by the end of sermon, and there dined at the Red Lyon very weary again, but all my weariness yesterday night and to-day in my thighs only, the rest of my weariness in my shoulders and arms being quite gone. Thence home, parting company at my cozen Anth. Joyce’s, by four o’clock, weary, but very well, to bed at home, where I find all well. Anon my wife came to bed, but for my ease rose again and lay with her woman.

To keep the context: this is the last day of Pepys’ travels….customs and relationships are beyond me. Lay with her woman? Don’t get it. 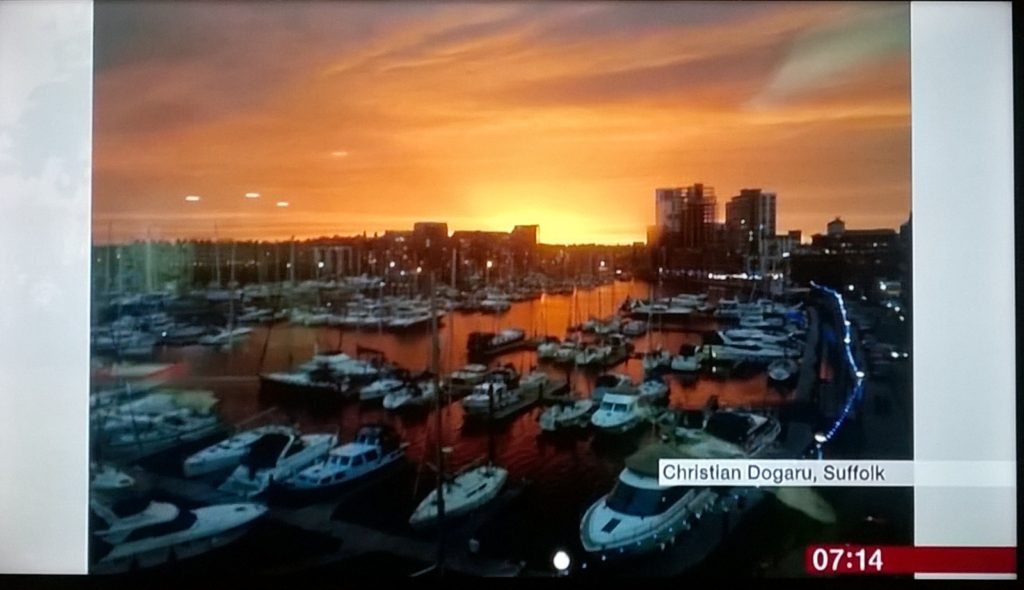 Watch TV and all the wonderful red skyscapes of yesterday.

To Bath and spotted a really original and brave poster, trying to popularise football and  get people to come along and have fun.

Today is slated to be a  busy day. I must speak with the manager of Bath and area Creativity Works events which I attended last week (see recent entries relating to art).
Note to myself:
it is easy to forget the following:
1 those who encourage others also need people to encourage them.
2 If participants have had a good experience it does need repetition sufficient to change the brain connections (mind set).
3 Trust in anything is not automatic to put it mildly so a safe space needs to be created for the shy or alienated ones to ‘come out’.

This applies to any group meeting for any purpose. I hope to invite people from the workshops to come to our place in Midsomer Norton for a day of story telling and creative work in general. It is good for people, especially those who are self employed and / or do not have regular contact with others, to experience a change from their normal environment. This can be a healing thing in itself.

The Bath Film Festival is coming up 2-12 November. I always leave things until late in the day with the result that many of the films I want to see are booked. Its not so bad here in Bath but at the London Film Festival (BFI) it is even more important to book early. The number of films was far greater – over 100 – as is the frustration when two ‘must see’ films clash. I have booked for 8 films and have spent the grand sum of £140 for the two of us, a record in my life for a single purchase of entertainment. However this is nothing compared with other entertainment, London shows such as The Book of Mormon. Stall tickets are between £115 and £177. Circle tickets can be bought for £53 each.  That makes our eight shows for the two of us seem positively cheap.

To a writing group based in Bath. The group is peer group run and there is no manager though there is a facilitator for each meeting. One of the classic challenges, if not the key challenge, is to strike a balance between ‘leading’ the meeting i.e. functioning as a motivator and a catalyst on the one hand, and on the other hand making yourself invisible and focusing on those who might have a contribution. Sometimes the shy ones are the ones who have a gift of seeing things differently and they are the very people that need the most coaxing. You almost need to be a mind reader to do this properly but I can imagine it is a very rewarding (volunteer) job. People need to allow silence to be. Silence is creative. Silence is nothing to be afraid of. Leaders – don’t panic if no one says anything for a few seconds. They are processing.

I found it interesting to think of the difference between supporter, listener, diagnostician, therapist, coach or counselor.  To have a therapeutic effect, you do not need to be a trained therapist or counselor. A person who listens and provides the right environment is creating a therapeutic situation. That may be just as relevant to the mental landscape of the client and produce just as good results as a trained person (no disrespect intended to anyone). If I take a friend out fishing on a river away from the phone and in peace and silence I have provided a service for them in that the situation is capable of having a beneficial effect on the friend’s mental state.
In real life what is required is a mixture of help: listening,  a supportive and safe environment, and someone who has been trained to give advice in specific situations. A big factor is a client’s willingness to listen and not to be afraid of losing their old habits of thinking. ‘better the devil you know’ is alas an all too common preference.

Someone read out a number of meanings of names of people translated from other languages.
‘one who lives alone’
I chose to continue the idea
.. is not lonely unless they chose.
being alone is being separate not lonely…

I said there was no reason for anyone to be lonely because so much was going on ‘out there’ but I fully acknowledge that some have difficulty with themselves but also ‘out there’ are people who could help if asked. I suggested that some married people were lonelier than some single folk insofar as they did not share any interests or affinities with their partner. They might as well be in prison. Do two lonely people together make two contented people?  What about those who want to separate but are tied down by a mortgage? There are those who like their own company and I am one such. I closed by saying that we should give daily thanks for the freedom that we have.

One thought on “Record purchase of film tickets – loneliness – being encouraged”