This is the fifth anniversary of our move and I reflect on the benefits and disadvantages of being here in Midsomer Norton.

This evening Mr. Hollyard came to me and told me that he hath searched my boy, and he finds he hath a stone in his bladder, which grieves me to the heart, he being a good-natured and well-disposed boy, and more that it should be my misfortune to have him come to my house.

Pepys had the same condition. Removing bladder gall stones was extremely painful and required two strong men to hold down the unfortunate patient. Pepys was one of the first to undergo such an operation which in the age before anesthetics is quite remarkable.

So the famous meeting is now over, nearly three hours of it. It went very well and exceeded my expectations. We provided lunch which consisted of simple and nutritious food which doesn’t require too much fussing around and most of which was prepared beforehand.

I think with any meeting on any subject, there needs to be a certain minimal chemistry and a certain desire to communicate then the meeting more or less looks after itself. Hidden agendas do not help the free flow of conversation and mercifully there were none on this occasion. The joy of meeting and sharing especially when there is a spiritual common denominator lifts the spirit and helps us to see what was previously cloudy.

In this age of absentee and incompetent government we only have each other to rely on and to build up a community spirit with many people. This is the best way of ensuring that when times get really bad (we ain’t seen nothing yet) there is at least someone to talk to and furthermore be understood.

Today is the fifth anniversary of our move to Somerset from London. When I first moved in, the mayor, Paul Myers OBE, warned me that things will happen for us but 10 times as slowly as you would wish and he was absolutely right. This is not high-pressure’ how are you’ ‘we must do lunch sometime’ of the city. The charms are hidden and the more people you know the more people you know but there is plenty going on, not perhaps quite the scope that you would hope for but now the strong and independent spirit you can survive and thrive, picking the cherries as you see fit.

One of the enduring pleasures is the lack of traffic. My wife drove back from Timsbury, a distance of 4.3 miles, in 11 minutes long winding country lanes. We have one set of traffic lights in our town. The rest are pedestrian crossing lights. When we were living separately and Francoise visited me from Haverstock Hill, there were about 35 pairs of lights to West Dulwich where I lived. From memory I think the distance was about 10 miles and it took her between 45 and 50 min and this with a lot of stop go. Don’t even talk about rainy Friday nights in the winter.

Most people here are definitely conservative and most of the topics I’m interested in talking about are not shared by the vast majority of the population. This one simply has to adapt to and it makes me treasure more the times when I can talk and be understood. I do bless the Internet here because there are numerous chat rooms where you can talk with like-minded people and although it is not the same as face-to-face, it does give sustenance of some sort. We are lucky in having a decent speed. Download is 74Mbps an and upload speed 18.8 Mbps. I’m told that the response time is 56 ms (latency). I am not quite sure what that means but so long as I can watch films, Youtubes, and upload data without having to grow a beard while I wait then I am happy.

I’m now chairman of the local allotment committee and very much enjoy encouraging people to make the most of their plots. People do not realise that with a little management you can eat free vegetables including with vegetables for between four and five months. One of the chaps has three plots and he hopes to make his whole family self sustainable over as much of the year as possible.

There is a ghost story telling session this evening  so as I was invited by a new friend Elizabeth Lovely I thought we should attend. It was at Burdall’s Yard, a property owned by the University which is used for a wide variety of musical, social, and intellectual pursuits. Seven writers told horrifying stories on varying topics including a man who made a habit of texting his dead relatives, and someone who was haunted by a tune that they could not get out of their head, someone else who bought a doll that had been worn by a kamikaze pilot which unseen forces prevented her from getting rid of, and finally of someone who became obsessed by a man at work thinking he was in love with her.

All excellent stuff,  and stuffy it was in the small meeting room where I almost asked for oxygen but full of delightful appreciative people as you would expect in a place like Bath.

Next to us sat a young woman who had moved to Bath at the end of the summer from Northamptonshire and was living on her own. She had joined meetup.com which is an American-based agency where you can form your own social groups or networks of whatever theme you choose. Unfortunately the commitment of the average member is not as it should be because you can say you’re coming to a meeting without ever meeting anybody in person beforehand so the dropout rate is quite large. I have a word with her and encouraged her and said that things would turn her way in an unexpected fashion. She was attractive and had very nice long hair. I said it was only a matter of time so she could relax and enjoy herself.

The temperature as we left was about 1°C with the totally clear sky with lots of twinkling stars which you could even see from the city of Bath. I was standing outside the venue when two young ladies came along to me and said, “thank you so much for organising the event”. I had to think quickly but decided to accept their thanks gracefully. Did it really matter that I had nothing to do with the organisation at all? I acknowledged the fact that they were grateful and if they thought I was the organiser does it really matter.

Opposite the venue was a piano shop with a remarkable display of keyboards which was so fascinating that we decided to cross the road to have a look at. 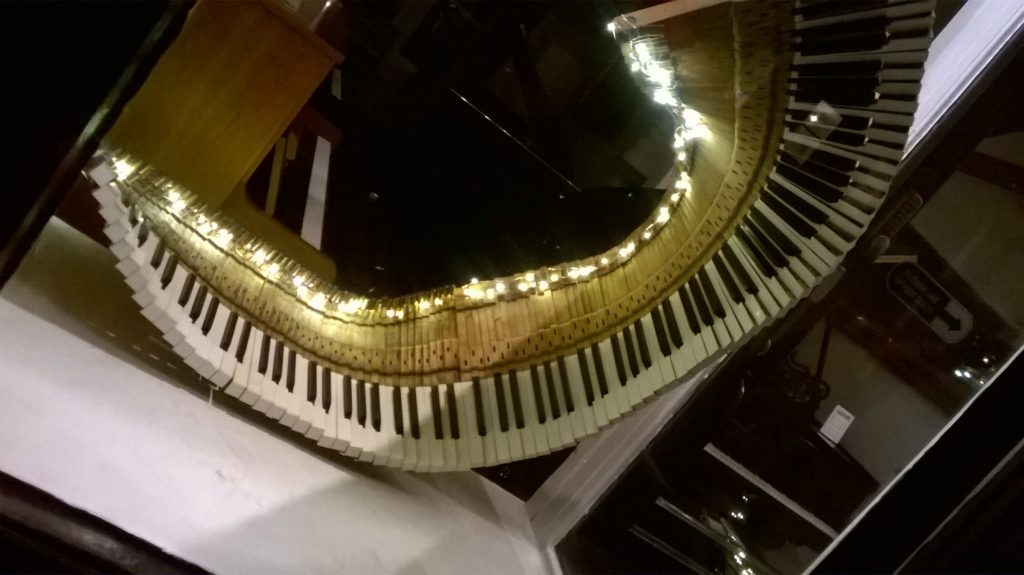 On that note (ha ha) I close the diary this evening. as Pepys would say home to supper then to bed