This morning, I rang my friends to tell them how helpful the meeting of yesterday had been. I may be stating the blindingly obvious but sometimes all we are required to do is to listen to someone with unconditional love and acceptance (part of love) because in order to process an idea it has to be spoken out. This can then enable stage two, which is the sorting the wheat from the chaff and then figuring out where to go on a practical level.

Only the speaker can make the decision. The job and indeed the privilege of the friend or listener is to provide a safe framework for this inner development to happen. The brain LOVES to work. The brain is the world’s ultimate relational database. When we allow it to work properly it floods the body with lots of feel good chemicals which encourages it further. Alcohol is a clumsy though pleasurable attempt to replicate these feelings. It would be hypocritical to say that I don’t drink

nothing I wish to comment on. Read the diary by clicking above.

This being a wonderfully sunny winter morning we decided to take ourselves off to the few remaining Christmas fairs before the season ends. We went to one of my favourite little villages, Mells, where there was the usual high quality Christmas fair.

Outside, was a lady and her dog trying to control a large-scale ordnance survey map in the wind. I went to try and help and asked her where she wanted to end up. She was trying to find a way to Holcombe, which is about 4 miles away, by a route that avoided fast moving traffic which tends unfortunately to be a feature of small lanes, sunny days, weekends, where people enjoy themselves exuberantly while driving their cars. I said she should get a GPS for walkers that she responded that she wanted to be free of technology on a weekend.

On the way to our favourite stream, we had a chat with a couple about the variety of tree which was displaying such a wonderful show of berries this time of year. We told them about the fair which we attended they thanked us for the information.

While at the stream we had a chat with a man and his dog. We remarked that the level of water was high but he said this is nothing to when it’s been raining a few days and the water impinges on the meadows on either side of the stream. 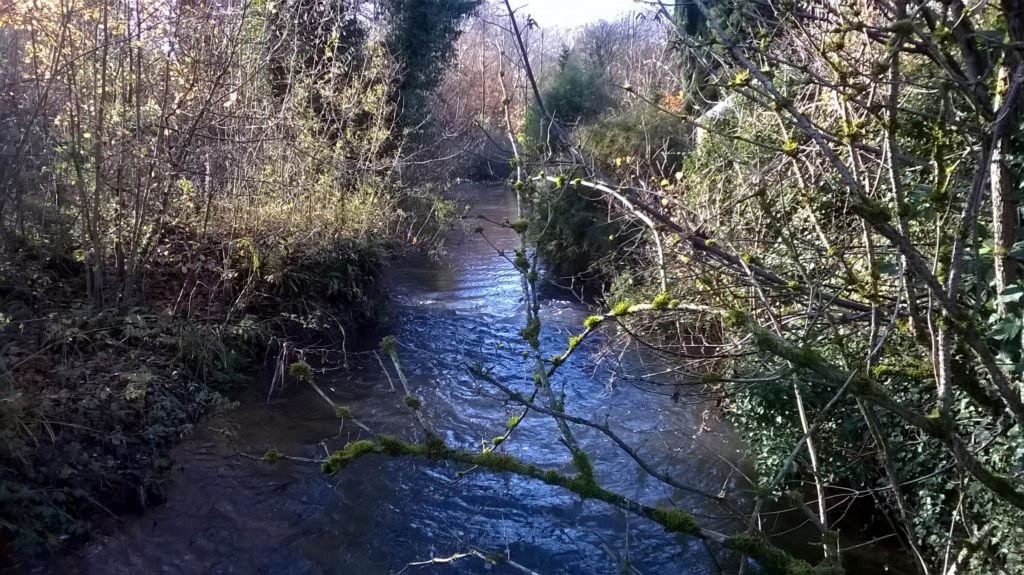 The next person along the road was a lady with the dog. This dog had an exceptionally warm temperament and I remarked that it must not have been a rescue dog but she said it was. She told us about a dog rescue shelter Happy Landings, south of Shepton Mallet where rescue dogs are looked after for some weeks before being rehomed.

Back at the post office which is the centre of Mells, Francoise had an animated chat with two French speaking people one of whom was a multilanguage speaker and the other one who had time in France.

We had a further chat with someone who had a small stall from a firm called Cavendish Cooks of Bath who was selling high quality frozen food either for one person or for four people. She gave us a sample of Sticky Toffee Pudding. we ended up by buying one of her frozen products but for one person or possibly two persons, coq au vin, for the princely sum of £4.95. When you consider that there are no artificial additives and rubbish to bulk something up, that is a very good price. I think this whole business of theirs is a labour of love but I hope they make some money out of it. 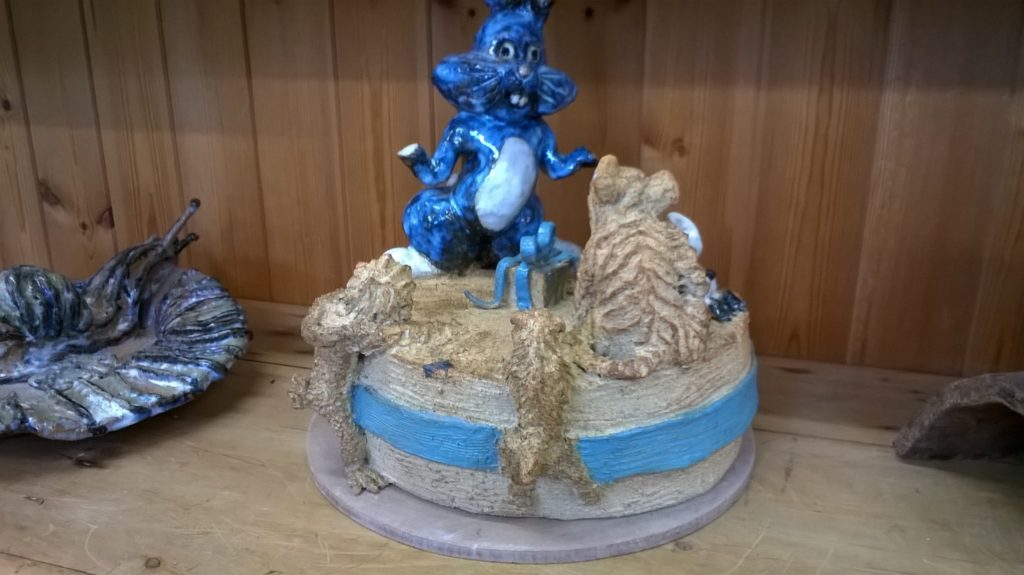 Our next conversation was with a sculptor in Nunney, where we had noticed that there was a fair on. We followed a sign saying “art exhibition” and discovered a very competent sculptor called Lady Karen Watson whose bronzes in my view are in a class of their own.

The next conversation was with her associate Lynn Keddie who paints country scenes which (or is it that -I can never remember which one applies) were being exhibited. I was talking to her about the diary you are now reading and she said that that seemed a lot of work and I said “no it’s not actually because I use Dragon Dictate speech to text software”. She commented that if you want to know what you have written, you have to read the text aloud to yourself.

A fellow art enthusiast standing by said he had heard of this but not dared to attempt it, so he reverted to the  more familiar traditional typing. I said that technology had advanced a lot in the last few years and it was really well worth giving it a try but you needed at least 4 GB of RAM. Whether he got the latter point I don’t know but we parted with a smile on good terms.

We then moved on to the Village Hall itself where the fair was taking place. We met a lady who was half Swedish and half German who created the most amazing artwork in the form of woolly hats. They cost £35 each but had we wanted to buy one they would have been worth every penny.

We walked back through Nunney. Unusually there are two websites with varying degrees of updatedness. The second one is here.  The sun was at just the right angle to make the leaves shine. This village is very well organised and has an excellent website though there are only a few hundred people living in that area. Visiting people if you would like an example in miniature of all that is good about the village then visit this place.

A final conversation of the day was with yet another participant in a fair in Kilmersdon. She was a weaver and she was enthusiastic about alpaca wool. She had bad circulation in her hands and feet and found that the only material that could keep her warm was from this animal, more so than any other material. Alpaca wool is very fine and when you touch it you can hardly feel it but it makes wonderful socks. She invited Francoise to have a go but added that she probably made look easier than it was.

Why do I give the title to this diary entry? Our society in the UK is so set up, particularly in the country, that you can talk to anyone without any barriers. When you see someone walking along, or pass them on the street, you just start a conversation. They really don’t care if there’s one of you or two of you in fact you could say that to be on your own is a positive advantage. The only problem is you have to get out of your apartment or flat or condominium and actually go to where people are. Nutrition may be available in small quantities per person but nutrition it is.

I do this on my own when I go out and abroad apart from my partner and of course it is not quite the same but if the drive is to talk to people and get the most out of your day then you can achieve it. I believe it is actually a disadvantage to be in large groups because that puts people off. Obviously you wouldn’t walk around by yourself in the dark in a strange city but under normal daytime circumstances there is absolutely no problem. This applies even if you are a visitor to UK. It does help to speak English. The English have this “thing” that they don’t care where people are from; they are glad to help and chat about the world in general (don’t forget the weather).

If you can think of everybody as one, we are all part of the same universe and the same consciousness, then loneliness will become redundant in your mind. I’m not talking about a conscious act of deciding to be solitary for one reason or another.  Pressure by the media that you should be in a couple is extraneous and mendacious. They do this because the purchasing power of a couple with their physical requirements of greater than that of an individual.

There is absolutely nothing wrong with being on your own and you are not missing out. You just have to make a slightly greater effort to get out and about and as sure as eggs are eggs you will make friends, but they will probably appear when you least expect them so the worst thing you can do is to consciously hunt for friends because that will put people off; they will pick up the vibes of worry and insecurity a mile off.

I note that I am up to 1500 words today, actually 1528 words, so I guess I should stop and do something else, perhaps prepare a meal.