What you may ask is your diarist doing going to a course when everyone else is rushing out to buy things, consume things, standing in lines to buy roasted pork sandwiches, mulled wine and the like. Good luck to these people BUT I was not in ‘consumer mode’ because <strikes magisterial pose> my dear friends, enemies, adversaries, critics, admirers, and those who don’t know me from Adam, other business do I have.

The bus company were in a good mood this morning at the Park and Ride in Odd Down; a chap in a high viz jacket was giving out sweets as well as selling bus tickets.

Certainly, everything is going on today. I love these immobile human art installations. The person portrayed below was certainly getting plenty of money including a good supply of pound coins and all he had to do was to sit still in his made up apparel. 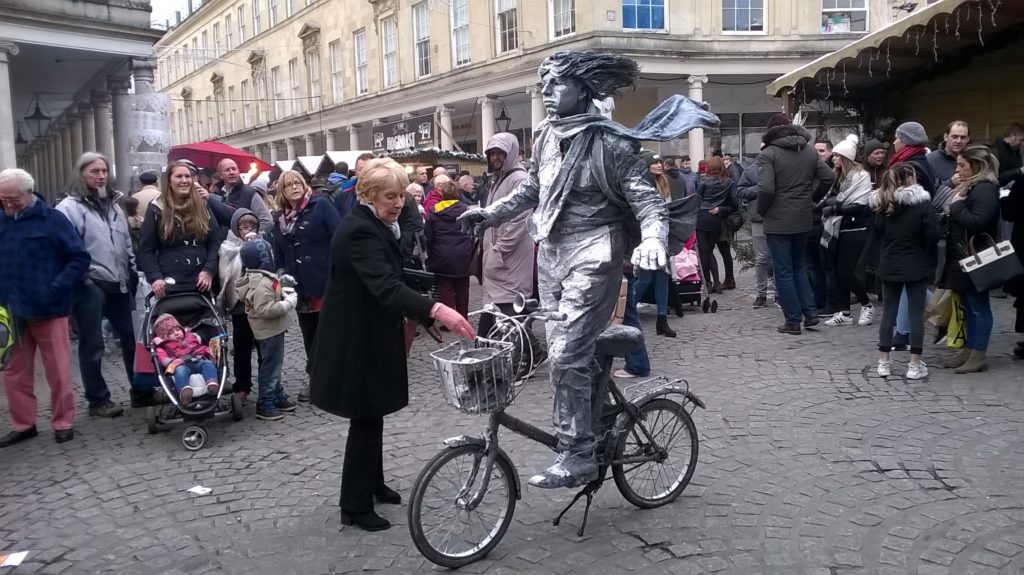 On my way back from the event I’m about to describe, I detected raised voices among two people who were being asked to leave a mobile phone shop. I could tell from the body language and tone of voice that the two people, the complainants, had lost it and they were engaged in immoderate language.

The salesperson who they claim have been rude to them was asking them to leave the store so clearly this was the end of an acrimonious dispute. One of the reasons I do not use headphones when I am out is that you should ideally be alert for any difficulty or potential difficulty and prevent it if you can. This I achieved by walking up to the harassed sales assistant who was actually being very cool and siphoning him off in another direction. I have learned from long experience that if someone is angry beyond a certain point they will not listen to anyone.

The two complainants left threatening to report to the head office and I simply ignored them and asked the shop assistant whether he was okay. He said yes and thanked me for my intervention. It would have been so easy to walk by on the other side but as I make practice of being fully alert when in public I knew exactly what I had to do and did so. We are not children and we need to police and look after each other. As Kenny Everett would say ‘in the best possible taste‘.

But I digress*. Maybe my whole life is a digression from my main purpose which is to cast off this mortal body and take my place in the real world where force does not prevail and time exists no more. I am waxing poetic because the morning was devoted to a three hour workshop on the topic of creative writing. First off, it is quite amazing what an apparently fairly normal group of people can produce if their minds are tuned to a common purpose.

* a digression can be a very valuable embellishment to a talk. After the speaker has laid out the main precepts he will digress, apparently telling a story that has little or no relevance to the topic but then show how the story does indeed relate to the main subject. In other words, a digression does not have to be counter-productive.

Five of us turned up. There were four ladies of middle-aged and myself as the nominal male. We were ushered into a downstairs room where stood a big oak table, a clipboard, plus a lovely open log fire and a view over the City of Bath which must be delightful in all but the worst weathers. The people who were meant to be there were there by some magical process. I have often had the experience of laying out chairs for a meeting after using my intuition to find the number of people showed up was exactly the same as the number of chairs I had laid out. This is neither a conscious nor a rational process.

The method of the course was just as interesting to me as the content. It is necessary at all courses long or short to orientate the people and get them into the mode and indeed the mood. We were asked to write three statements about ourselves, two of which were true and one of which was false. I wrote that I was a Life Coach, that I lived in a bungalow in Midsomer Norton and that I was 68 years of age. The others had to ask questions to determine which was true. I was rumbled finally when someone asked me the year of my birth and I remained silent. We repeated that process with the five of us with much laughter and gaiety.

The next exercise was to discuss various genres of writing. There are many types including horror, Victorian Gothic, thriller, noir, mystery, crime and detective, fantasy – a world of magic and symbolism, magic and the supernatural which could be called occult, existential, literary drama, sci-fi, romantic including erotica, historical, comedy, biographical, and travel. We discussed the implications of all these and attempted a definition with varying degrees of definitiveness. 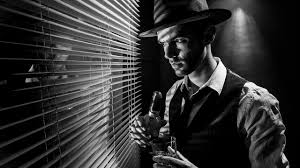 Has anyone considered the meaning of the word ‘noir’ as opposed to horror. Horror covers anything and everything which produces an intense feeling of fear, shock or disgust. I was horrified at the way they had left the condition of the bedroom. There was a horrifying incident involving two cars.

The word ‘noir’ has a much more subtle meaning. People appear human from their appearance but their behaviour belies it. There is a dissonance between their words and actions. The feeling of ‘noir’ is heightened when we see in a film or story that one person is not aware of the true nature of the other. Worse still, we see what might happen if the innocent person does not see what might happen to them. In other words, two equally evil and twisted people are much less likely to constitute the attribute of ‘noir’. The common element is deception.

We discussed that when writing, you had to decide what your genre of preference was, to avoid causing confusion to your readers. Given sufficient artistry, you can slip from one genre to another.

Anyway, we played with these definitions in some detail and then after we had given our contribution, We were handed some leaflets giving the various classifications. We were then invited to write a story choosing any one or  combination of the genres. We all came up with something completely different. I chose “Brexit meets Dracula”.

This is my contribution:-

T’was a cold and frosty night
and the moonlight shone
through the windows
onto the assembled brood.

… The last duties to complete
before they set off
on their pillaging, not of
worldly goods but of the
very lifeblood itself of their
distant relatives – the effete human being

These despised and unaware
‘useless eaters’, only ‘valuable’
– if that is even the word – for the pulsating
warm fluid that passes through their veins

We entrance them
we suck from them
we engorge ourselves
and yet we are never satisfied
our need creates another need
for a power which creates a need
for more power.

We do not take more
lifeblood then needed
otherwise our object of derision
would be bereft of life.

And now, targets chosen,
we fly off into the night
seeking the strongest
that we can make weak

And what of our life eternal
in this contrary stance
where all but alas is inverted?
Our future we cannot see
save repetition without end.

In such fashion we have no future

All five pieces were read aloud and comments given. We had a lively discussion about the balance between the need to praise the work, and give constructive criticism. I feel that most of us are very bad at this. We give a very brief thank you and you know that the word …but…. or … unfortunately….is coming which negates the value of the first positive statement.

We then had a break and were then asked to do a briefer version of this procedure, to describe a person and the situation they were in.

A person called Donald who was sitting at Durham railway station thinking that he should end his life and finding that what he achieved so far amounted to zero. And he wondered if he could disappear from this life by being still an invisible, would anybody notice?  He realised that he could not go forward, or backwards or sideways and he asked himself “where is the freedom in that?” He then had a minor breakthrough or perhaps a major one realising that the only way out is up.

I made a comment that it was not possible to tell if someone was having a breakthrough by looking at them walking on the street for example. People, especially the Brits, seldom show their feelings though they are not so inscrutable as the Japanese or Chinese.

One of the participants asked if it was okay to copy someone else’s idea and we made the point that everybody is unique and you can copy someone’s idea but you cannot copy their mind. She is unique on the planet as we all are.  I made comments about my work as a Life Coach and said the idea was not to interfere with people or make suggestions, but rather to facilitate their own thinking processes. I also said that unless the person was ready to work on something, you could say exactly the right thing, and it would have no effect whatsoever. I describe the process of becoming ready rather like a ripe egg in the female ovary.

I never cease to be amazed how productive small group of very eccentric and ordinary people can be as they wish to. For me, three hours was about right for concentration. The time did fly by or should I say float by pleasantly. The site of the sun rays on the log fire introduce a certain timeless element into the whole.

I left the workshop, promising to return. As I walked down to Bath city centre (you either walk up or down in Bath. It is very much in a valley) I found myself disjointed from the hordes around me referred to above. Without the capacity for original thinking or come to that any thinking which will do for a start, the prognosis for humankind is not good.

Israel are at it again, using Trump’s decision to move the US embassy to Jerusalem from Tel Aviv, to vastly over react to Palestinian protesters by conducting bombing raids with missiles when the Palestinian has fired a rocket or two. They actually want protests to give the justification to take over what is left of Palestine which is exactly what the Zionist psychopaths have in mind.  But enough of such gay banter. Hopefully, this Christmas I will be able to switch off the nasty things and either go into a pleasant vegetable state or perhaps something akin to meditation where I can link my higher mind with the real sources of harmony in the universe and thus link to other people, good and bad, in a different way.

Approaching home base I went to our allotment and dug up about six semi-frozen leeks and some spinach which we will no doubt have for a meal this evening. The soil has changed from being delightfully diggable to a morass of mud. Three new allotmenteers have signed up; it is very good to have a complete allocation of 64 allotments, a nice round number if you ask me.

My goodness, it is 4:10 in the afternoon and dark already. At least we don’t have any snow.