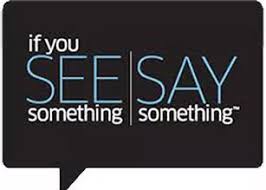 There is a slogan in the USA with regard to security “if you see something then say something“. That works well in a paranoid and extrovert country but it does not necessarily work well in the land in which I live, the ancient island called Great Britain. In the dim and distant past it was linked to Europe so in geological time the English Channel is an upstart. For most of recorded time the island was just referred to as ‘Britain’. I am not quite sure when the ‘Great’ came along. I don’t feel there’s anything particularly great about us as I don’t think there’s anything particularly United about the United States but as they say, don’t start me on that one.

This is my problem. I tend to be a) little bit nosy and b) a perfectionist. when I see something that is not right, I want to correct it. I do not suffer from lack of courage and will immediately draw whatever it is to the attention of people if given the slightest opportunity. The problem is particularly great if I see some fault or procedural mistake which in my view will harm a business or the enterprise in which the individual is engaged. My latest challenge is the case of someone who is doing a website. This website purpose involves me to a certain extent. On each page there are mistakes and ambiguities which I know will confuse the visitor. The problem is that when I mention it to the web designer he goes into defensive mode and the conversation becomes awkward.

Sometimes I say to myself, Brian, keep your mouth shut and let everyone get on with it. I have found this to be unsuccessful. Rightly or wrongly, I feel it is my duty of care to a fellow human being to at least let them know what I have seen and give my impressions. As I have made it plain many times before, when I’m in a public place or on a journey, my antenna are twirling in the breeze for anyone’s perceived need or the possibility of something in common that we can share over a few sentences. For this reason, I find that the phenomenon of loneliness is for the most part a distant memory. The moment I realise that people like to talk,  providing it is done in a polite way, then the whole process becomes a pleasure. I realise that I’m a bit spoiled living in the countryside where everybody tends to do speak openly but I did the same in London and I never had any problem. Occasionally, I got people in a bad mood but – never mind – so they are in a bad mood so let them be. Send them a little blessing and move on.

So the question is, under what circumstances should I interfere or interpose and under what circumstances should I keep my mouth shut. Let me deal with the latter first. When two people are engaged in conversation, even though I could make a contribution I would definitely keep my mouth shut. There is such a thing as privacy in public. The second situation where I wouldn’t say anything is if they were not giving out any friendly body signals and this applies both walking in public and with someone who is doing something that is obviously inappropriate. The third situation is if a person under the age of say 16 where my talking might be misunderstood. I would only talk to young people if they were in groups.

I suppose a classic good example of interposing is when someone has their collar up or their flies undone which case they are grateful. I find that if you are critical of something they’re actually doing, even though you mean it with the best of intentions, they often get defensive. I find it very difficult to avoid defensiveness in people and the best way I’ve found around it is to make a joke, an oblique comment and have a sense of humour. I think it is a very bad mistake to start off with a negative comment. Why rush in?

If we start with a generalisation we will give the person time to tune into us and come to the realisation that we are benign. The next thing I would do is to start with a compliment or positive comment about what they’re doing. The next thing I would do is draw attention to something which I was confused about. It would never be ‘wrong’ – mind you – but a matter of confusion or the need for further clarity. In other words let them discover their mistake through trying to make sure that you are not confused. The chances are that they will thank you for your intercessions excepting they are inherently insecure and defensive individuals of which I know there are many examples. On these occasions I would be philosophical. I did my best. I would not want to feel later on when something untoward happens “I wish I had said something but I didn’t want to upset them”. That is a bit cowardly and I would not want to live with that.

Another category of telling people what they may not want to hear it when someone has halitosis or bad breath, or another unpleasant habit that they may not be aware of. I would restrict the attempt to tell them unless you know them. You could tell your them that you have had this problem as well and this is what you did to solve it. I would not is doing on your way to a dinner party go or anywhere in public and I would only do it if it is consistent and excessive. I have tried this once: ‘do you have anything wrong with your gums or teeth?’ or  ‘I just wondered if you were aware that it was reflecting your breath’. I think we should try and be loving and understanding and say that this affects many people who are not aware of it. You don’t have to make ultra personal remarks though it’s a good idea to be direct.

We have to face the fact that in this society nobody trusts anyone very much although they want to think of themselves as trusting people. When push comes to shove, the questioning starts. Therefore, we have to work very hard in the first few seconds to establish our self as an honest person and this is done partly by what I call the energy field or aura. In other words I  carry my smile and good attitude around me like an invisible halo. It can be done but it takes years. I believe that we all have detector mechanisms if only for self-preservation. I do rely on my own mechanism on a daily basis or rather I could say minute-for-minute basis. This makes the difference to me between life and existence.

This evening I attended a small meeting of the committee of our Men’s group. It took place in a historical catholic church which in the old days was a barn. We arrived at the door to find a sleeping figure who due to the kindness of the priest was allowed to sleep for reasons best known to themselves in the porch. We entered the small committee room to find another homeless person completes with cans of lager. He excused himself and said he was not normally there. He said he was looking for a place and had some money but no one would offer him any accommodation. He said from time to time that he felt like topping himself I guess out of sheer frustration. He was a pleasant enough fellow but one of the many invisible sufferers in a so-called civilised society.

The meeting itself consisted of going through the constitution of the group. It shows to me that you never get something right the first time however good you may be and how much you understand your subject. There was a repetition no doubt due to the enthusiasm of the original writer to make a point but we realise that a lot of it could be precied without loss of meaning. At the beginning, the task the committee meeting seemed boring but we occupied ourselves for the best part of 1 1/2 hours with various bantering and teasing. Someone mistakenly volunteered themselves as secretary, “nature abhors a vacuum” someone said that this was cause of much merriment. We did achieve something because people were not afraid to state their views but in a mode of fellowship and good humour.