Today Friday we decided to go for lunch in a little place in the middle of nowhere – well not quite in the middle of nowhere because it’s on the A 39 – Chewton Mendip no less. All over the countryside, there are remnants of the old road system built for horses and carts. It’s almost a ritual to go and visit this stream which today was lively in the extreme. Water takes ages to come off the hills and fields. It is as pure as anything, you could drink it, and it gushes along. Streams appear in the middle of grass.

There is something very energising about feeling the warmth of the rays of the sun and looking at the buds in the hedgerows, and enjoying the primroses and tulips.  There is something very atavistic about coming out of the darkness, enjoying the lengthening of the day and stretching one’s limbs whilst walking or exercising. I understand that in Scandinavia the rate of alcoholism and suicide is quite high and I suspect this may have to do with the darkness in the winter. However if official figures are to be believed, the highest alcohol consumption is Belarus at 17.6 L of pure alcohol equivalent per person per year followed closely by Moldova, Lithuania  and Russia. Finland is 16th at 12.3 L, the United Kingdom comes in 25th at 11.6L. Right at the bottom of the alcoholic list, we have in 191st place, Pakistan, at a mere 0.l L per person per year. I think it is safe to say that Pakistan is a teetotal country if not a peaceful one.

I don’t want to sound too self-righteous about this but I think alcohol may be an attempt to compensate ourselves for being outside the rhythms of nature. Nature speaks not with words but with vibrations and energies. Since watching the two-hour video on the hypnotic effect of mobile technology I have resisted checking my phone every few minutes to see if there is a message. If it’s really important, people will call me but most of the material can wait. Listening to nature, I mean really listening, can be a very rewarding experience because you hear the rustles of unseen creatures in the earth, the wind rustling the leaves on the trees, the birds singing their hearts out. Is this not a form of therapy.

I also believe in dragons and fairies. I think that they are as alive as we are. I believe that fairies watch over you and guide you in your life . Like your outer conscience. I can sometimes hear them talking, and sometimes I answer back. I believe they are there waiting for us to figure them out. They are real.

This was written by youngster under 18 and although the style is not very profound there is an innocence there that I find very attractive. I wonder if somehow we consider ourselves too sophisticated to benefit from nature.

I read a study conducted in the UK of a month long nature challenge which involved people “doing something wild” every day for 30 consecutive days. The study was conducted by the University of Derby and The Wildlife Trust to measure the impact of this. They said “intuitively we knew that nature was good for us as humans, but the results were beyond brilliant”. The study showed that there was a scientifically significant increase in people’s health, happiness, connection to nature resulting from active nature behaviours such as feeding the birds and planting flowers – and the effects did not just last throughout the challenge but they were sustained four months after the challenge had been completed.

Effects included improvements in health and happiness, a decrease in stress, increase in self esteem, and unleashing of creativity. With children the mitigation of symptoms of so-called Attention Deficit Hyperactivity Disorder was noted.  I personally think this is a major disease describing children who are bored and restless  feud with the school curriculum. Adults reported a decrease in depression and anxiety. It is difficult to think of any disadvantages of being in nature.

Although we can theoretically enjoy long periods without nature we probably do not notice our increasing tension and dependence on artificial stimulants such as alcohol and comfort eating. I wonder what it would be like to have six months without any form of electronic apparatus especially those connected to to the Internet. I’m sure I would experience withdrawal symptoms. Maybe someone is trying to get hold of me. The advantages would be that I could spend much more time reading especially quality books, listening to Radio three which is the source of wonderful classical music and maybe focusing on people a little bit more. The problem is that we are surrounded by a cocktail of electromagnetic waves at various frequencies. I think the bigger shock would come if we were to go in areas, perhaps in a valley, where there is no mobile signal. 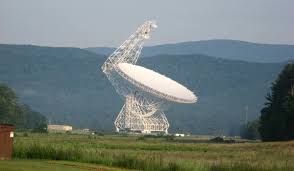 I discovered to my delight a place called Green Bank in West Virginia in America. All mobile phones are banned on payment of a fine and even microwave ovens are frowned upon. The reason is that in the area there is a huge telescope which is so sensitive that it enables researchers listening to exploding galaxies at the edge of the universe, a signal that is so faint it’s about 1 billionth of 1 billionth of 1 millionth of  a watt. A cell phone emits about three watts and can swamp the sounds that are teaching astronomers how the Milky Way was formed and how it is still evolving. I would love to go and stay there.

Anyway, good night to you all. We are threatened with more snow tomorrow coming from the East so we shall hunker down and survive somehow.