This is a special day. My wife is treating me to a day out. It is a special day for another reason. She has been invited to a donors’ event for an organisation called World Vision which encourages individuals to sponsor particular children in various parts of the world, and also gives sponsorship to people in country areas in for example Africa who have no water. She has been sponsoring regularly for the last 30 years. This was her first live contact with the organisation as such.

The venue was the Chapter House in Gloucester Cathedral. I was very impressed by the makeover of the exterior has and the call to the mentality of the modern materialist person. Quite frankly, Gloucester itself is a dump. There are the usual allocation of empty properties but there is a lot of unemployment, drug use, apathy I would say which tends to give the centre a rather scruffy look of the county council would be horrified if I said that.

Prior to the event we went to Witherspoon’s which has taken over and converted a huge theatre in the central square just by the bus garage. The food was adequate but no more and the place was very busy indeed. I suspect that Witherspoon’s could well threaten the numerous local pubs that still survive in the various side streets.  Apparently, in the UK about 20 pubs are closing each week.

The world vision event was timed to be from 2 PM to 4 PM we turned up at 1:58 PM  to find everyone seated at circular tables with name tags  immaculately printed with our names. 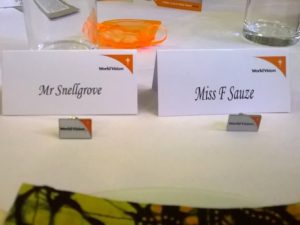 A nice touch.  Tea and coffee had been served prior to the event so we were one of the last to arrive. I learnt a lot from the presentations such as their work but before that I will mention the person with whom I was allocated to sit. She was called Jane. I don’t know whether she had had some sort of advanced neuro disease or had a brain aneurysm or heart attack but she was unable to speak.

She was attended to by her very loving husband who cuddled her 90% of the time. She made strange noises and burst out laughing in a rather maniacal fashion. The husband responded by again putting his arms around her. I was very impressed by the quality of his love. She was in a wheelchair by the way and her right arm kept on flopping over the rest so I gave myself, jokingly, the unofficial task of arm rescuer. Jane was unable to respond to any of my fairly banal conversations so her husband John filled in for her. They had apparently been all over the place doing good work and taking part in projects including several visits to Zimbabwe .

I learned quite a lot from the talks themselves of which there were three, not so much the content of the manner of delivery. The first lady who spoke wanted to tell us about all her life history before and after she came into the movement. I felt there were some personal elements her life that we did not need to know. I feel that sometimes people can become a little bit self-indulgent in what they say. The talk can drag on a little bit. However I think it was about 20 min and it was not so bad. One thing that did irritate me was her description of her own situation and then asking the audience “has anyone had an experience like that?”. It did not really matter quite frankly and seemed to me a little bit contrived but the most important point is that the talk came from the heart and this woman has obviously given an enormous amount.

We had another talk from an Australian who gave many examples of how groups of people sponsored projects and how the life of the recipients increases in quality. He said he had learnt to think in the long term and they would typically make a 15 year plan for a given project or area during which they would come on the scene, evaluate and engage and then review and reflect on what had been achieved. I found his delivery very measured, a bit like music, and not once did he refer to notes.

The third person who spoke was fairly high up in the organisation I didn’t catch his name. He had to face the inevitable questions arising from the current scandal with Oxfam and was disappointed that a popular paper had chosen to intermix old with current activities to make an implication about World Vision. He says they always have security checks but that some other people who were accused of bad behaviour had some time ago managed to get into the organisation as temporary staff. Finally, he complained about the invisible profile of this very large organisation.

I the went up to him afterwards after I realised something. World Vision has no logo. I said that a logo is the most recognisable being and gives out subconscious messages and associations. One picture is worth 1000 words. Without a logo they were at a big disadvantage. People always go defensive so I did say to him beforehand, please don’t hit me. He was not defensive.

The boss said that he was aware of internal initiatives to beef up the public relations and the image and I said not before time though not in those words. I said that if they got a logo and a new image even though it would be expensive, they would recoup the cost within six months. Most of the charity logos are not very good in fact very ambiguous and amateurish because the people who run the charity don’t want to spend money or waste money as they would consider it. The artwork is often produced by volunteers or friends who offer to ‘have to go’ and they are then judged by other people who haven’t a clue about anything. This is not the way to go folks.

What impressed me about the whole presentation was the attention to detail. The place names on the tables were lovely. The circular tables were laid out with napkins made from batique by some ladies in Africa. The speakers spoke clearly, kept to the point and did not ramble on. The images on the screen were not big enough to see detail from the back of the hall but then that was not their fault. The speakers were fulsome in their praise for us as sponsors keep the whole show on the road. The meeting started on time and ended on time. Well done, people. Look after your sponsors and people will go on giving. Sponsors need to be valued not taken for granted even though that would never be the intention of the Charity.

The cathedral itself is making great strides as the following pictures will show. The courtyard has been embellished with amazing blocks of stone. 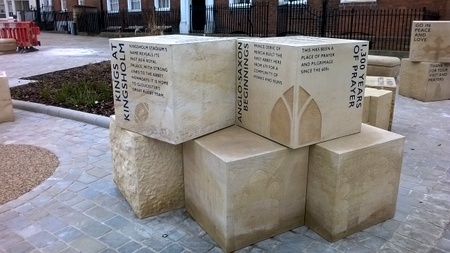 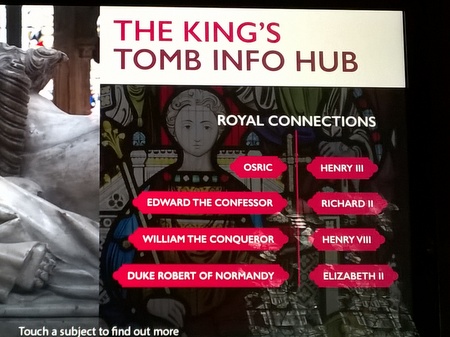 Touchscreen controls enable you to find out about more of the history of the Cathedral.