J D Wetherspoon’s  “The George” in Croydon is not where you expect to find works of art. This establishment early on a Saturday morning had a very quiet ” the morning after”  feel to it. There was a couple with their child eating breakfast, two people sitting on their own having a coffee and reading the paper and one person of indeterminate age staring into space. I had been looking round for somewhere to have a decent breakfast and because I’m basically a Wetherspoon’s fan I decided to give this one a go. I don’t know what it is about this chain but I feel a type of family atmosphere where you can go in with others or on your own and you will still feel comfortable. I’m sure the spirit of the founder hovers over all his establishments.

We would to breakfast on offer one was an all dancing or jumping breakfast but the other one was a traditional breakfast which I thought I would try which came out at the princely sum or £3.40. I decided to have a self-service coffee which cost £1.25. This is an excellent idea. You pay your £1.25 and get an empty cup to make whatever sort of tea or coffee you want. After a few minutes, the breakfast came. This was not just any old breakfast (see image) 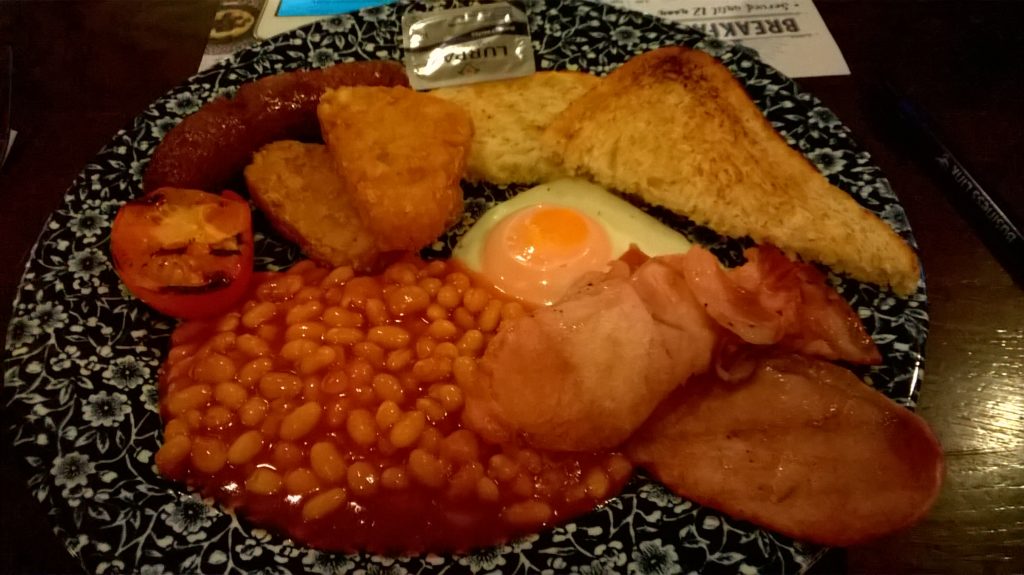 This was not a question of someone applying a formula but someone plating something so attractive as to be virtually a work of art. I love the touch of the half a fried slice of bread plus another slice of nutty bread together with a hash browns, decent sausage, generous amount of baked beans, slightly under cooked tomato but never mind and it was a pleasure to eat. You would think there is a limit to what you can say about a breakfast but I called the manager over and congratulated him on the quality of the food and the service. He beamed, and said, ” that’s what we do”. Indeed you do sir and I shall be back for more

Walk to East Croydon station via the Croydon underpass. I must be at Friends Meeting House, Euston Road, at 10 AM 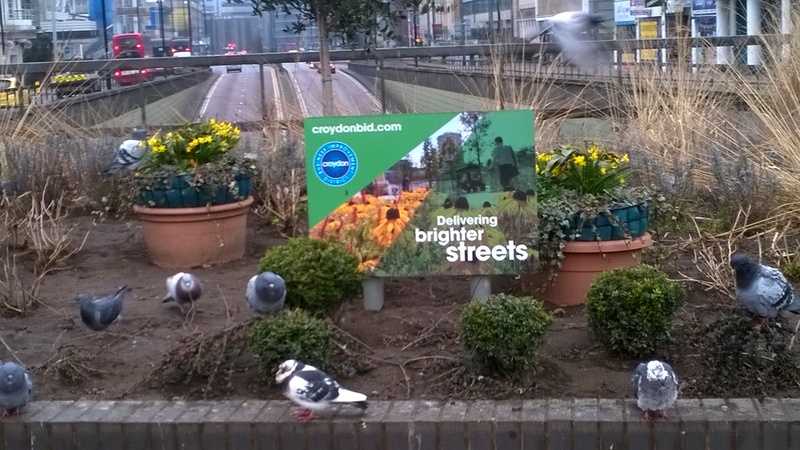 I came across a really admirable piece of landscaping to brighten up an otherwise brutalist 60s and featureless walkway. The pigeons obviously thought highly of it but the idea of “brighter streets” sat very well with me and brightened my journey. I’m very much reminded of all the hundreds of paintings that are hung in the Royal United Hospital in Bath. It does raise the spirit, mine anyway, when you pass them.

East Croydon station is one of the busiest in the southern region of our rather chaotic and expensive transport system (sorry visitors from Europe we are the most expensive and the most incompetently run but we manage somehow). I love the idea you don’t have to bother with tickets any more. You just fish out any credit or debit card with the touchless sign. It does just the same job as Oyster Card for the same price. It is important that you use the same card at the end of your journey at the beginning, it’s called touching out, otherwise the system would charge you the maximum fare for the distance you might have travelled. At the end of the day, the system will figure out the number of journeys you made within the zones which will be capped at a certain maximum figure. You can use the card as much as you like and it will not break you. Do not even think of using cash because you will pay a fortune.

We met at the Friends Meeting House. This is the headquarters of the Quaker movement and its size and influence should not be underestimated. We had our meeting courtesy of one of the staff in the offices for which we therefore paid no rent. There must have been about 40 desk positions. Religious and spiritual groups get virtually no press coverage. I was listening to the news this morning and it is more or less a collection of disastrous events, people making falls themselves, people behaving badly, extremist and polarise groups clashing with each other, I have made it a rule to start and end each day with a reading from the Bible or listening to uplifting material such as classical music or a sermon on my favourite radio station, Trans-World International.

The meeting today took 7 1/2 hours, about 10 hours less than the inaugural flight from Perth to Heathrow. A little bit of history in the making. I hear they are going to try a Heathrow to Sydney route. It is a great relief when attendees at a meeting are on the same wavelength, where there is no impediment of politics and infighting, where there is no point scoring, where everyone believes in the supremacy of love and caring for others.

Our main job was to figure out a constitution for Ubuntu which is our sharing of skills, abilities and energy which is designed to be a substitute for money. The main task was to find a form of wording that would be acceptable to the Charities Commission. There are 13 criteria for charitable organisations. We decided to choose one, which was the advancement of education. The Charities Commission is a very conservative organisation and you have to make sure that the wording of your application will not raise any red flags. You would for example hesitate using such words as “consciousness” or “awareness”. They are wary of political movements disguised as innocuous meetings for example.

We also had to figure out the name of the charity. I’m a great believer in cooking time. The brain loves to work but it needs time. We went about as far as we could go but decided that in the forthcoming days we would think about a name. As I often remind myself, there is a time for everything and for everything there is a time.

The London Underground system has been redesigned to accommodate the new crossrail system and I lingered at Tottenham Court Road station to see the changes which will become fully operational sometime this year 2018. 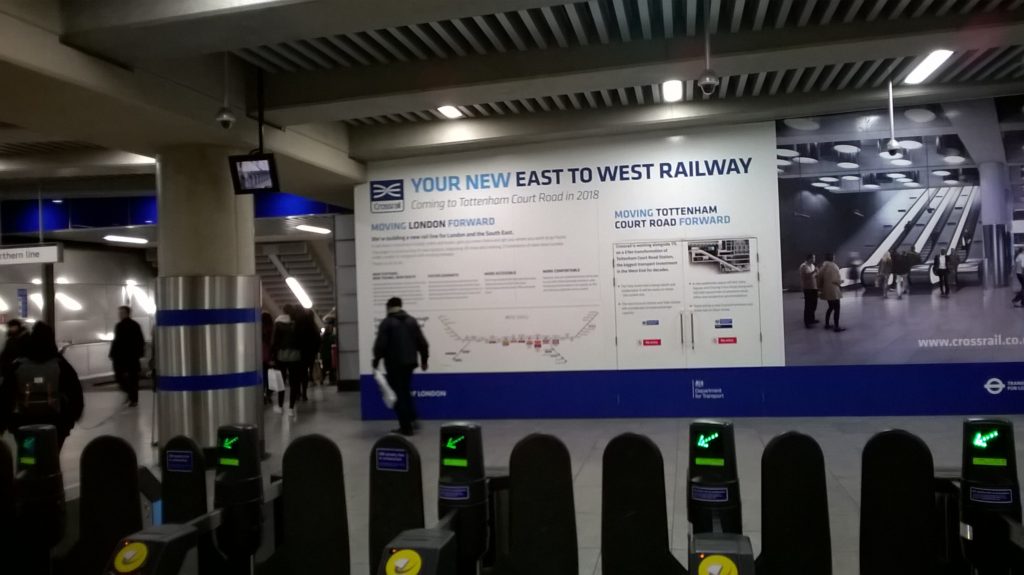 Whoever thought of introducing pianos at stations and other public places needs an award. It provides a gathering point of community, a bit like a flash mob, which appears and disappears. You could call it an instant art installation. On my way back to Croydon I stopped off at Wetherspoon’s, Victoria branch. I have never known this pub to be anything other than full but as I walked around with my drink I espied a table with one man sitting at it of middle east origin. I nodded, got a lot back saying that the place was free and started to enjoy my drink. I think it was he who opened the conversation. He told me he was from Kuwait and when I nodded he asked me if I knew where Kuwait was. I suppose he’s not used to knowing where his country is that I most certainly did. in case you need reminding, here it is, one of the lesser-known countries bordering the Persian Gulf and adjacent to Iraqi.

The man had worked in the Kuwaiti Army for 20 years, to the day he proudly told me, and was entitled to a pension. He chooses to come to England frequently because he likes the people. I asked him how much oil reserves there were and he said ‘about 150 years’. He said that the ratio of visitors and workers to in the indigenous population is about 4 to 1. Had I not needed to catch a train I would certainly continued conversation but he was so friendly I could not resist shaking his hand with both of my hands and wishing him all the best.  This is one of the reasons why London is brilliant. You get people from all over the world who have their story which is normally interesting and different.