My Volvo chose the perfect time to break down just before the long holiday weekend. The obliging RAC man turned up and quickly (50 seconds) discovered that the alternator had packed up. He accompanied me to my local garage where I left the car for action next week. Interesting synchronicity here. I returned to my home after having been told it would be a three hour wait but 45 minutes later I got a text message saying that Chris, the engineer, would be with me in 20 minutes. There was no way I could get back to the car in that time. At that very moment, someone who I did not know, a carer for the old lady across the road, just happened to be leaving the place where they were working. I explained my plight and they took me straight away arriving just 2 minutes after the RAC man turned up. I’m so grateful for the so-called little events. They do affect the stress level quite a lot, at least with me they do. I’m the person who likes things to be in order. It wasn’t an absolute A1 total disaster but it does disturb my day.

I forgot to mention that I have been a frequent contributor to Soundcloud and have about 85 three-minute recordings on various philosophical matters and 64,000 followers. I need to make an audio for another purpose so I just revisited my past life and I thought you might like to hear one or two examples. 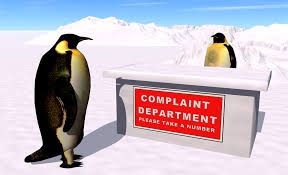 I wanted to mull over the subject of making a complaint. I love the word ‘mull’ which is a verb without an object. It means to study or ruminate or ponder or think about carefully. I have been reflecting on the last half a dozen times that I made a complaint or thought of making one.

The word “complaint” has two types of meaning. The word itself originates in the 14th century where it meant “lamentation, expression of grief” and also “expression of dissatisfaction of disapproval”. Its roots lie in the Old French complainte. The use of the word to describe a body ailment, a cause of pain or uneasiness dates from about 1700. We now talk about something “giving me grief” said that could be seen as the modern equivalent. Anyway, back to my examples.

I thought about complaining that my car was taking rather long time to service. I then decided to turn the complaint into a question to ask if there was any particular problem with the car and tried through gritted teeth to give the garage the benefit of the doubt. In all honesty they have been pretty good to me over the years. It appeared that they were waiting for a part so my patience was tested but that was the extent of it. The receptionist is quite a nice girl and has to deal with all sorts of chauvinist men and I really didn’t want to upset her and as it happened it was not necessary.

I did actually complain to my bank that it took a long time for my text alerts about the incomings and outgoings of my account to be sent. I wrote a secure letter in the normal way and received no reply. I found that I could not bring myself to telephone the wretched banking system where you have to press lots of buttons, being told that the call will be recorded for quality control purposes, listening to the most chinless music you could probably imagine and then finally talk to an 18-year-old girl who just reads a script and uses standard language of apologies and assurances. I dread hearing the standard phrase “is there anything else I can help you with”

I commented adversely about the quality of a photograph of the managing director of a company with whom I deal. I wanted to do my Good Samaritan ‘concerned citizen’ bit and say that the image portrayed would not do the company any good. I disguised the complaint as customer feedback and was very nice about it. I did not complain to the editor of the magazine of which the photograph was a part since she did not know me. I spoke to the manager of my local branch and I know that he had a word with her. Shortly after which she left her position and someone else who has come along seems to be doing a better job.

I made a very minor complaint about papers not arriving during the time of the snow. I have to be careful how I speak to the local newsagents for two reasons. First, I need to keep on good terms with them anyway because they do me a service and secondly this is a gossipy neighbourhood and the word gets around. The parents of the newsagent live opposite me and I don’t want to get a bad reputation with my neighbours. I entered the shop and made a very bland comment about the non-delivery and they said that they themselves had not had a delivery for two days because of the weather so I ended up commiserating with them.

I complained, or should I say asked, someone to provide a mailing list because I wanted to do a large mail out but in spite of being asked four or five times, the person concerned could not to summon up the willpower, the time or the energy to comply. Since I do not know them, there is very little I can do and it is all done on a voluntary basis anyway so I just had to accept the fact that this is an imperfect world and find other things to do. I’m now trying to work through an intermediary who does know them.

In public, I do hear people complaining or should I say ranting and it is quite obvious to a bystander like myself that this is a complete waste of energy because the shop assistant or whoever just stands there smiling and taking it in their stride because they have to. Increasingly, I’ve seen traders and so forth give as good as they get. They would dearly love to punch someone in the face I’m sure but it’s not worth it and they would probably get sued. I do feel sorry for young girls trying their best who get abused because they’re not yet tough enough to avoid taking it personally. Our Doctors surgery has a zero tolerance towards any sort of aggression and they can and do throw people out if they misbehave.

Overall, my wife and I have very little to complain about. We ritually complain about the lack of good weather particularly during March that is more a grumble than anything else. I try to remember that others have far more complicated lives than we do and they have far greater burdens to bear, financially and psychologically no doubt. I trained to be a Professional Life Coach and we were encouraged to draw information from people and not tell them what to do and this has stood me in good stead on more than one occasion.

I think deep down, people in public service want to do a good job but sometimes they are victims of the system. Their wife could have just asked for a divorce the previous evening you just never know.