Today is the 6th anniversary of our arrival in Somerset. On that day 24th November it was also raining. Life has changed in so many ways that it is difficult to enunciate them in one go. I met the mayor of Midsomer Norton fairly early on in our time. He said that things would happen for us but 10 times slower than we would like and he was absolutely right. We are now on more than nodding acquaintance with about 50 people for various reasons and in various circumstances. The number of people who have had my lifestyle and experience is somewhat less than 0.01% so we have learnt to draw a little nutrition from a lot of people.

We both came from families that were not functional in the emotional sense so we have had to learn to make up for this by being more rugged and outgoing and to a large extent we have succeeded though you cannot turn the clock back.

Before I continue, I must not forget to mention a very important feature I was listening to on the radio (Trans World Radio) this morning. I heard an interview  with Archbishop Benjamin Kwashi, from Nigeria who is in UK to raise awareness of the amount of killing and torture of Christians in his country. He himself has been the subject of three attempts at murder.. On the first occasion he was due to come home where unbeknown to him, bandits were waiting. The Archbishop was delayed so instead they got hold of his wife Gloria, and beat her so badly that she lost the sight of her eyes for 6 months and only after 5 operations in America was her sight restored. She is a woman of enormous spirit and today looks after 50 homeless children in her house.

The second occasion was when ‘they’ came for him when they were both at home. He was kidnapped and taken away to be killed in the countryside but then for some reason the bandits decided to kill him in his bedroom at home. The Archbishop asked if he could pray and when he opened his eyes for some reason the intruders had fled.

The third occasion was when they came for him when they were both at home again. They rustled his cattle and demanded that he come out of his house but he refused to do so. A neighbour shone a torch at the intruders upon which he was shot dead. Have a look at the Archbishop and his wife being interviewed.

We have no right to complain about religious freedom; it is more apposite to complain about the crazy left the want to marginalize Christmas on the grounds that some people might be offended. Never mind that all major religions preach tolerance and love. In the Minds of these deranged people that counts for nothing. This is one of the results of political correctness, one of the evil seeds of this movement which was formed in 1923 and named the Frankfurt group. (Germany). The centre relocated to New York and thence to California.

I can look back on my time here with some pride. I have started a diary which I have maintained for 2 years now and is nearly up to half a million words. I’ve started a large website 5Gexposed.com revealing the dangers of both 5G and of smart meters. I have become chairman and secretary of my local Allotment Association and run a happy ship. Francoise has taken up with yoga and she goes to a painting group once a week which she enjoys enormously and shows signs of progressing from strength to strength. We do garden clearance to supplement our income and to keep fit.

I cannot say that we miss London but we do enjoy going there from time to time as we are doing next week for a conference. When I go to London there are just too many people for comfort and it takes me a day or so to really adjust but we absorb what we can, particularly going to all the art galleries. There is the city gallery in Bath but that cannot compete with the Tate galleries, the National Gallery, the Portrait Gallery, and all the great museums. I love the fact that I don’t have to buy an Oyster card; I just use my debit card instead. You cannot spend more than a certain amount of money on travel each day in other words there is automatic capping. 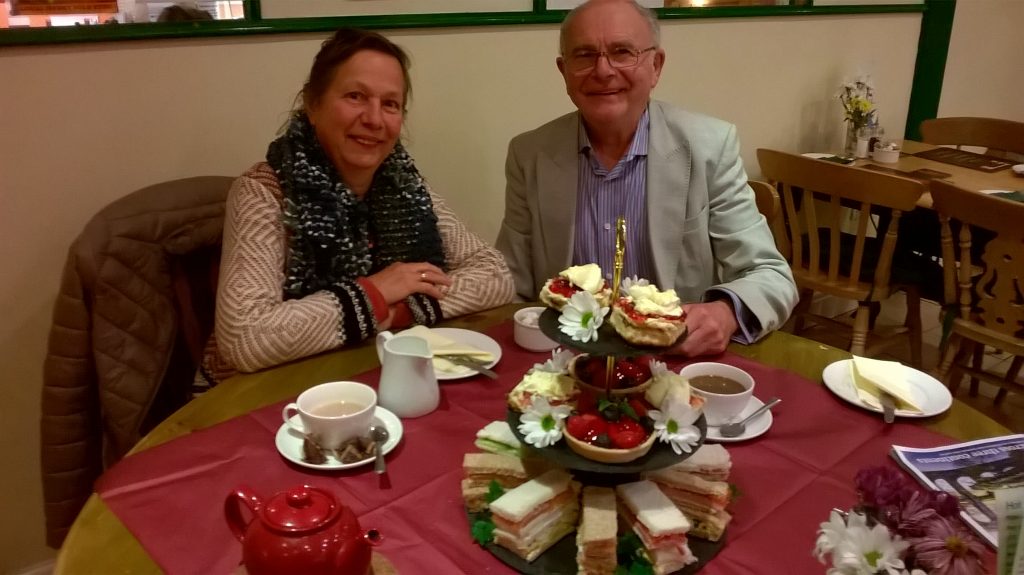 This afternoon we went to have a celebratory high tea at my favorite restaurant. The impresario Paul Hartley was there. He has been in the service area in Pubs (he started in Putney) then bought a local pub then this restaurant, Hartleys, where we are sitting in this picture. He has written an amazing number of quirky books such as ‘The Marmite Cookbook’, ‘The Little Book of Marmite tips’, ‘The Heinz Tomato Ketchup book’ and many others. It sounds unbelievable but a trip to Amazon.co.uk will confirm all.  …Search  “Paul Hartley”

We could not finish the grand repast so asked for a doggie bag (actually a plastic box) to take the balance away. While we were there, one of the serving girls said farewell to Paul. She had only worked since Monday but gave the most amazing and original excuse to Paul that I have ever heard. She said ‘we have bought a top of the range car (£80k?) and the petrol used is too expensive for me to be bought  back and forth’. We had a laugh. I wonder why people bother with such excuses when they are obviously fake. Why not say ‘ I do not feel I fit in here’ or ‘this is not right for me’.

Back home to the fire and to partake of the Magnum bottle of Prosecco that I casually bought the previous day.

I might actually switch off this computer earlier than usual.  It is Saturday night after all.