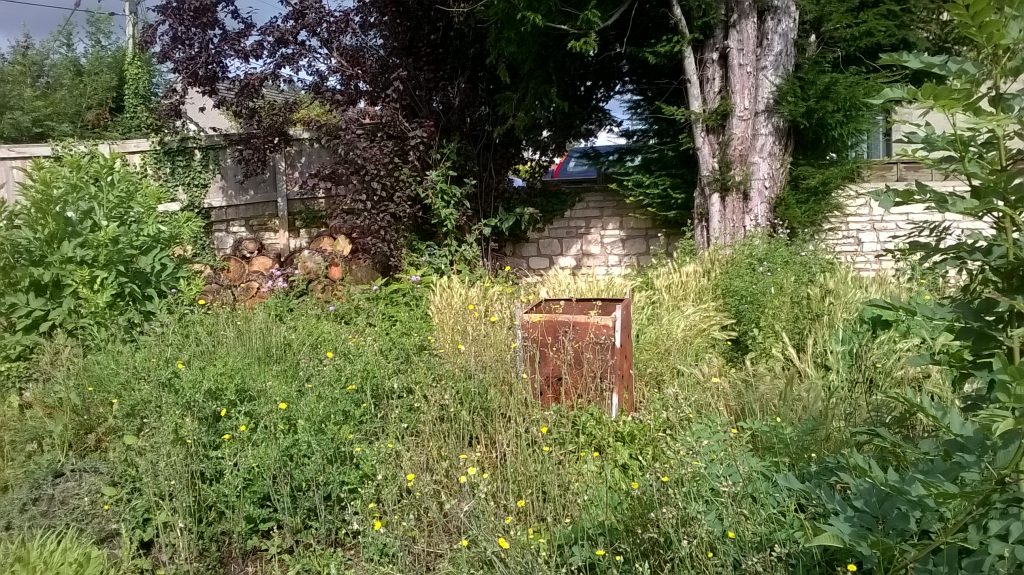 This is probably one of the least exciting pictures I have published. The customer was a widow, living with her son, who wants to sell her house which is right in the middle of Midsomer Norton and move to Wells where she and her husband lived for many years.  The only problem is that her front garden, pictured, is a complete tip and anyone coming in wanting to buy the house will be severely put off.

It took us two sessions. The first one was a brutal clearing during which we got rid of the the bulk of the weeds and filled up my voluminous Volvo V70 with spoil. The second session, today, consisted of Françoise and myself digging out each individual weed. Sometimes jobs are boring, but challenging, so we do them. This was made more difficult by the fact that the ground was a virtual mat of roots from adjacent trees, past and present. The  docks entangled themselves up with the mat so it was virtually impossible to pick them without breaking the root at some point. The area concerned was about 7 m x 4 m and took us a total of 12 hours to clear.

The customer was a bit strange. There was a corrugated iron brazier in the middle of the area, which she said would need to be used for burning important papers of her husband.  I offered to be with her because I said it was a ceremonial fire for closure and moving on and that is best done with other people. She declined, and said she would do with her son. During our work today she went off to the dentist to have a molar removed and we think she went to sleep are a couple of hours. She said she was happy with what we did and what a difference there was but we didn’t get anything from her at all emotionally. She seemed to be in a bubble. Anyway, be that as it may, it’s none of our business. She engaged us to do a garden job, we did it, she paid us, and we went on our way.

I do find these snapshots of people quite fascinating.

We have two more jobs to do this week; those will pay the expenses of the month. The weather was good today, but more rain is prophesied for tomorrow. I’m using the excellent weather forecaster ventusky.com which is miles better than the BBC version. Tomorrow, Wednesday, it looks like we are going to spend the day indoors. I feel for people who are ‘en vacance’.