Today is the first International Day of Protest against 5G. There was a planned demonstration in Bristol on College Green so after some procrastination, we decided to go. Bristol is hopeless for parking so we did our usual thing and caught the 376 bus from Farrington Gurney to Bristol bus station.

On the way, we popped into an art shop, almost evangelical in its approach. As you will see from the terms in the image they are totally dedicated to art and indeed were doing a roaring trade. 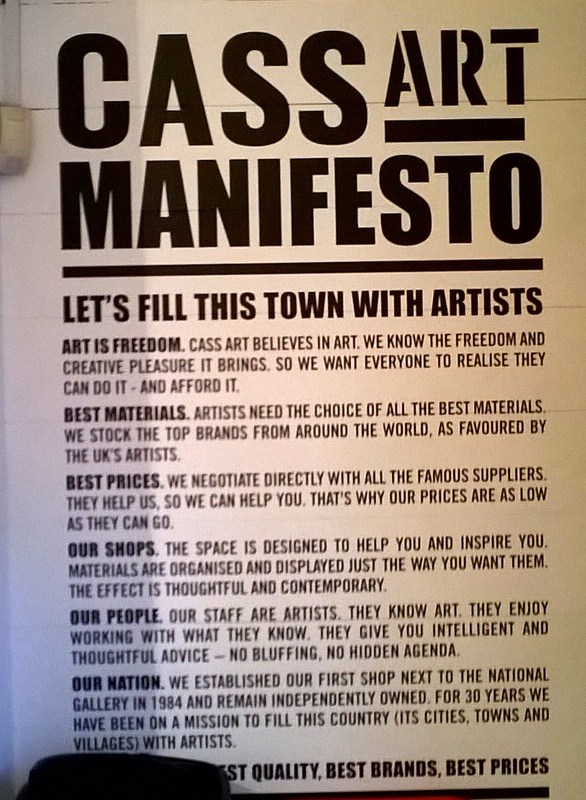 We arrived on College Green to find something else going on entirely.There was a demonstration or was it a rally by a small group of people who were drawing attention to the large number of deaths, over 4000 a year, from people who overdosed on drugs. 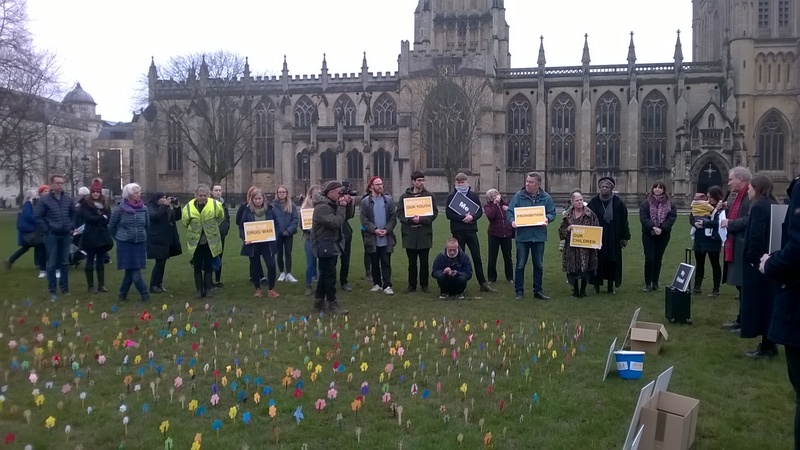 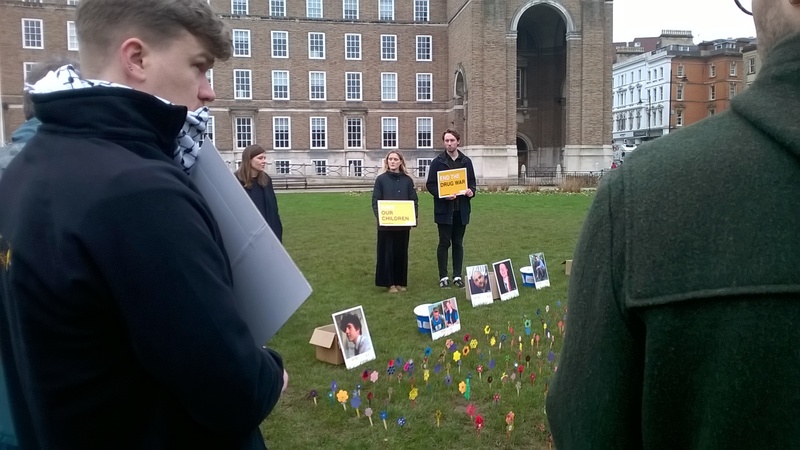 The accompanying website is anyoneschild.org Small flags reminiscent of poppies were laid out as a reminder of the number of people who had died. A number of people made speeches, including the deputy mayor and a representative of the Cathedral who led us all in prayer. I don’t know how many of us are comfortable with talking about drug overdoses. I guess it’s something that I want to pretend does not exist, so it was a wake-up call to me to be more alert to circumstances that might lead to self harm. 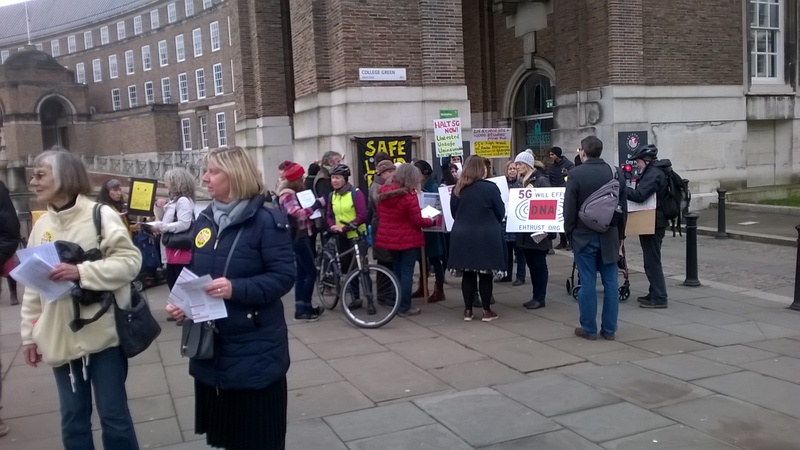 The 5G gang, about 20 people, were assembled on one corner of College Green by the road, thus hoping to catch more people. I did not feel entirely comfortable giving out leaflets but Françoise, who was with me did so with some enthusiasm. Most people were either not interested or said that they did not feel that 5G was in any way harmful. The problem is that Bristol is the technical city that serves the South West so a large number of people are involved in IT so I wouldn’t expect many enthusiasts. 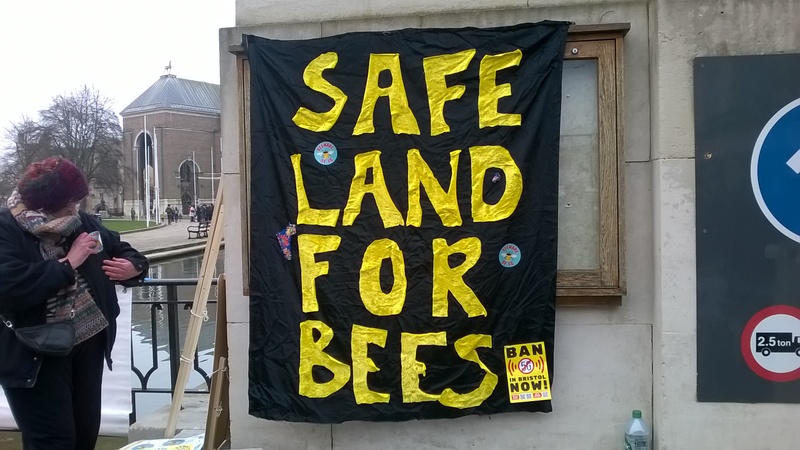 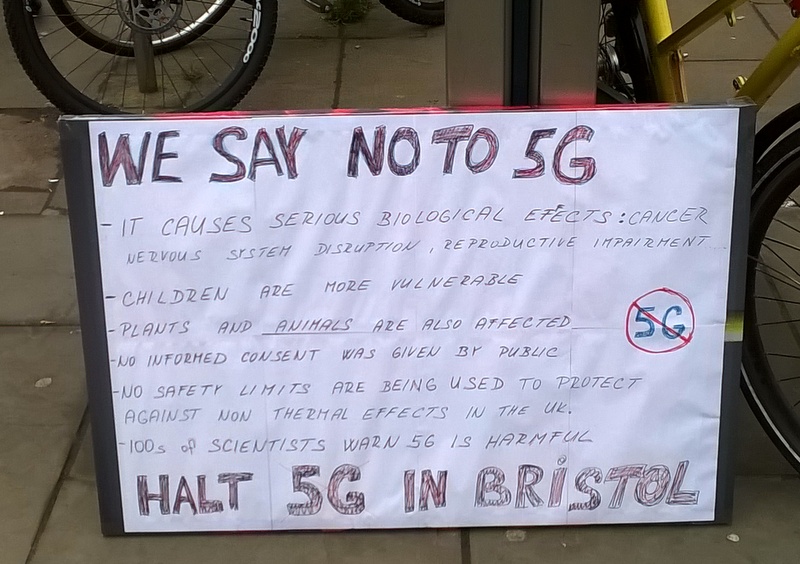 Most people on Saturday morning were on a mission, in a hurry, and did not even want to stop and consider. I should have thought along my meter which would have shown people the effect on EMF radiation when a mobile phone is used but I think that had I bought it along there would not have been that much opportunity to demonstrate. If I go to another demo I will try it.

Anyway, we put in an appearance. Hopefully, a few passers by will be triggered to think and reconsider their position. This is a real David and Goliath situation with billions of pounds of investment throughout the world so the left brain says that a group of people standing around talking to others for a couple of hours will make no difference. A blade of grass cannot see the lawn of which it is a part so maybe the cumulative effect will prevail but I suspect the reaction will be way down the line after people start getting ill. 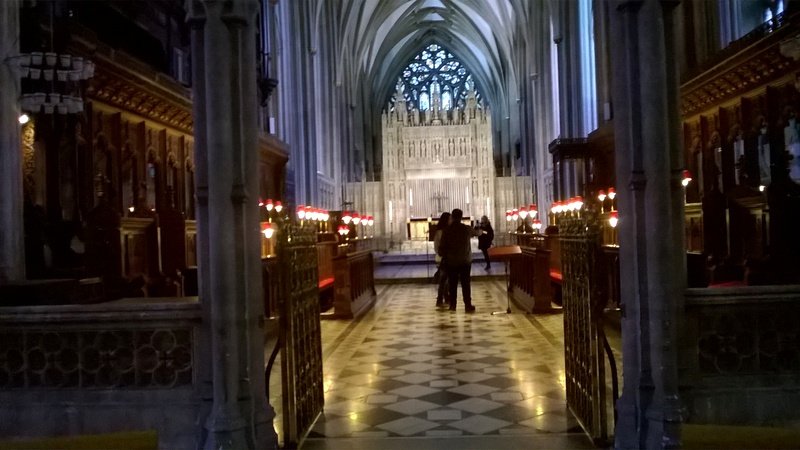 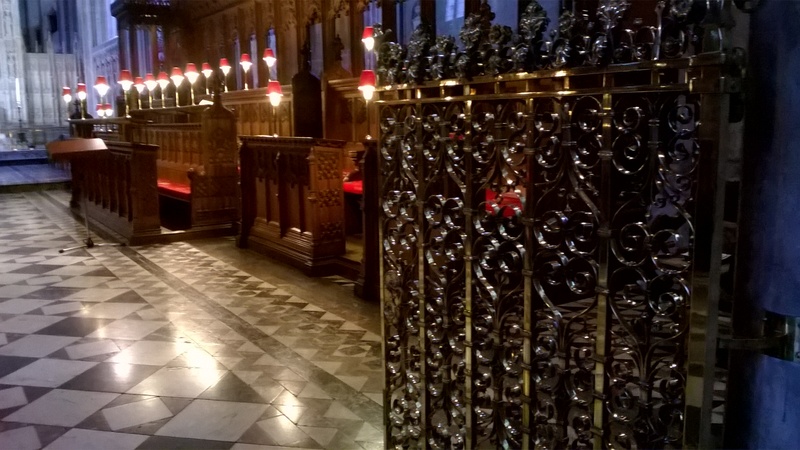 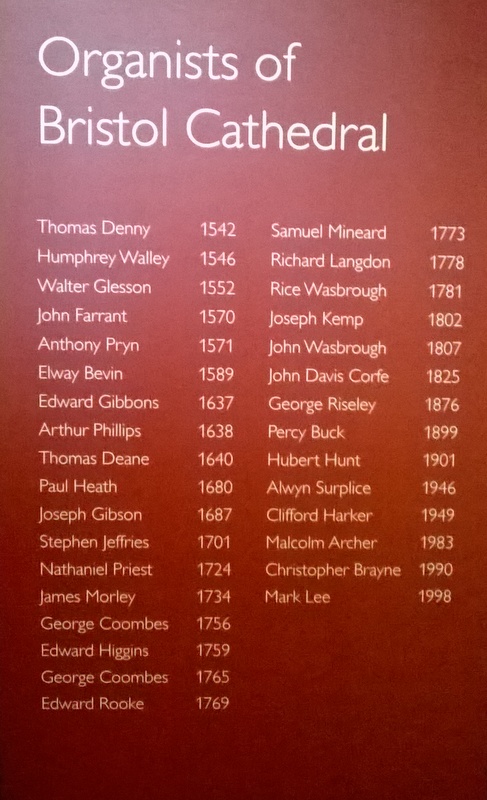 During the time that Françoise was giving out leaflets I had left the group to its own devices and took a stroll around the Cathedral. It is by many standards a modern Cathedral, nearly 500 years old, compared with some of the other cathedrals. Wells is older. It was a lovely atmosphere.

I then went along to Bristol library. It is a major institution with not only books but newspapers, local records, sheet music, DVDs, and ample places to sit and work. I’m almost tempted to spend the day there in the reference library where I’m sure I will find concentration on reading much more than at home with its many distractions

We walked up Whiteladies road to have a salad and a soup for lunch. Afterwards we decided to go home and took the number 9 bus, apparently going in the right direction, marked ‘city centre’. This was a delusion. We did a 25 minute journey round the north of Bristol going in a figure of eight movement. 20 min after we left the bus stop we returned to the same road about 200 m down. We wrote the event off as a joke, as an opportunity to view the northern part of Bristol which we have never done before. We eventually arrived at the city centre and after running 200 yards we breathlessly caught the 15.35 bus with 1 min to spare.

At the stop at Bristol Temple Meads, a father got on with his son. The son who must have been 5 or 6 years of age was a brat if ever there was one. He wanted to sit in the front seat on the top deck and his remedy was to scream and I mean screaming. The only thing in his mind was that he wanted the seat. His father in vain said he could not have it because there were people occupying it. After a few minutes, the two young ladies occupying the front seat vacated their seats in an attempt to stop the screaming fit. The child moved and quietened down.

We felt the father had no authority and guessed that the father was looking after  his child for the weekend having separated from the mother. The father did not appear to have any authority and was even mimicking the child in an effort to bridge the gap and ingratiate himself. So the child now knows that screaming brings a result – if he did not know that before. What sort of bad programming is that? 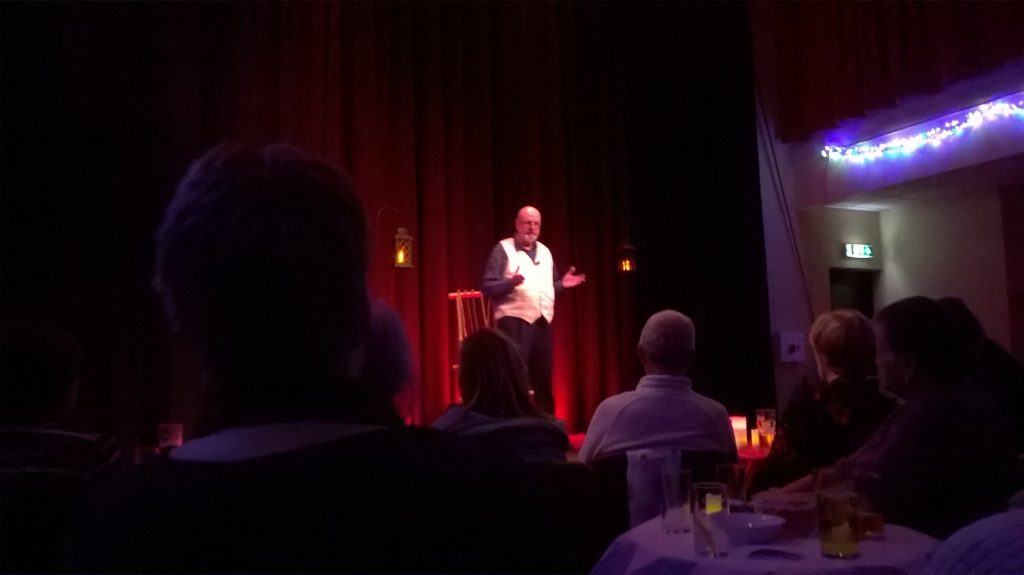 Off to Farrington Gurney Village Hall to attend the Annual Supper of the Mendips story telling group. Storytelling is a dying art. I was always told stories at bedtime by my parents and looked forward to it. We have lost this  art out of laziness and the degradation of our culture. The stories told this evening were between 10 and 15 min in length, always had a hook at the end and in most cases represented a world of magic; things appeared and disappeared, maidens wished for a handsome suitor and got more than they bargained for, and generally escapology of a therapeutic kind.

We had a pause at 9 PM for a cheese supper consisting of very good local cheese which agreed with my stomach unlike most cheeses, yummy bread, miniature tomatoes, miniature pork pies and other pies for vegans, together with a tub of apples.

We had as table companions two delightful people who had lived for 40 years in Cheddar and we discussed the local facilities. It was interesting they had not been to most of their local facilities, including the car boot fair, the famous pub that serves cider, the garden centre and we knew it better than they did. I think they were recluses, nothing wrong with that. However, the one thing that they did warm to was talking about their fascination with caves. Although they are senior, they go out caving quite regularly and I invited myself along to the next event. The husband, Tony, was interested in dowsing so that was something in common between us and he. We shall see what comes of it but if nothing does, it was still an entertaining evening. They recommended the Hunters Lodge Inn, Priddy BA5 3AR which is the local ‘step back in time’ hangout for Speleologists, in addition to their recommendation of good and reasonably priced food.

And so to bed. I ordered yesterday and received today via Amazon a food supplement called Night Sense which contains all sorts of wonderful things designed to settle the body and give a good nights  sleep. The doctor had recommended melatonin but he cannot prescribe it. Nor could I get it from the local shop, so Night Sense was the best I could do. My goodness it did pack quite a punch so I decided to take it an hour before going to bed rather than the 30 min recommended.